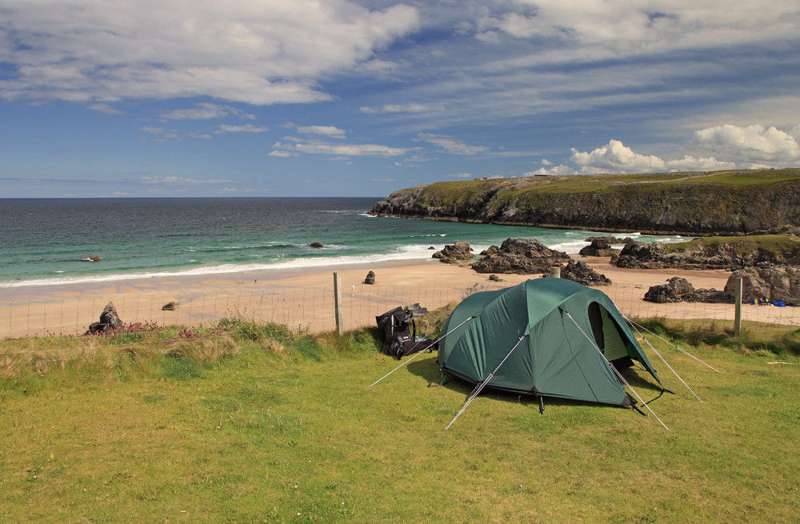 Stunning campsite teetering on one of Britain's northernmost tips

As far as remote camping goes, it doesn't get much better than Sango Sands – a lone campsite teetering on the edge of the top north-west corner of Scotland.  The inexperienced city dweller might find themselves somewhat weary, driving through endless empty and desolate scenery, but we think it's an incredibly unique and unmissable experience.  The scenery, despite being desolate, is as unspoilt and wildly beautiful as British scenery comes – and that also applies to Sango Sands' campsite.  Just as you think you've reached the end of the world, you're greeted by a camping haven, with a view stretching out to infinity. It's unique north-facing location means that in summer you can watch the sun both rise and set over the sparkling ocean.  If you manage to tear yourself away from the panoramic views of highlands and oceans, you'll find there are two fields to camp in. The most picturesque pitches are the ones by the steep slopes above the beaches. The facilities are adequate enough and are accompanied by the handy "Oasis" pub, which serves great food and often has live music.  But the real treat to this site is the impressive array of beaches right on your doorstep. Look out for the black rocks carved out of the cliffs scattered about the beaches – it's due to centuries of ferocious storms.  Despite being on the edge of Britain, there's still plenty of activities on offer at Durness, including the largest sea cave in Britain: Smoo Cave, only 15 minutes away.  For something a bit different, you could try wandering around the nearby public garden dedicated to John Lennon, who used to holiday in Durness as a boy.

120+ pitches, 64 hook-ups. 3 washblocks, 1 solely dedicated to showers. Waste disposal, dishwashing and laundry facilities. Fantastically, everyone has the use of a kitchen with free gas. Campers need to book if a hook-up is required. No campfires. Note: although the campsite itself is dog-friendly, the Oasis pub on the campsite is not.

Balnakiel craft village is an old MOD station that now has lots of individual galleries, cafés and workshops. Durness golf course welcomes visitors and has a terrific last hole over the ocean. Smoo Cave is the largest sea cave in Britain and is just a 15-minute walk away. There is a peaceful public garden dedicated to John Lennon in Durness village – he regularly holidayed here as a boy.

The Oasis Bar and restaurant, managed by the campsite owners, offers great food and local music, plus it's right next to the site!

April–October. Camping available at other times but without facilities.

This is the far north-western edge of Scotland – every way here is beautiful, but the quickest is probably the A9 north beyond Inverness then the A836 and A838 to Durness.