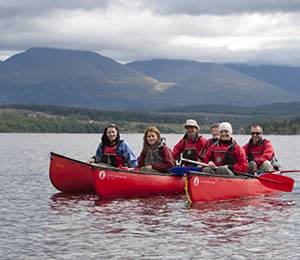 We’ve all heard of Loch Ness and, yes, her famous resident monster. Nessie may be only one of the two Scottish monsters - sadly we don’t have space here to cover Morag on the West Coast – but she definitely enjoys the more spectacular home. Indeed few monsters in the world can enjoy as grand a base as Loch Ness and the Great Glen, the rugged fault line that spectacularly bisects the nation from coast to coast. And, thanks to the new Great Glen Canoe Trail you can now head out in search of Nessie at paddle height and get to savour the same spectacular scenery – whether you get to see her or not.

The Great Glen is a staggering sight, a series of lochs, connected by canals that stand in the shadow of a sweeping fold of mountains which rise up like skyscrapers on both flanks on the run between Fort William and Inverness. It has always been popular with walkers, cyclists and boaters, but now it is becoming a firm favourite with paddlers too, both kayakers and open canoeists, and this new trail, only inaugurated this spring, opens up this Caledonian Canal artery in a way that cruisers and tour boats just cannot compete with.

It's certainly no easy option, and in its entirety offers a real test that covers 60 miles in around 5 days, taking you from the North Sea on one flank of Scotland right across to the Atlantic on the other, including stretches on the open waters of Loch Lochy and Loch Ness. It's mercifully no low-fi cobbled together job either. There is proper money behind the project, with four main funding partners – British Waterways Scotland, Highland Council, Scottish Natural Heritage and the Forestry Commission Scotland – working with the Scottish Canoe Association on the practical development of the trail. Together they have planned out a formal canoe trail with low-level landings to protect the canal banks from erosion, information boards and other facilities en route.

Not surprisingly there has been a blaze of publicity to promote the country's first canoe trail, and adventure operators too have not been slow on getting on board, with Wilderness Scotland already offering excellent five-day guided group trips designed to cater for novice and experienced paddlers alike. Of course it has always been possible to do this route on your own, but the trail makes it that much easier – and more enjoyable. In 2011 around 4000 paddlers tried out the challenge, and that number is set to mushroom. Try it now before Nessie gets word of it.