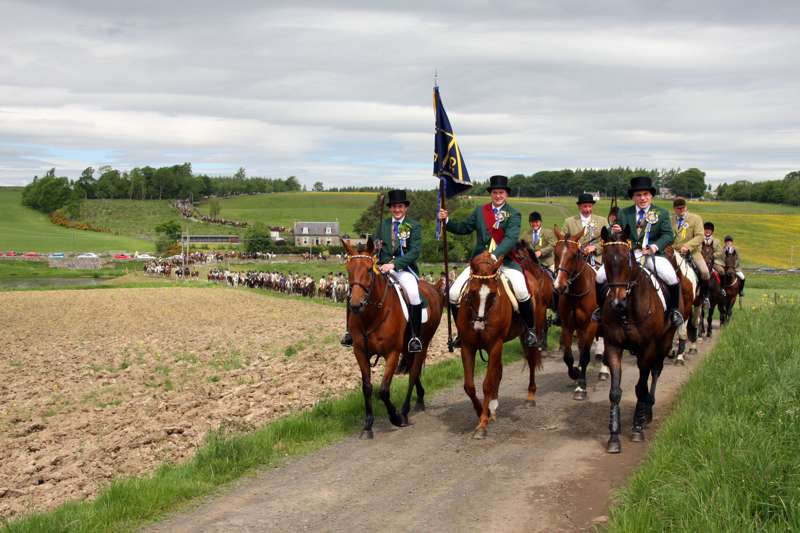 The Common Ridings in the Scottish Borders are one of Britain’s best-kept secrets. Held on the first Friday and Saturday of June every year, they are a four-hundred-year-old costumed re-enactment of the horseback patrols that were undertaken centuries ago to give the Scots early warning of attacks from their neighbours. Each of the border towns has developed its own distinct traditions, but the biggest and best-known event by far is in Hawick, about 40 miles north of Carlisle, and it's a spectacular, ritualistic affair that's well worth attending.

It is, it has to be said, a pretty traditional, largely male event, but tremendous fun for all that, with the town coming together in a riot of processions, drinking and finally horse racing – which is a serious business held just outside the town. The central character in the Hawick Ridings is the Cornet, a young local male, aged 19–24, who is chosen from the town’s population of young horsemen, and who leads the rides, flanked by his Right- and Left-Hand men. Not surprisingly it’s quite an honour to do this These guys are basically the cream of Hawick’s young manhood and all three must be unmarried – indeed you’re not allowed to marry for three years if you’re chosen. Last year’s Cornet progresses to this year’s Right-Hand Man and then on to the following year’s Left-Hand Man. The female interest is represented by the two dozen “Hawick Ladies”, chosen from the same age range as the men, who look stunning in summer dresses during the day and ballgowns for the evening’s functions.

The action starts early on Friday morning, when the pubs on the high street open early to serve fried breakfasts and morning stiffeners to the riders. You can join them, but you might feel a little underdressed – most of the riders are exquisitely attired in the formal costume of cream jodhpurs, black riding boots, tweed jackets and white silk neckerchiefs. The traditional morning drink is rum and milk. If you haven’t tried this already, it’s worth knowing that it doesn’t taste half as bad as it sounds – more like a kind of alcoholic milkshake – and slips down remarkably well with breakfast. Each rider will knock back quite a few of these before mounting their horses and galloping off at breakneck speed around the ancient lanes and narrow streets of the town. The spectacle of around two hundred horses galloping at full pelt is amazing, and, as the horses race off, the crowds follow on behind, more to see who’ll be the first rider to fall off than out of any particular sense of duty. Accidents can happen and very often do – not surprising given the amount of rum that has been consumed.

One unique feature of the Hawick event is the experience of the “Hut”, a large cricket pavilion in St Leonards on the outskirts of town that houses some of the rowdiest piss-ups you may ever experience between 8am and 11am. After patrolling the town’s boundaries, the Cornet and riders arrive here around 8.30am to a rapturous reception. They then settle down for a traditional breakfast snack of “Curds and Cream”, yet more rum and milk, accompanied by rowdy songs and alcohol-soaked male bonding before attempting to head off to the racecourse a couple of hours later. Inside, the Hut is filled with long trestle tables and only one type of order is taken at the bar – a “crate”, which contains a case of McEwans lager, a large bottle of rum and two pints of milk. Groups of five or six usually split the cost, although some bravehearts have been known to order and consume a crate each. The Hut holds just under seven hundred people but, despite this, admission is ticket only and the tickets are like gold-dust. Good luck with getting one – it’s worth it.

The final destination of the riders is the local racetrack, a two-mile, half-hour walk north of town, where a series of horse races are held all day. The jockeys here are all professionals who forgo the temptations of alcohol, at least until the races are over. Meanwhile the other riders and “Foot Soldiers” – the name given to anyone who walks up from the town -– throng the colossal beer tents that are erected alongside the course. Indeed the focus is just as much on the action in the beer tents as on the track. The races finish around 5pm, after which the Foot Soldiers stagger back into town and the pubs again fill to overflowing. This is then followed by the crowning highlight of the weekend, the exclusive Common Ridings Ball, a black-tie affair held in the town hall on the Friday night. If you can't get a ticket, all is not lost – pubs again stay open until 3am and you can wait up for another real highlight of the night, when towards dawn you can experience the bizarre sight of torch-lit Scottish reeling performed on top of the twelfth-century fortified “motte” by people who haven’t stopped drinking for 24 hours and may not have slept in 48. If a testament were ever needed to the guts, glory and unbridled joie de vivre of the Scots, then this, surely, is it.