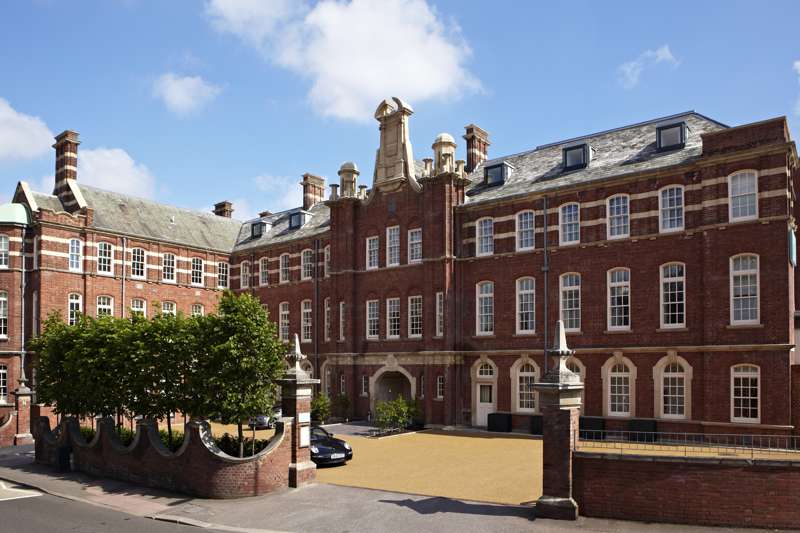 When Hotel Barcelona in the centre of Exeter closed, my husband Tom and I were a little sad. It had been the only really sassy place to hang out in the city, with a quirky, underground bar, an art-filled lounge and a light and airy restaurant. Although we live only an hour from the city, we even stayed there once on a particularly romantic, spur-of-the-moment, pre-children night.

It was with joy, then, that I heard the hotel was to re-open, this time as The Magdalen Chapter Hotel, under the new ownership of the Swire Group, and Tom and I left our daughter with the grandparents and went to stay over again. It’s lost the basement bar, but there’s a brighter, more sophisticated one with leather seating to replace it. They’ve got rid of the rather ugly car park too, so from the restaurant you only see a serene green space, and there's a huge lounge in which to hang out, all muted beiges, whites, reds and greys. There’s also a library with an open fire and perfect wireless reception, and they’ve commissioned artworks just as interesting as before.

The attractive, redbrick ninteenth-century building was formerly the West England Eye Infirmary, and is a vast place, with high ceilings, long corridors and stretches of original cool and colourful Italianate flooring. The hotel's designers have opted to retain the odd feature from the old days, like a sign detailing visiting hours, and a slightly unsettling 'drain' in the spacious Theatre Room. I met a guest who had been a patient at infirmary -– she was feeling a little disorientated, she said, but was looking forward to trying the spa.

We stayed in a Feature Room, the only one with a balcony – or rather two, placed either side of a huge white bed and with views over the city and its surrounding hills. Floors are wooden, furniture is a deep grey, walls are white, and the feel is comfortable and snappily modern, with your own Ipad for use during your stay. The bathroom edged towards being a little too functional for me (for a moment I thought I had strayed into the shower room of the Easy Hotel in Paddington where I sometimes stay in London), but a closer look revealed a stylish mirror, thick towels and generous-sized bottles of REN toiletries, which are made in Devon from natural ingredients – and which they also use in the spa.

Now, I'm  pretty fussy with my treatments, but the REN Moroccan Rose Ritual (£130), carried out by the capable Hannah Butland, was wonderful, incorporating a long de-stress massage with a scrub, followed by an oil massage and facial. It felt like it went on forever, in all the right ways, and the highlight was a facial massage technique which got into a very tight jaw. Tom had a very decent deep tissue massage too, so we both emerged bright eyed and happy. Opposite the spa in a separate walled garden there’s also a small, heated indoor-to-outdoor pool, which I took a quick dip in before my treatment. I was disappointed not to find a steam room, sauna or hot tub, and remain unconvinced by the ‘fire room’, which you enter to get into the indoor bit of the pool. There was a wood stove there, burning away nicely, and pretty lights in the ceiling, but the hydrotherapy jets had no punch at all, and the water was far too cold to sit in. Brrrr! Might they change this to a fully-functioning, tight-muscle-zapping hydrotherapy hot tub and make us all happy?

As for the food, the salt cod fritters with aioli we enjoyed with a glass of champagne were really very delicious indeed. Starters of halloumi and beetroot salad for me, and grilled quail for Tom, were tasty but nothing exceptional, while Tom’s main of fillet of brill with squid, chorizo, chick peas and aioli, he said, was ‘very very good’. However, while my roast duck breast was very tender, I was less excited by the slightly soggy cucumber salad with which it was served. We shared a perfect hot chocolate fondant with salted caramel ice cream for afters, and there’s a great little wine list, which (naturally) we could peruse on our Ipad. All good then, with just a few quibbles; and it's worth knowing the set menu here is exceptionally good value, at £15.95 for three courses during the week and between 6pm and 7pm at weekends.

For rates, contacts details and more on the Magdalen Chapter Hotel click here. Caroline Sylger Jones is our Devon correspondent and writes on spa breaks, retreats and and healthy holidays as Queen of Retreats.