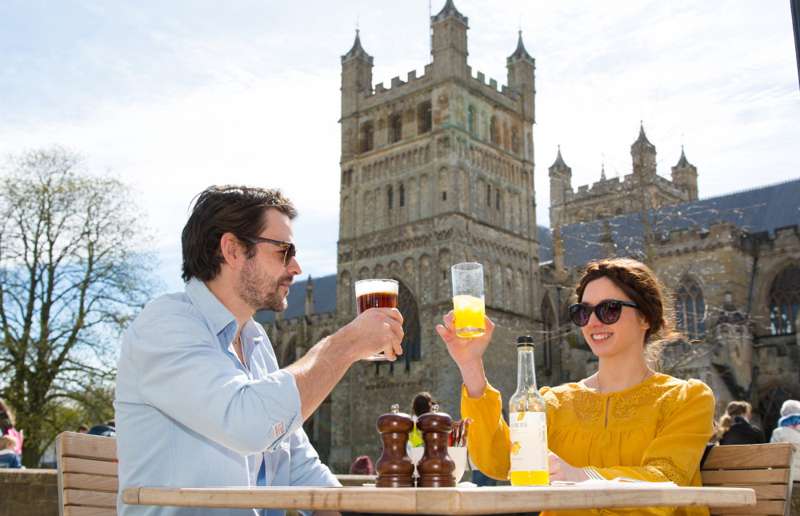 Within these Walls… Exeter for the weekend

There's something about walled cities that I love. Doing a circumnavigation of a city along a wall is a bit like feeling a present or sucking a cola cube – I enjoy getting a sense for a place by exploring its hard outer layer before diving into the delights in the middle. Thus I ended up on Honeymoon in Lucca – a Tuscan town with not one, but four walls – and high on my list of best British places are Derry and York.

Baffling, then, that after moving to Devon, it took me so long to explore Exeter – something I blame on utter ignorance. Like most people, I've always looked at Devon through cream tea–tinted sunglasses, crooning over fantastic fishing villages like Beer, solar-powered oases such as the South Hams peninsula and the adventure opportunities offered between the north shore surf beaches and the trails and tors on the moors.

I never gave Devon's urban places any thought, and as a result completely missed out on the cracking city that's right on my doorstep – one of the most vibrant, attractive, multilayered and historically fascinating cities in England. Shame on me. But I've been busy putting that right. The bigger loss is that so many people are missing out on a destination that offers so much as a weekend getaway, no matter how the weather is behaving.

Exeter's history long predates the Italian invasion, but it was with the arrival of the Romans that this prime spot on the Exe River estuary took off as a major dot on the map. And if you're wondering what the Romans ever did for us, there's plenty of evidence in Exeter, starting with those walls I should have wandered ages ago. An impressive 70 per cent of the 2000-year-old city wall remains intact, and walking along it is a great introduction to the old town. You can do the City Wall Trail at your own pace, starting in Castle Street and following the excellent instructions here (which include quiz questions and puzzles for children), or you can join a free, guided walk along the wall with a local expert. This is just one of 15 free walks that can be done with the knowledgeable Exeter Red Coats. Other themed ambles include Murder and Mayhem, Ghosts and Legends, Tudor Exeter, and Medieval Exeter – all of which reveal secret sides of this fascinating multifaceted city. Bear in mind that only one of these actually costs anything, the Canal and Boat Trip (£3.50), on which you'll explore the city's quayside and experience a boat trip along one of Britain's oldest artificial waterways – Exeter's Ship Canal, built in the 1560s. Another magnificent  free attraction that received the Museum of the Year award in 2012 is the Royal Albert Memorial Museum (RAMM) that boasts over one million diverse objects and specimens from around the globe.

For something completely different, delve into the city's underbelly with a tour along Exeter's Underground Passages. Built in the 14th century to help bring in fresh water, these underground passages are a monument to medieval ingenuity and engineering, and offer a unique and exciting way to explore Exeter from an entirely different perspective (perfect in bad weather). Back above ground, you don't have to be a history buff to appreciate the beauty of the gothic cathedral, which dates back to 1050, when the bishops relocated from Crediton because Exeter's walls offered them security from pirate attacks and violent Vikings. In the cathedral's ancient vaults, it's possible to see the Exeter Book, one of the most important documents in Anglo-Saxon literature, which contains poetry and even some saucy riddles.

The ruins of Rougemont Castle, also built shortly after the Norman Conquest of 1066, tell a darker but no less fascinating tale. A plaque here commemorates unfortunate Alice Molland, the last person in England to be executed for supposedly practising witchcraft, tried and hanged in Exeter in 1685. The castle was closed to the public for a thousand years, but has now reopened as a vibrant venue, a hub for events based around art, music, food and drink.

Speaking of grub – Exeter's rep as the Southwest's capital of gourmet cuisine has been blossoming in recent years, with new venues popping up offering everything from fine dining to funky food and quality coffee. Leading the charge, local lad turned double-Michelin-starred celebrity chef Michael Caine has long been getting gourmands salivating with his twin offering of casual grazing at the Café Bar & Grill and more fancy fare at his ABode hotel in the heart of the city.

If you like eating ingredients that have travelled a shorter distance than you to get here, have a nibble on something the gamekeeper brought in fresh this morning at the Rusty Bike, where all food and booze is sourced from within a few miles of the restaurant, or the Fat Pig, where it all began. Seafood munchers and fans of French cuisine should explore what's on offer at @Angelas.

For a taste of something seriously funky, mow into the Mexican menu at Mama Stones, run by the mother of soulful songstress Joss Stone, which segues into standing-room only live music venue after dark. Yet more cutting-edge live entertainment, from comedy and music to spokenword, can be enjoyed at the Exeter Phoenix, a cracking café/bar that also hosts art exhibitions and film festivals. Modern theatre performances excite audiences at the brilliant Bikeshed Theatre, and for more visual stimulation, check out the modern art at Spacex.

Exeter boasts plenty of pubs, with several scenic choices along the waterfront including the Mill on the Exe, the Turf (one of the few pubs in the UK that you have to walk or get a boat to) and the Double Locks. Other perennial favourites include the Well House, the basement of which features an original Roman well and a display of human bones, the Hour Glass and the ever-bustling Old Firehouse.

To work up an appetite or burn off a few calories from these Exeter excesses, dive into some of the outdoor and adventure opportunities the city offers. These range from the sedate, such as exploring the gardens at the nearby National Trust–owned Killerton House, through to getting harnessed up and testing your vertical limits at the Quay Climbing Centre, the biggest indoor climbing facility in the region. But to fully explore Exeter and get a real workout at the same time, I recommend bagging a bike or boat from Saddles and Paddles, where you can pedal along the water's edge all the way to the beach, or paddle to the pub along the canal.

Let's be honest. A weekend isn't going to be enough, is it? You might have to follow my lead and move here.