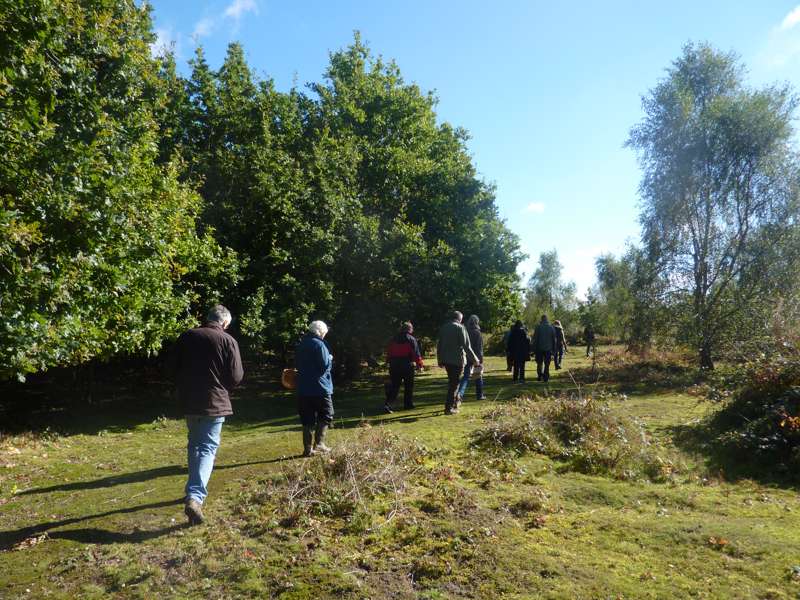 April may be the cruellest month, but October is the time for mushrooming, with moister air and heavier rainfall encouraging our fungal friends to pop their heads out of the damp soil. So it was that on a glorious sunny autumn morning, I found myself in Tunstall Forest drinking coffee and munching excellent homemade flapjacks with a bunch of sort of curious, sort of foodie folk like myself, who had joined Food Safari's latest mushrooming foray in Suffolk, not far from Aldeburgh.

Introductions made and flapjacks polished off, we met our wild food and mushroom guy, John. Now, like all mushroom virgins, there was a small part of me that was nervous about picking mushrooms and eating them, so I engaged John in conversation in the hope that it would be clear I had placed my life in a safe pair of hands. John had been foraging for mushrooms for 20 years, he told me, which was reassuring. He also said that he had always found mushrooming ‘exciting’, which was less so – 'exciting' made me think vaguely of the Russian Roulette sequence in the Deer Hunter.  But John was a confident sort of bloke, and, well, I was here now; what’s the worst that could happen? There are 3000 species of mushrooms in the UK, of which around 100–150 are good to eat; most of the rest are not nice rather than harmful, and only around 10 can be deadly.

We made our way through the forest, eyes firmly fixed on the ground; it takes a while for your vision to adjust to spotting anything on the leaf and lichen-strewn floor of the forest, but after a while you get used to it, and suddenly mushrooms seem to be popping up everywhere.  We found some toughshanks, whose firm stems make me realize just how well-named most mushrooms are – a thought reinforced by the next mushroom we find, the scary-sounding deathcap, an innocuous-looking but equally well-named variety that John puts his gloves on to pick – a quarter of its cap alone could kill you stone dead. More enticingly we find wood mushrooms, with a whiff of almonds that (as we discover later) carries right through into cooking, wobbly jelly ears, also good to eat, and a good beginner’s mushroom in that they only grow on elder trees (though of course you have to be able to identify an elder!); then some clumps of parasol caps – not quite ready to eat, says John, though come back tomorrow and they may be, especially if we have some rain. Nearby we find a giant parasol cap, a foot across, which John claims is too far gone to be very tasty. A pity. A precise business, mushrooming – timing is vital, but, hey, if you don’t find anything, you can always come back the next day.

We were getting used to seeing some varieties that seem to spring up everywhere, like puffballs – perky little critters that we slice open to see if they are good to eat: clear-white and they’re worth throwing into your basket, anything less and you should throw them away, especially if they smell vaguely of poo, in which case they’re an earthball and you should definitely throw them away.

We forage for around three hours in total, and fill a basket full of shaggy and regular parasols, puffballs, wood mushrooms and lovely, tiny purple growths called amethyst deceivers, and take them back to Food Safari’s HQ for a debrief, which consists of John (together with Food Safari’s resident chef, Tim) giving us a bit of mushroom cookery tuition and cooking up what we’ve picked before we eat it. This is followed by lunch – not using our foraged items sadly, but delicious nonetheless, with lots of mushroomy treats, during which we all get to know each other a little better and, er, talk some more about mushrooms.

A great day – none better – and next time I'm in the woods I’ll have the chance to show off.