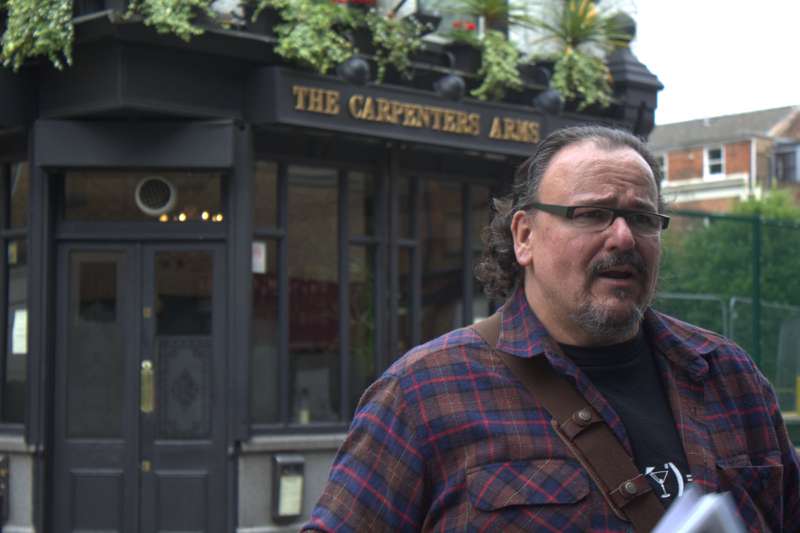 He may have been sporting long hair and a beard, but there was no mistaking Nick the Greek, from Lock, Stock and Two Smoking Barrels, encircled by nine keen pairs of eyes, outside the Blind Beggar pub on a dank Saturday in Whitechapel. 'If anyone calls me a poof, I'll kill him!' said the onscreen hard man (the softly-spoken actor Stephen Marcus), uttering Ronnie Kray's infamous line and bringing London's criminal underbelly to life on a new weekly ‘Gangster London’ tour through the East End. In fact, calling Ronnie a 'fat poof' was the last mistake rival George Cornell made: it was in this pub that Ronnie shot him, and the bullet is still lodged behind the mirror.

The stomping ground of the infamous Kray twins in the 1960s, the desolate high rises, low-lit shops and pubs and graffiti-covered walls of London's East End, also made the perfect gangster film set for Lock, Stock and Two Smoking Barrels (1998). We paused at key Kray sites: the hospital where the babes stayed with diptheria, the small semi they shared with beloved mum Violet and wardrobe-dealer dad Charlie, and the church where people climbed trees to catch a glimpse of Ronnie's funeral cortege. As we stood outside the infamous Repton Boxing Club, where the twins learned to fight – and which was the scene of an infamous card game in Lock, Stock…  Stephen pointed out the public washhouse whose furnace may have disposed of the remains of Jack 'the hat' McVitie  –  a wailing police siren lent authenticity.

As we stood beside broken glass in Graffiti Alley, where Bacon and Eddie are pursued by the police in Lock, Stock's opening scene, Stephen regaled the group - three couples and three lads from Kent - with tales of crime on and off set. After all, he had mingled with Lenny Maclean (aka Barry the Baptist), a real-life gangster said to be the 'hardest man in Britain', and bad boy Vinnie Jones' who legend has it so terrified a cameraman he had to change his underwear. Outside 'Samoan Joes' – in fact the Royal Oak pub in nearby Columbia Road – one of the group reminded us of Bacon's line: 'I asked you to give me a refreshing drink. I wasn't expecting a fucking rainforest!'

At the end of the tour we followed Stephen into a nearby pub. After all, it's not every day you get to clink glasses with a gangster, even a fictional one. Luckily though, for those who've seen the film, he didn't drop it through a non-existent table.

Gangster London Tours run every Saturday 1pm until August 25 £15 per person; private tours are available anytime. Brit Movie tours are the largest dedicated movie tour company in the UK, with location tours ranging from Harry Potter to Jane Austen and TV series like Dr Who and Gavin & Stacey.