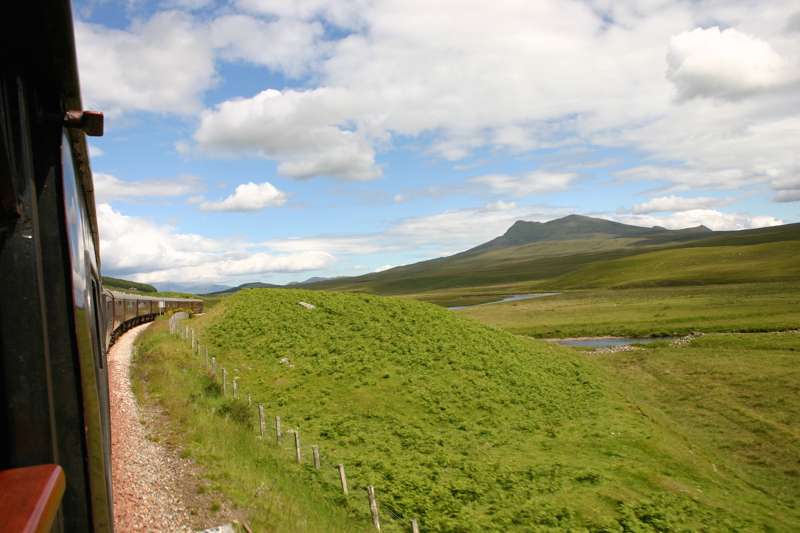 Ask people to name one of the world’s great railway journeys and they normally pipe up with the Orient Express, the Blue Train or the Trans-Siberian. But, hey, Scotland boasts railway journeys that are up there with anything else in the world, and we love the fact that national operator Scotrail have just packaged the six best together as ‘Great Scenic Railway Journeys of Scotland’. We thought we'd check them out – and the good news is we’ve recommended a great place to stay at each journey’s end.

This is the granddaddy of them all, and arguably the world’s finest railway journey - an iconic service that furrows north from Glasgow, along the banks of Loch Lomond and deep into the heart of the Highlands, with a spectacular approach to Fort William with Britain’s highest mountain, Ben Nevis, in the background. In Fort William, stay at the fabulous Huntingtower Lodge boutique B&B.

This dramatic route cuts all the way from Inverness on the North Sea in the east right across to Kyle of Lochalsh on the west coast. En route are epic mountains, shimmering lochs and herds of red deer. The last stretch skirting the banks of Loch Carron is almost unbearably scenic – as is journey’s end at Kyle, overlooking the Isle of Skye, where you can stay at the excellent Portree Youth Hostel.

This less heralded line cuts north from Inverness in search of the northernmost extremes of Scotland. After shaking off the only city in the Highlands its pushes on through the legendary ‘Flow Country’, a vast expanse of wetland and peat bog that is full of wildlife, especially birds, which can be viewed from the comfort of the railway carriage. There are twin termini in Wick and Thurso and you can rest easy just outside Wick at the magnificent Ackergill Tower.

This ‘Scottish’ railway journeys cheats a little by sneaking over the border into England on its journey from Scotland’s largest city, Glasgow, south to the historic English city of Carlisle. On the way there are views across to the Isle of Arran and swathes of rolling Ayrshire countryside, as well as the hills of the Southern Uplands. If you're stopping over in the Lake District, we recommend you stay at the sumptuous Brimstone Hotel.

It may have recently lost some of its ferry passengers (the connecting ferries no longer go from Stranraer itself), but that just leaves more space to enjoy the train ride south from Glasgow, cutting through Robbie Burns country and the rugged hills of the Southern Uplands, taking in epic sea views too, with the rock sentinel of Ailsa Craig blinking back in the distance. Dundream provides, er, a dreamy place to stay overlooking the sea.

Very much the new kid on the block, the Borders Line only re-opened in September 2015, decades after being closed during the infamous Beeching cuts and it now once again snakes its way south from Edinburgh deep into the Borders country so beloved of Scottish writer Sir Walter Scott. It curls through rolling hills and by gushing burns and rivers en route to Tweedbank, a station handy both for Galashiels and Melrose, where you can see the abbey and sleep over in a gypsy caravan at Roulotte Retreat.