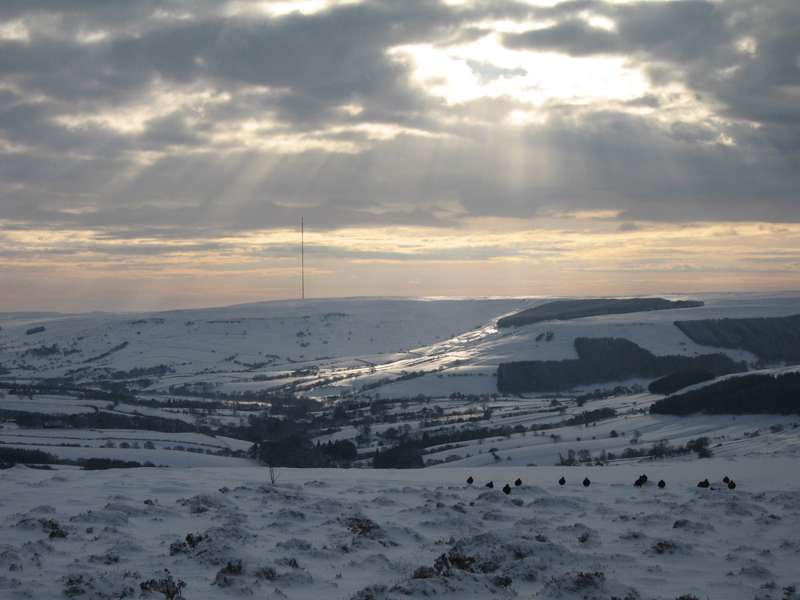 Believe it or not, New Year is one of the best times of the year to take a walk and see Britain at its best  weather permitting. It's the perfect way to blow the cobwebs away and feel normal again after a week or so of excess. To help provide inspiration, we've rounded up some of our favourite New Year walks all over the country.

A moody, marshy winter walk that feels wild and excitingly exposed in winter, and takes you through a north Kent nature reserve that forms a temporary home to thousands of winter waders and migratory birds.You can follow the path all the way to Faversham if you want, or turn back and settle in for lunch at the very desirable Sportsman pub (though you will need to have booked this well in advance).

You can do a wonderful 4 ½ mile walk from the South Downs village of Burpham, taking the path from the village hall (just behind the pub) and along the winding river Arun, past fields that are cultivated to attract wildlife then up on to the Downs for spectacular views of Arundel castle. You can't get lost: the route is mapped out on a poster at the entrance to the car park and is in any case well signposted. By the time you get back to the pub you should have a healthy appetite and the good thing about the George & Dragon is that it serves up rustic British cooking and local ales.

Oe of our favourite winter walks is to strike out across the fields from Horsey Windpump to the coast of northeast Norfolk, where December sees the arrival of hundreds of seal pups at the well-established colony on Horsey's wonderful sandy beach. The beach itself is roped off at this time of year, but after you can stroll the dunes and view pups and their parents in their thousands, and afterwards make your way back via the excellent Nelson Head pub to warm up with local Woodforde's ales and great homecooked food.

An all-time favourite New Year walk is this relatively straightforward 6-mile affair in the Peak District, which takes in some of the most unspoilt and overlooked parts of the stunning national park, and some of the most sensational views of the Peaks.  The best part? Ending up at the Red Lion pub afterward, with its roaring fires, local ales and excellent pub grub.

Arguably the best short walk in the Yorkshire Dales, following a 4.5 mile circular trail via the thundering Thornton Force waterfall as well as a host of other falls along the way. It's pretty accessible too, with a cafe and carpark,

There's no better place to start the New Year than on the magnificent Cleveland Way in North Yorkshire, most of which lies within the North York Moors National Park, and it's a pretty easy trail to take in bite-sized sections – Whitby to Robin Hood's Bay, for example (6 miles), or up to the majestic viewpoint of Roseberry Topping from near Great Ayton.

Our tip for escaping  the Cambridge New Year high jinks is to take the pleasant stroll up the River Cam out of the city towards the idyllic frosty meadows nearby and the charming village of Grantchester – previous residence of war poet Rupert Brooke and currently and famously home to none other than Tory grandee Jeffrey Archer. Grab a pint in one of the great local pubs and soak up the history.

This six-mile walk in Bath is one of the best town walks in the country, taking you high above Bath and delivering a mixture of townscape views and countryside, as well as passing by the remains of an Iron Age fort and an eighteenth-century castle.

You can do a lovely roughly nine-mile walk inland from Bigbury in south Devon, across the fields to the village of Kingston (where you can stop off at the excellent Dolphin Inn and then down to pick up the coastal path back to Bigbury. Try to time our arrival there with low tide so you can stroll across the sand to grab afternoon tea at the art deco Burgh Island Hotel.

Many reckon this route from Fowey in south Cornwall to be one of the best short walks in the country, and who are we to argue? It takes you high above the estuary above Fowey, and delivers magnificent views along its four-mile length. It also takes in an excellent pit stop in the Old Ferry Inn in Boddinick.

Easily accessed from the pretty Norman village of Newport in Pembrokeshire, Wales, it's worth a hike up the relatively modest heights of Carn Ingli for the magnificent views you get from the summit, which take in much of the coast of north Pembrokeshire and on a clear day all of Cardigan Bay as far north as the hills of Snowdonia.

It's a small loch by Scottish standards, around barely 5km long and only around 40m deep at its deepest point, but that's what makes  walk around this wee Scottish gem so appealing, with trails running all the way around its diminutive circumference.  Plus it's dead easy to get to as well, just north of Callender, and just a short drive from Stirling and Glasgow.