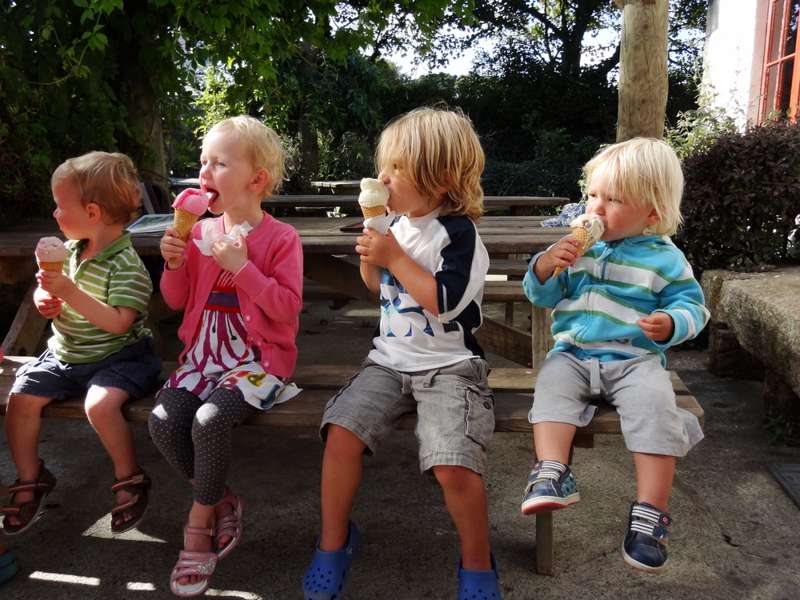 The Best Ice Cream Around

July is national ice cream month – well, in the US anyway – so we'd thought we'd do a quick rundown of our favourite places to eat ice cream, gelato – call it what you will – in England and Wales.

With its range of organic, award-winning flavours, Roskilly's makes some of the best ice cream you will ever get your tongue around in this part of the world. Visit Roskilly's farm and not only can you scoff ice cream to your heart's content (once you've decided which flavour/s you want), you can also meet the talented cows behind these famous creations.

A family-owned ice cream parlour that opened in Broadstairs in the 1930s and still boasts its retro, candy-pink decor – formica tables, dimpled leatherette booths, marble fountain, bucket chairs, the lot. The homemade gelato, made with milk rather than cream, is deliciously light and creamy.

St Agnes in the Isles of Scilly is worth a visit not only for its unspoilt beauty but also for an ice cream made from Troytown Farm’s herd of Jersey cows. Visit the farm to sample an array of flavours including ginger, rose geranium, banana bailey, coconut and chocolate, and stock up on farm produce including clotted cream and steak while you’re there.

Blackpool ice cream means Notarianni's, a classic Italian ice cream counter and parlour run by the same family since the 1930s. Thery still make old-fashioned vanilla ice cream – and only vanilla – to a secret recipe handed down from great-grandfather and founder Luigi Notarianni. Grab a cone, tub or a wafer to take away or indulge yourself with a full sit-down knickerbocker glory, banana split or their speciality sundae in the colours of the Italian flag

Not only does this local chain make great ice cream, but it tries to make out that ice cream is healthy, so we can feel good about eating it too. Their ice cream is tasty, comes in loads of weird and wonderful flavours, uses mostly locally sourced ingredients and is only 4–8% fat- as well as being preservative- and additive-free. In short, as close to artisanal Italian gelato as you can get and still be in southeast London.

This little Oxford chain of three cafés specialise in ice cream, with loads of good flavours, all made with fresh and natural ingredients. Their ice-cream cakes are unmissable – plenty of Oxford locals will go out for an Oxford meal then decamp to G&D’s for pud.

This is a wonderful old-fashioned ice-cream shop, with ice-cream in a wide array of flavours that includes white chocolate and honeycomb, raspberry pavlova and chilli red. They also sell traditional sweets – egg-and-bacon-flavour rock, for example – drinks, buckets and spades, and kitschy souvenirs. A seaside essential.

With the city's long history of Italian settlement, it’s not difficult to see why ice-cream is so popular and so very good in Cardiff. Poised above the water’s edge down in the Bay, Cadwaladers has made delicious home-spun ice cream since 1927, featuring all the classic flavours as well as many intriguing specialist creations.

Tiny Italian-run ice cream parlour, tucked away in a small arcade, since it serves up the best ice cream in Bournemouth – some say in the whole of Dorset. It's all home-made daily on the premises, and comes in many different flavours – some are more traditional, using local seasonal ingredients, others offer interesting combinations such as green tea, kiwi and banana or lime and coconut sorbet.

Ok, it's more of a beach café than a gelateria, but there's perhaps no better place in England to eat an ice cream, and they serve their own range of quirky Cornish ice creams here, topped with lashings of clotted cream.