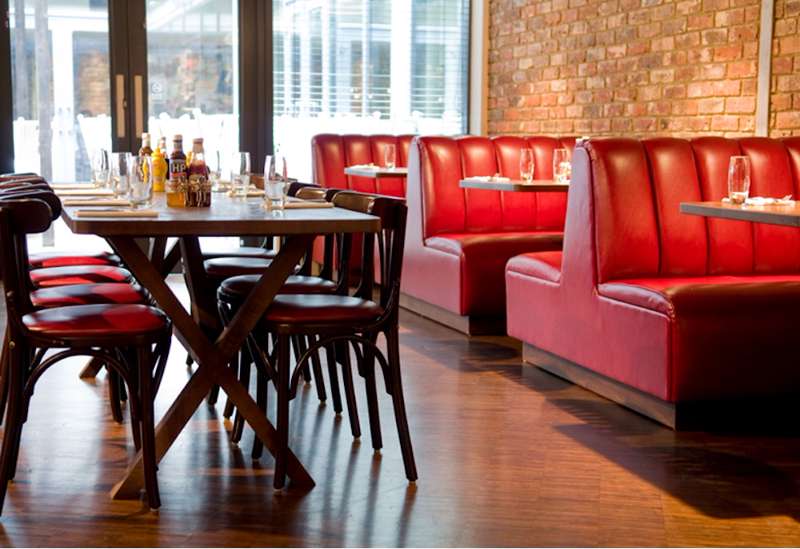 Hotel restaurant. Are there two words in the English language that when put together inspire such melancholy, if not dread, in the heart of the seasoned traveller. We’ve all been there, haven’t we? A soggy salad, an overcooked steak, perhaps a frozen dessert if you haven’t lost the will to eat . These are the things I imagine when I think of a restaurant located in a hotel.

But times are changing, indeed in London at least they changed some time ago. Gone are the lacklustre starters and mass-produced mains, and in their place we have the gourmet burger, sustainably sourced steak and Michelin-starred tasting menu. Just last week the Shangri-La in the Shard opened its fine dining restaurant, LÁNG; Alain Ducasse (whose restaurant at The Dorchester holds three Michelin stars) opened his latest offering, Rivea London, and Simon Rogan took on the art deco dining room at Claridge’s, previously the domain of Gordon Ramsay, reopening it as Fera. Yes, changes are afoot. But even before this latest bunch there were plenty of London hotel restaurants to get excited about. Here are my five favourites...

Heston Blumenthal’s first London restaurant has a unique concept – every dish on the menu is taken from a British recipe book of old. I couldn’t resist the famous meat fruit (a pate served to look like a Clementine) and then moved on to the powdered duck, served with umbles. Not being au fait with culinary terms, I asked the waiter what these were and instead of a cursory explanation was told the story of umble pie, made with inferior meats and giving rise to the expression “eating humble pie”. This meaty dish almost negated the need for dessert – but not quite, I'm happy to say. I finished up with tipsy cake and waddled out of there like a fat duck. Somewhere to celebrate – and maybe even learn a thing or two.

The Dining Room, The Goring

I’ve never had better service than at the Goring – where everybody seems to know your name. Here, in the calm, spacious dining room it’s all white walls and even whiter linens, and a hushed professionalism reigns supreme. But this is not the clinical service of some places:  every course comes with a proud smile and an extensive introduction; indeed we have never learned so much about cheese thanks to the garrulous cheese trolley guy. We sampled eggs drumkilbo, said to have been the Queen Mum’s favourite dish, and feasted on Scottish halibut and Cornish fish stew, all washed down with a bottle of French white I would never have chosen myself (thanks sommelier!). Somewhere to take someone you care about.

Steak is all too often disappointing. So if you're in the mood for meat best head somewhere bankable, like the Hoxton Grill where the chateaubriand is cooked to perfection and served with aplomb, not to mention crunchy, chunky chips and a tangy peppercorn sauce. Take a seat in one of the red leather booths here  and order a bottle of Malbec and the chateaubriand served rare. Start with a chunky Caesar salad and make sure you save some room for dessert – the raspberry sundae is unmissable. Somewhere to settle in for the night, before moving on to cocktails.

A basement in Shoreditch may not be where you would expect to find a high-class French restaurant – but the Boundary Restaurant is French right down to its décor,  and a wine list that is truly a thing to behold (and probably to ask for recommendations)I say try the Chablis, and order the lobster thermidor to accompany it. Then feast on starters (they recommend sharing three between two, and why not?) that range from steak tartare to foie gras. But save plenty of room for that lobster – there are few better in London. Somewhere to splurge.

Gordon Ramsay may have pulled out of Claridge’s but his restaurant at the Marriott Grosvenor Square is still going strong after 9 years, and there are no signs of a drop in quality. I can’t resist the king crab to start, served with braised octopus and brown crab puree. I then order the Scottish hand-dived scallops with crushed peas and finish with the lemon meringue pie, served over dry ice which spews out over your tabletop like a magic potion unleashed. Somewhere to bring a group of friends – and dazzle them with dessert-time magic.