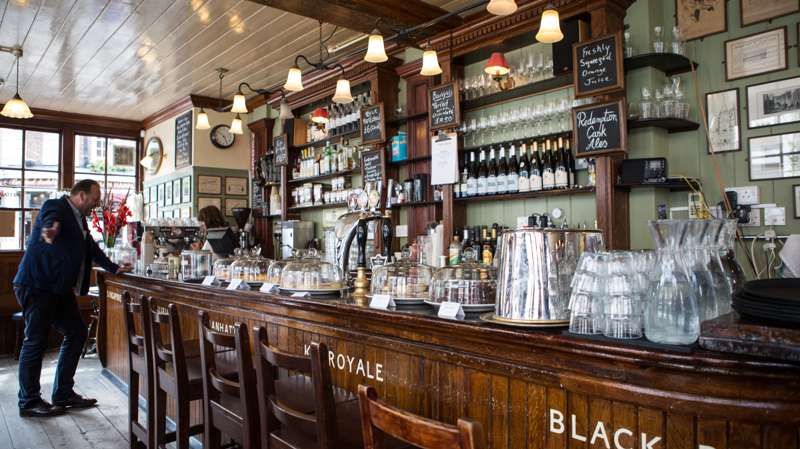 Spitalfields on a Plate

Foodie tourism is big business in these culinarily aware  times. Paris just ain’t Paris without a mouthful of ornate macarons. What would a Highlands holiday be without haggis, neeps and tatties? A ramble down La Ramblas without a sticky churro to chew on? The Barcelonés wouldn’t hear of it. But what of the cuisine of our own fair capital? As arguably Europe's most cosmopolitan city, it's hard to know where to start for  the millions of hungry tourists who visit the Big Smoke every year and want to find the true taste of London. Well, help is at hand courtesy of the newly founded Eating London Food Tour.

Converging at Old Spitalfields Market, with the Saturday morning bargain-hunters already swarming the stalls, I met up with a group of seven other eager foodies (all from across the pond) and our smiley Aussie guide, Nicole, to begin our East End gastronomic odyssey at St John Bread and Wine with, we’re audaciously promised, “the best bacon sandwich in London”. Opened in 2003, this sister restaurant to the original Clerkenwell branch is a local institution. Founder Fergus Henderson espouses a philosophy of ‘nose-to-tail eating’ where no part of the pig goes to waste (“everything but the oink”). I'm a bit sceptical if I'm honest (just how good can a bacon sandwich be?!), but even I have to admit that the St John sandwich delivers – sweet, ever-so-slightly crispy bacon, homemade brown sauce, and the freshly baked bread – enough said.

Spitalfields has had an eclectic past to say the least. One-time refuge of French Huguenots, Jews from Eastern Europe, Irish weavers, and of course, immigrants from south Asia, particularly Bangladesh. The demise of the wholesale fruit and veg market in 1991 paved the way for the latest crop of emigres, the hipsters – evidenced by the abundance of eye-catching street art that adorns the route to our next stop. Past the Ten Bells pub and the imposing Hawksmoor-designed Christ Church, we make our way down Brushfield Street to The English Restaurant – an atmospheric old dining room, parts of which date to the late 17th century. The wood panelling and pews were actually salvaged from Hawksmoor’s church, while the winding staircase was purloined from the Savoy Theatre. The banana bread and butter pudding with rum custard we get to eat here  is the perfect winter warmer. It’s rich but not sickly, and the booze gives it a welcome punch, offset nicely by the fragrant hint of vanilla.

Next stop is the artisan cheese shop Androuet, where master cheesemonger Alex (along with brother Leo) sell some of the finest cheeses this side of the Seine as well as some show-stopping English varieties, matured to perfection in the cellar beneath the shop. We sample the Waterloo (light and subtle), Cornish Yarg (nutty) and the Bishops Stilton with caramelised walnut – which we all agree is the resounding winner.

It’s noon now (aka: pub opening time) so what better way to celebrate than with a visit to proper East End boozer, the Pride of Spitalfields. We sample a thimble-full of the recently-revived Truman Brewery’s newest ale – a piquant example of the East End’s ability to reinvent itself. As we dodge the crowds and make our way up to Brick Lane’s northern end, the intense aroma of exotic spices yields to the comforting smell of freshly-baked bread, or more specifically bagels. As any bleary-eyed raver who has staggered down this way in the wee small hours can testify, the Brick Lane Beigel Bake is legendary. Run by the venerable Mr Sammy, it has been churning out these delicious doughy treats since 1977, 24 hours a day, 7 days a week. Coppers, cabbies, tramps and traders, Mr Sammy has seen them all in here. “They only come out at night… The good, the bad, and the ugly” as he calls them. As Nicole talks us through the history of the Jewish diaspora in the East End, we tuck into the famous salt-beef. With generous slatherings of tangy mustard and crunchy gherkins, there’s history writ large with every salty mouthful.

Our final stop takes us to swanky Pizza East. With cocktail bar Concrete downstairs and über trendy Shoreditch House next door, Pizza East is now one of Shoreditch’s hippest dining haunts. Once the famous Tea nightclub, the glitzy interior (all exposed brickwork and rococo lighting) is a fitting setting for our final dish – salted chocolate caramel tart, a deliciously indulgent dessert, served with an elegant quenelle of vanilla clotted cream, is quite literally the icing on the cake.

Now, this tour might not be to everyone's taste – indeed visitors from other parts of the UK might scoff at the novelty of having a pint in a pub. But let's face it, when did you last spend half a day walking around from place to place just focused on eating? And while it’s pretty high on calorific content (we also squeezed in a bite at Poppies Fish & Chips and a lamb pasanda at Aladin), the portions are manageable and the walking in between helps to shift some of the stodge. It's also a learning experience, and makes you appreciate the everyday for its history… did you know that the British national dish (fish and chips) was brought here by the Portuguese and Belgians respectively? Think about that next time you pop in to your humble local chippy? Now, time to get a salad…