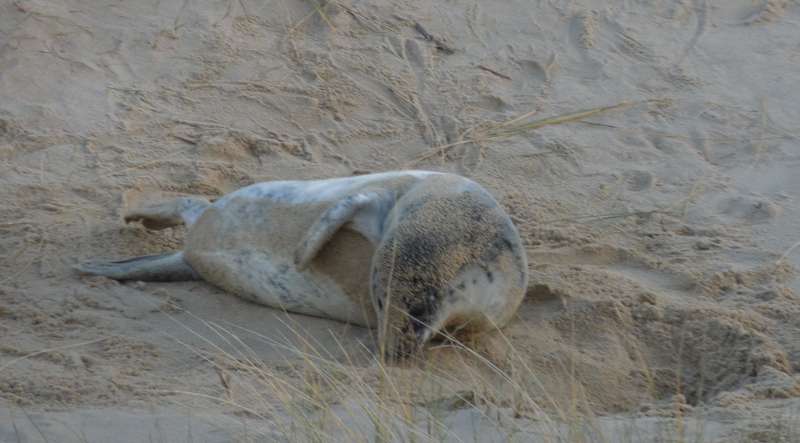 It's not long until Christmas, and every year at this time we we love to visit the seal colony at Horsey on the northeast coast of Norfolk. You can see seals at Horsey all year – as well as at Winterton a few miles south and most famously at the far end of Blakeney Point, to which there are regular seal-spotting trips by boat.  But they're perhaps most plentiful at Horsey, and the end of the year is a particularly special time to go, because it's then that they come ashore to give berth to literally hundreds of pups.

Believe it or not, the majority of the world's grey seals hail from the British Isles, and a considerable number of them call Norfolk home. The dunes and sandy beaches of the northeast coast make for a particularly rich habitat, and every year the colony here breeds in large numbers. The pups are pure white when they're born in November; by late December they're usually weaned and beginning to stand (well, flop) on their own, their coat becoming mottled and darker, and after a while completely waterproof like their parents, by which time they'll be ready for the sea. Immediately after, the cycle begins all over again, when the females mate and get pregnant, in time to deliver more pups at the same time next year.

The beach itself is roped off until the end of January, but you're guaranteed to see lots of seals (and lots of pups) from the path that cuts along the top of the dunes; indeed they are surprisingly unfazed by the presence of the crowds of camera-toting gawkers that sometimes show up on sunny weekends during the December holidays. But most of the time you'll have the place pretty much to yourself, and – seals aside – it's a glorious spot, the dunes giving a fine vantage point back across the marshes towards Horsey. You have a choice of two walks to get there: an easy one, parking up at the excellent Nelson Head pub and cutting across the fields for half an hour or so before returning for an excellent lunch; or leaving your car at Horsey Windpump, which is a longer walk and only offers a cup of tea and a slice of cake at the end. Both, however, deliver wonderful encounters with seals.

To learn more about the seals of Horsey, or to become a member of the organisation that helps to protect this special place, contact the Friends of Horsey Seals or go here to see them in action.