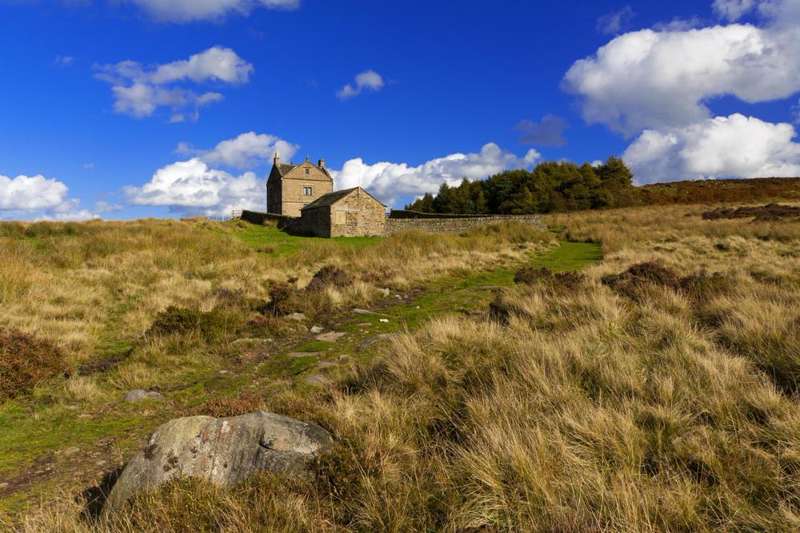 18 Best places to stay in the Peak District

The Peak District is the second-most-visited national park in the world after Mount Fuji, yet ask most people which part of Derbyshire is their favourite and you’ll often hear ‘I’ve never been’. This has the effect of making those who live there smile rather smugly; Derbyshire is, in effect, one of the country’s best-kept secrets. And that's what we love about the soaring heart of England – that and the fact that Derbyshire and the Peak District have some fabulous hotels, B&Bs and other places to stay. Here are some of our favourites...

In a criminally under-visited part of Derbyshire, John and Marion Fuller Sessions have restored Tom's Barn with style and fabulous attention to detail – raftered and beamed, with a quarry tiled floor covered in colourful rugs and pale walls made lively with modern art. Climb open-tread stairs to the galleried bedroom and seriously sexy bathroom complete with spa bath for two.

As perfect a place to enjoy this beautiful part of the Peak District from as you could wish for, in a building firmly rooted in the seventeenth century, but with decor that is a clever mixture of ancient antiques and modern touches, and an elegant restaurant and cosy bar downstairs that are a joy after a hard day's walking. Dogs are welcome – and in this part of the world,  great walks abound.

Max and Susan Fischer have been in residence at this stunning Grade II-listed Manor House since 1988, and their care and attention to detail shines through. Their restaurant is Michelin-star territory, and unsurprisingly the accommodation matches, with six traditional bedrooms in the main house and features that are bang up-to-date, despite the building's obvious history.

A handsome mid-eighteenth century hotel, bang in the middle of Hartington, given the kiss of life in 2010 and a rather grand place, with elegant proportions in both the bar and dining room and the bedrooms, all of which are different but all with lovely linen, top-notch textiles and spotless bathrooms. Eat in the relaxed bar or in Charlies, the slightly more formal restaurant.

After the huge success of their first luxury campsite in the Lakes, it comes to no surprise to us that the folk at Long Valley Yurts have also settled in the middle of the Peaks National Park, surrounded by a whopping 100 acres of rolling English farmland, with not a car, road or streetlight in sight. The yurts are wonderfully traditional, and not just generously spacious and airy, but also sturdy as you like.

No, not that River Cottage. But this one's just as lovely in its own way. Gilly and John Deacon have travelled and lived all over the globe, finally returning home to John's Derbyshire roots, and restoring this grand 18th-century house right by the river in pretty Ashford. Gilly's got a good eye for decor, and she's collected a great deal of interesting ephemera.

Your jaw will drop when you first catch sight of his stunning 16th-century manor house in sleepy, rural Alstonfield. The house has fine Georgian features and Regency additions, and an acre of walled gardens and lawns. Jo's sense of design is 'country house meets classy vintage' so whilst the charming B&B rooms have a neutral palette, there's always an interesting something-or-other to take your eye.

There's nothing quite as relaxing as taking a trip on a canal boat. You can of course rent your own if you want a full-blown canal boat holiday. But if you don't want that level of commitment, Ruth and Mark at Wandering Duck will take you out on anything from a whole day tour to a 3-day trip from their Derbyshire base, exploring the canal network between the Peak District, Cheshire and Manchester.

Housed in a newly renovated Victorian mansion, this is more country house hotel than budget hostel in feel. Sure, it's cheap, and has spacious dormitories with shared bathrooms as well as private rooms with en-suite facilities. But its location, in the heart of the rolling hills of the Peak District National Park, the beautiful gardens and its stately interiors pack more of a wow factor than many a five-star hotel..

Beechenhill Farm ticks a lot of boxes. High on a hill above the picturesque Peak District village of Ilam, it's first and foremost a working organic dairy farm, but one which has recently won an award for sustainable tourism. Artist Sue Prince and her family have turned Beechenhill into a glorious, eco-friendly retreat, home to one of the most bucolic and peaceful B&Bs you could imagine, plus two lovely self-catering cottages for two in the grounds.

Sarah Copley's Tinkersley Cottage was one of our favourite Derbyshire B&Bs, and the Manor House is its successor, just outside Matlock on the edge of the Peak District, picking up where Sarah left off, with two beautiful bedrooms, both with en-suite bathrooms, in this grade II-listed grey stone Georgian Manor house in the centre of Brassington.

Gilly and Simon Groom (yes, him off the telly!) took the reins from Simon’s mum some years ago and run this wonderfully historic 16th-century farmhouse B&B with so much such care it seeps out of the metre-thick walls. Nestled in a cluster of ancient buildings, which includes a lovely church, and with fabulously long-reaching views, Manor Farm is the place to go if you want to be completely spoilt.

Max and Susan Fischer have been making people happy for decades at the renowned Fischer's Baslow Hall. Now they've spread their skill set to this lovely one-bedroomed 'cottage' in nearby Barlow. Some cottage. It looks pretty standard from the outside but step into a jaw-dropping open plan ground floor, the double-height living-space revealing the original cruck barn structure. The extraordinarily comfortable queen size bed sits loftily on the mezzanine floor and the sleek, grey slate floored kitchen has every gadget you could possibly need.

This used to be a pub but this is no bland, corporate make-over – indeed Julie and Steven will give you a proper Derbyshire welcome and a terrific breakfast, as well as the choice of three fabulous bedrooms, all with top quality linen and sumptuous textiles and one or two quirky additions collected by Julie.

This corner of north Derbyshire can be overlooked, and that’s a shame because you’d be missing a trick, especially if you didn't stop by Paula Greenglasses’s three old stone cottages,. The silence is golden, and Paula’s design eye is keen, so you'll find a winning mix of contemporary and vintage throughout. Bedrooms are immaculate and cosy – there’s an antique brass bed in one, an oak sleigh bed in another – and all have top-notch linen and spotless bathrooms.

This Derbyshire longhouse dates from 1873 – it's a former barn and cottage built by George Eyre, who knew a thing or two about location. Not only that: your hosts Phillip and Vivienne have won so many gongs they'd blush if we listed them. Suffice it to say you'll be right and royally looked after. Vivienne's breakfast will set you up for a day's yomping on the peaks.

This delightful Grade II-listed 17th-century two-bedroom cottage has been stylishly refurbished by the Duchess of Devonshire, and as you'd expect from a property on the Chatsworth estate, it has a top-quality finish, with everything you need in a spanking-new kitchen, and a charming sitting room with an inglenook fireplace and wood-burning stove. Set on the edge of neighbouring village Baslow, the cottage also has private access to the Chatsworth Park and its own private walled garden; you're free to walk at any time through the 1100 acres of the stunning park. Embrace your inner Duchess!

You want remote? Well, actually this place is not that far from civilisation but it certainly feels like it. The National Trust own the Longshaw Estate, and this former gamekeeper's cottage has been refurbished with every comfort in mind. It might look like something from The League of Gentlemen from the outside, but step inside and there's a huge vaulted kitchen complete with an Aga, a cosy sitting room with squishy sofas and a wood-burning stove and three lovely bedrooms.