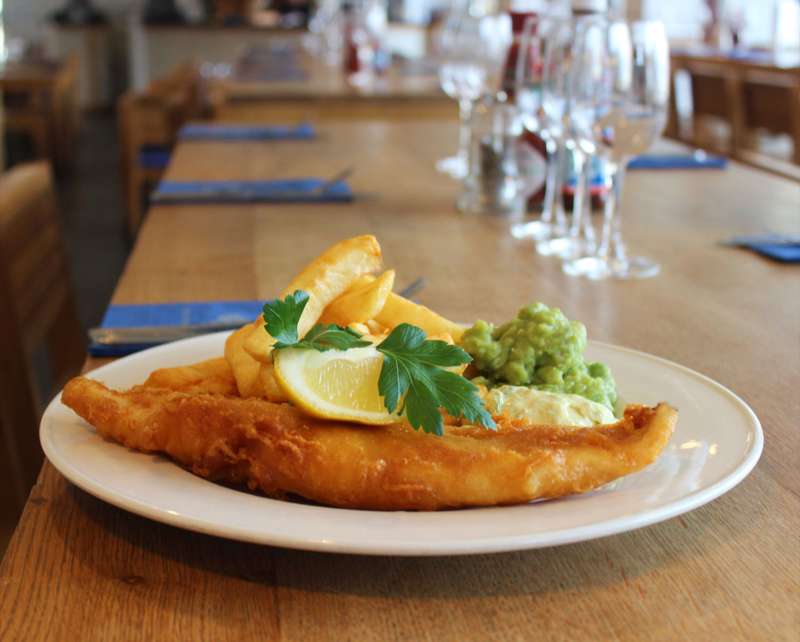 Last month the annual National Fish and Chip Awards awarded the crown of 'Britain's best fish and chip shop' to the excellent Quayside in Whitby, and we're sure it's a worthy winner. But let's face it, fish and chips is a subjective (if serious) business, and is sometimes about a bit more than just the freshness of the fish and quality of the cooking. What about location, service, a friendly face? Or even price? We've done a round-up of a few of our own favourites, but also wondered what you would choose. The hunt for Britain's Best Chippie is on!

No ordinary chippie. but award-winning even when it only opened on Tuesday and Thursday nights. Now you can tuck in five nights a week – to fish caught by Adam and his mates – either as a takeaway or in the contemporary restaurant they've built near the beach. Almost worth the helicopter ride to Scillies alone.

A true favourite in Falmouth, this proper fish shop focuses on superb battered fish and tremendous, crispy, hand-cut chips, mushy peas and all the trimmings. It also offers a mouth-watering selection of Rick Stein's favourite fish dishes.  Hard not to like, especially given the pleasant surroundings of the sit-down restaurant and prices that aren't through the roof.

Lovely old-fashioned fish restaurant with spotless indoor seating and a selection of both traditional and more exotic fare straight off the boats in the harbour.

The fish and chips at this Dunwich chip pie is pretty good, but its location, almost bang on sleepy Dunwich's shingly beach is brilliant, and they have plenty of indoor and outdoor seating. A great stopover if you're walking the coastal path.

Beaten into second place this year in the national awards, and Frankie's is always there or thereabouts when you're talking about the UK's best chip pies. Deservedly so: alongside fabulous haddock they also do monkfish, hake and even scallops, deep-fried with chips.

You can't come to Blackpool and not have fish and chips, and thankfully among many mediocre choices Yorkshire Fisheries stands out. It does takeaway or sit-down, and has halibut and other such exotica alongside the usual cod and haddock. Most amazing, though, is the fact that these Yorkshire folk have even forced the Lancashire folk of Blackpool to admit their fish and chips is the best.

In a town stacked flu of fish and chip shops, the Palace Pier's Palm Court still reigns supreme, serving crisp and golden fish and chips in an elegant dining room. There's nothing quite like eating fish and chips on the pier, and if you have anything leftover you can always throw it to the seagulls.

The Quayside's rival in fishy Whitby is this old-established fish and chip restaurant, from where you can stare out of the window at the boats that might have landed the fish on your plate.  Crispy cod and haddock in three sizes, plus lots of lesser-known varieties, and not just pollock (gurnard anyone?), and if the food doesn't convince you, the queues outside will.

Proper chunky chips and the freshest fish in ultra-light batter at this Braunton stalwart, close enough to the beaches of North Devon coast to pop in for a takeaway to eat on the beach – though it has a nice next door restaurant, too.

Alway a queue at this popular old perennial in swanky Aldeburgh, and if you want to sit down they have a proper restaurant just down the street – though beware of the queues here too. Worth the wait, whichever you choose.

Nestled behind the Gate Cinema in trendy Notting Hill, this is probably the poshest fish and chip shop you are ever likely to find. A simple cod and chips is likely to set you back the best part of £13 but you could always push the trawler out and celebrate with a lobster spaghetti washed down with a £65 bottle of champagne. Lunchtimes are more modest where you get three courses including shellfish soup and a sticky toffee number for £12.95.

Can you do Batter?