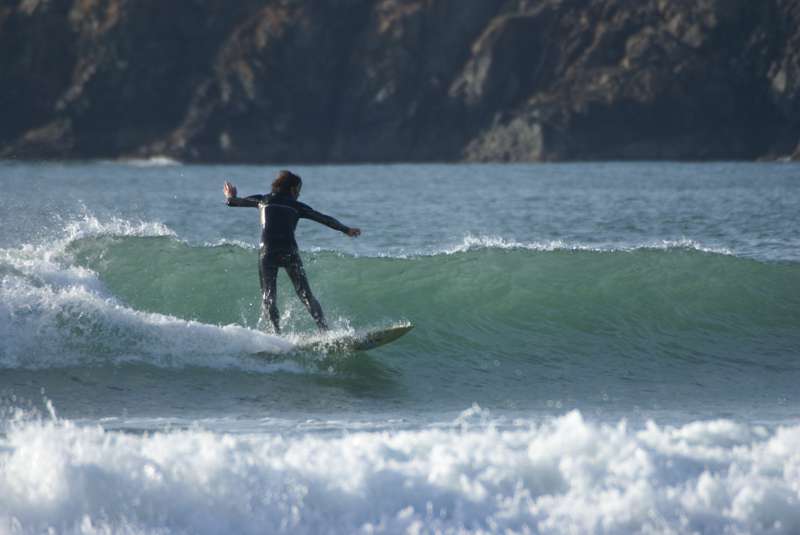 I know for sure that summer has finally arrived when the surfing becomes more congested, and I'm surfing classic little summertime waves amongst hordes of holidaymakers  enjoying their annual two weeks of being a surf dude. And getting in my way…

One can forgive them their trespasses for on the whole they know not what they do (as the regular wipeouts proved), and in any case who would seriously deny anyone the pure, simple pleasure of riding a wave, whatever their level of ability? Also, for those of us fortunate enough to live on the coast, whether you’re in Pembrokeshire, Cornwall or Scotland the chances are you’ll know where to find a nice quiet spot to surf when the popular beaches are a heaving mass of humanity both in and out of the water.

The best ‘secret spots’ hereabouts are... c’mon, you didn’t really expect me to give it all away, surely?! However, I will say that anyone with any sense who is looking for a wave will head to Freshwater West in South Pembrokeshire. This is probably the most consistent surf beach in Wales and always seems to have waves a foot or two bigger than anywhere else – on a good swell it can be comparable with a French beach break. It’s not the kind of place to paddle out in bigger waves if you’re a beginner, although small summer swells are generally pretty safe and in recent years they have employed lifeguards at 'Fresh West' to keep us all safe from harm.

To be honest this has tamed slightly what was once a pretty wild spot. But there are plenty of other beaches in Pembrokeshire that still remain free of anything other than waves, sand and seagulls. Marloes, across the Milford Haven Waterway is one such place, where the surf is very rarely busy – though it is famous in a way, having been used as a backdrop in the recent movie ‘Snow White and the Huntsman' (as was Fresh West in Russell Crowe's ‘Robin Hood’ a couple of years back). And before long we'll be able to head north into Ceredigion for our surf fix – once the big autumn swells begin to roll ashore onward there’s an array of classy point breaks from Cardigan north that any discerning wave rider will love. Until recently these breaks were relatively unknown, but the surf mags, internet and fools like me writing about them have opened up the waves of Cardigan Bay to the outside world,  so that it’s a rare day indeed that you can surf them alone.

But hey, when all’s said and done, no one ‘owns’ the waves, and with the right attitude and a friendly smile we should all be able to enjoy the surf – whether it’s the tiddly little waves of Whitesands in summer or the booming autumn swells that will soon be rolling our way to prove that, for a surfer at least, this is the best season of the year.