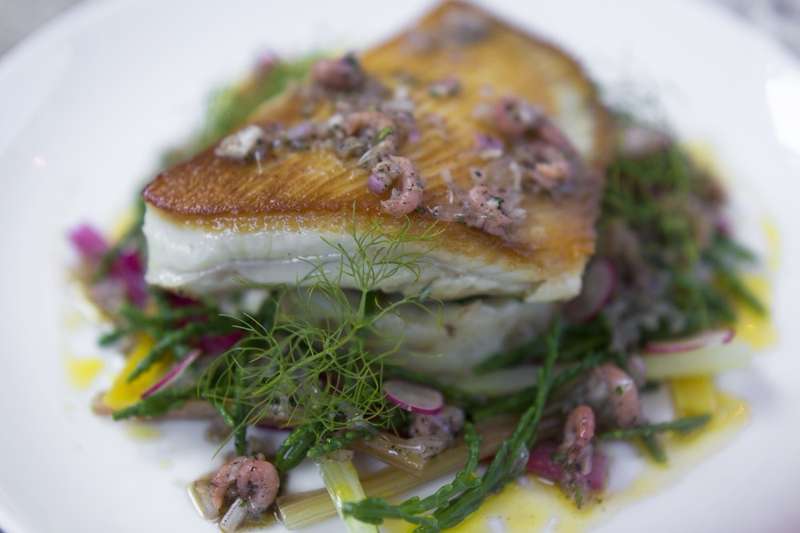 It's that time of year again, when the top 50 gastropubs in the UK are announced. Who will be knocked off the list, how many new entries will there be, will there be any re-entries? Voted for by top foodies and industry experts, the list celebrates the very best gastropubs and pub food in Great Britain; you'll find yourself champing at the bit to visit them all. At Cool Places we list no less than 12 of the gastropubs that made the cut this year - read on to find out why. What's more, some of them have rooms, so you can make a proper weekend of it.

See the full list at Top 50 Gastropubs or browse our own list of Pubs with Rooms and Pubs and Inns to find the perfect venue for a foodie weekend away.

Here is most certainly a foodie place, a Cornish pub in a middle-of-nowhere spot, worth the journey for the innovative seasonal plates of food prepared by chef Max Wilson. Using local ingredients (seafood caught by a local fisherman, greenery from small growers), the daily-changing menu features dishes like whole spiced john dory with tarragon, fennel and red cabbage slaw, and lamb breast with merguez sausage, cucumber, yoghurt and chickpeas. The added bonus? They have rooms where you can lay your head for the night, ultra comfy ones at that.

What can you expect from The Pointer? This is an award-winning village pub owned by a local Buckinghamshire farmer, with a stylish restaurant and four rustic yet contemporary guest rooms. The short menu focuses on their farm produce (Pointer Farm pork terrine, slow roast suckling pig, grilled Longhorn rib-eye); but fear not non-meat-eaters, you're well catered for too, with dishes like whole grilled Torbay sole, and wild mushroom risotto.

The Pipe and Glass Inn

With a Michelin-star under its belt since 2010, this East Yorkshire pub dishes up clever takes on traditional favourites alongside more extravagant offerings. You can expect the likes of 'James Whites' pork sausages with bubble and squeak, 'Two Chefs' ale and sage and onion gravy, and slow cooked crispy shoulder of lamb with mutton and kidney faggot and lamb belly boulangere. You won't want to leave, in which case you can bunker down for the night in one of their boutique suites.

What you have here is a three-time winner of the Top 50 Gastropubs award, yet it's an unassuming-looking pub in Kent's Seasalter. Owner-chef Stephen Harris left the Square Mile of London to open his “grotty boozer by the sea”. Boy, we bet he's glad he did. The Michelin-starred pub uses locally sourced ingredients all prepared by a self-taught chef, and features dishes such as roast gurnard fillet with bouillabaisse sauce and green olive tapenade, and apple soufflé with salted caramel ice cream. The wait for a table is well worth it.

If you're after a proper country pub with fab food, look no further than Yorkshire's the Star Inn. The thatched roof and cottage-like exterior of this Michelin-starred inn draw you in, once inside you'll be sold by the cosiness of the place, and will be booking to stay the night in one of their unique rooms across the road. The menu is seasonally focused -  how does prosciutto-wrapped pork tenderloin with spiced plum ‘Cigar’ sound, or black treacle saddle of roe deer with a deep-fried game bonbon?

Sitting pretty in the Welsh Borders just one place in the list from sister gastropub the Gurnard's Head, the renowned Felin Fach Griffin is a relaxed place with a fine selection of local ales, and high-quality, delicious food (don't forget they also have seven characterful rooms). Who can resist the likes of sirloin of Welsh beef with oxtail, watercress and bone marrow, or duck breast with chicory, duck fat mash, orange and anise? The owners must be doing something right.

This two Michelin-starred pub with rooms set in the lovely town of Marlow is warm and inviting with a laid-back vibe. You can't help but love celebrity chef owner Tom Kerridge, and with dishes like West Country pasty with turnip, swede and English mustard purée, and loin of Cotswold venison with date purèe, stilton, game and bacon pie on the menu, you'll feel the same way about his food.

Leafy Highgate village is home to the Red Lion and Sun, a North London gastropub serving up what it calls "rustic modern British pub food". Choose a glass of vino from the impressive wine list, and feast on dishes like smoked mackerel and beetroot salad with watercress and horseradish dressing, or chargrilled sirloin steak with hand-cut chips and béarnaise sauce. You'll leave well-fed and watered.

Emily Watkins is owner-chef of the Kingham Plough in Oxfordshire, a child-friendly and dog-friendly pub with rooms. Her seasonal menu celebrates native ingredients and changes constantly - you can enjoy the likes of hanger steak with bone marrow and parsley butter and sourdough battered grelot onion, and comice pear soufflé with sticky gingerbread. This is modern British cooking at its best.

Who doesn't want to try one of Heston Blumenthal's creations? You can do just that at his Michelin-starred gastropub in Bray. The team offers up reimaginations of classic British dishes, so you can expect roast chicken (with leeks, smoked almonds and spiced celeriac purée), and rhubarb trifle (with green tea, saffron custard and hazelnut praline). If the wait-list for the Fat Duck is just too long, this is the place for you.

Norfolk's Gunton Arms sits in a thousand-acre deer park, it's a traditional cosy pub where you'll feel right at home. Owned by an art dealer, the pub with rooms boasts works by Tracey Emin, Damien Hirst and Lucian Freud. But it's the food that plays centre stage, with venison from the deerpark and beef from the local herd at Blickling (both cooked over an impressive open fire), not to mention Cromer crab caught by local fishermen. Who can resist Gunton venison sausages with mash and onion gravy, or crab pasta with chilli and coriander?

What is a flitch of bacon you might be wondering? It's half a pig, and the prize presented to the winner of Essex's Dunmow Flitch Trials. Named after this prize, The Flitch of Bacon is a sixteenth century pub with rooms in Little Dunmow (owned by Daniel Clifford, of two Michelin-starred Midsummer House fame), serving up artfully presented plates of food using classical techniques - think artichokes, Cornish yarg, hazelnuts and dandelion, or cod, salsify, curry and pine nut. Just don't come here expecting a typical pub lunch (or to see any bacon on the menu for that matter).