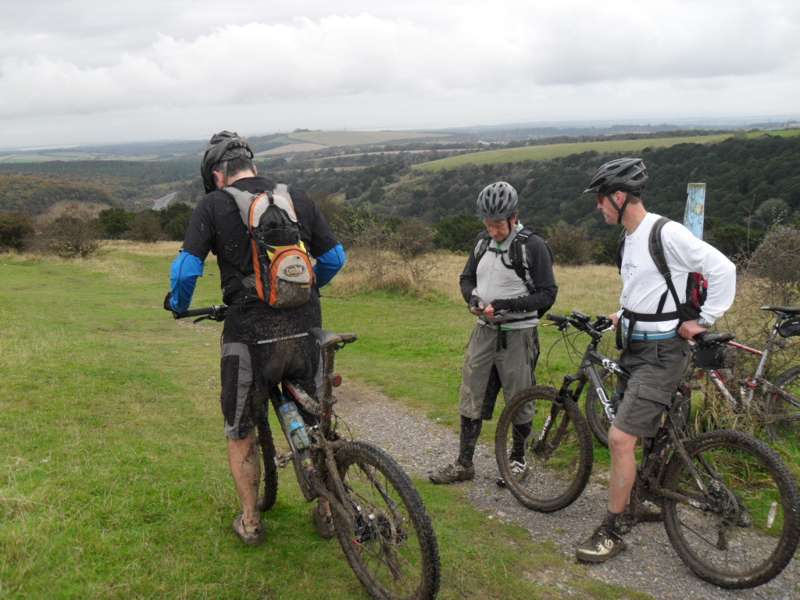 The plan was to cycle most of the South Downs Way in a weekend: a mere 68 miles or so across England’s newest national park, from Winchester to the Devil’s Dyke, just north of Brighton. Armed with minimalist backpacks, energy sweets, carefully prepared mountain bikes and the excellent Harvey South Downs Way National Trail map, on paper it looked a modest enough ride.

The four of us – friends from school days – met under the suitably inspiring statue of King Alfred in Winchester and seek the first signpost for what proved to be a fantastically well-signed route.  Actually it's not the nicest of starts.  Crossing the M3, cyclists are initially ushered onto a nettle-clogged path alongside a dual carriageway, but things quickly improve as we wend into the countryside above the INTECH science centre ­ – although we are alarmed to discover that we have to pass a large group of elderly trekkers twice, their progress somehow faster than ours (admittedly sections of the walking route are more direct than the cycle path).

Our speed picks up once we pass Beacon Hill, with its fine views, and there's an invigoratingly fast descent into the Meon Valley and on through the pretty villages of Exton and Meonstoke. Past here things take a dramatic turn for the worse. After a particularly wet week, and record-breaking rainfall all year, we find sections of path are a foot deep in cloying, wet mud. Cycling is impossible§e,s so we have to push while the mud clogs up the wheels, breaks and gears. Each time we stop to try and clear the mud off, we find there’s another muddy section just round the corner.  It’s an energy-sapping climb to the top of Old Winchester Hill, although the views from this Iron Age Fort are superb. Then, as we descend again, our way is halted by an unnervingly close shooting party which fortunately pauses to let us pass, allowing us to avoid the fate of the local pheasant population. The simple fisherman’s café at Whitewood Lake provides us with a quick lunch and the chance to take stock: our Gamin records we are averaging around 5mph. It's going to be a tough weekend.

Mercifully the muddiness improves as we head on, straining over Salt Hill and the even higher Butser Hill before we hit a dizzy 30mph gunning down a grassy slope to Queen Elizabeth Country Park. You get a good geography lesson on this route – the grim cloying clay round Winchester thankfully turns to chalk and flint as we head east, and we make good time to arrive at our overnight stop, the village of Cocking. Once the inevitable jokes about its name have been exhausted, we hose our bikes down outside the welcoming Moonlight Cottage B&B before a much needed recuperational meal and beer at the fine Bluebell gastro pub up the road.

The 38 miles we clocked up on our first day were at least accompanied by decent weather, through countryside where the trees were just beginning to change colour. This was the scenery that inspired Keats to write his famous Ode to Autumn, a time of “mellow fruitfulness”. The next day was more John Donne – “The sun is spent… The world’s whole sap is sunk”  – as we set off under a cloak of mist, passing fields full of more pheasants than I thought possible, up through the Charlton Forest where the trees stand draped in a stygian gloom. The ground is saturated, but standing water and mud at least sit on a chalk base, and our progress is steadier. We wend our way to the village of Houghton and stop for coffee and cake overlooking the river Arun, with the sound of steam engines hooting from the local Industrial Museum.

The hills keep on coming, and when the mist lifts we are met by stunning views across green, rolling countryside, where deer bound across open fields. After a death-defying crossing of the A24 and a mud-heap of a field by a pig farm, we descend to the River Adur north of Shoreham and up Beeding Hill (a well named ascent, much like the approaching Fulking Hill), reinvigorated by a sign that tells us our final destination is just over four miles away. Despite the arrival of a steady drizzle and the lowering of the clouds, we are struck by the stunning scenery as we approach the dramatic contours of the Devil’s Dyke, with its very welcome pub right at the top. We’d made it, sore-legged but intact.

We had cycled along tracks of gravel, chalk and flint – not to mention mud – as well as narrow country lanes, across fields and grass, up countless hills and through woodland and heathland, somehow avoiding any bike breakdowns or punctures (the fate of several other cyclists we’d met on the way). It was a fabulous ride and I would recommend it to anyone – in spring or summer.