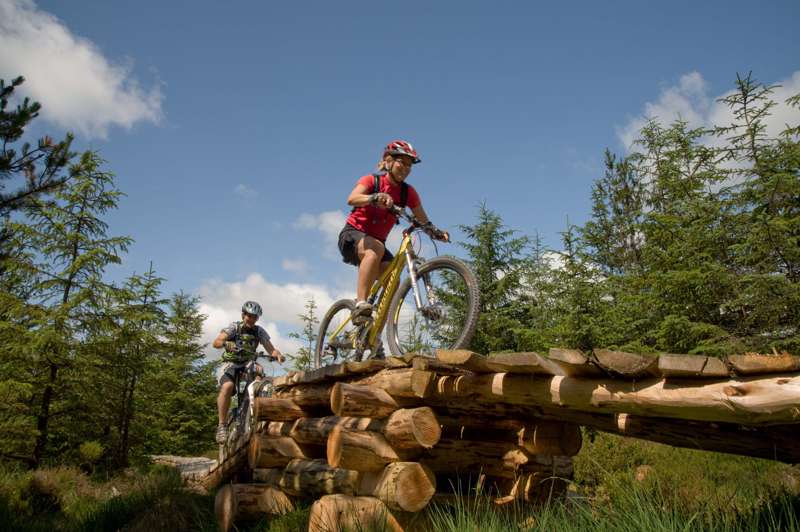 A Day Out in the Forest of Bowland

Through the undergrowth they went, squealing and running as fast as their little legs could take them.  Their mother looked up, with tiny, suspicious eyes then put her head down and carried on munching … I had inadvertently disturbed a litter of wild boar piglets and they had dashed for cover further up the field.  Fortunately I was separated from their mother by a fence, as I suspect she knew.  Such are the delights of the Bowland Wild Boar Park, one of the many attractions of the Forest of Bowland, which is perhaps England's loveliest and most undiscovered Area of Outstanding Natural Beauty.

It's larger than you might think – 300 square miles in all, stretching from the infamous Pendle Hill (scene of the Lancashire Witches’ cavortings) up to north of Lancaster and into Yorkshire near Settle, and for those who enjoy simple rural pleasures it's an absolute delight. There are plenty of places for fishing in the four main rivers, the Lune, Ribble, Hodder and Wyre – mainly game fishing including salmon, sea and brown trout and grayling – and birdwatchers are drawn by the lure of one of Britain’s rarest birds, the Hen Harrier, as well as the peregrine, merlin, stonechat and numerous others. I love the summer sound of the skylark as it swoops and swirls high above the flower-bedecked hay meadows and hills.

A day exploring this region just isn’t long enough – I’ve been often and discover new places every time.  It’s a tranquil land of undulating hills, isolated moorland, dense forest, quaint stone villages and a myriad of rivers and streams.  I had driven down from Carnforth through the Trough of Bowland, getting lost along the way as usual.  (Do NOT rely on SatNav to get around this area – signals are not always strong and it’s a cobweb of little lanes.)  The Trough is popular with fell walkers and there are lots of paths winding their way across the hills and valleys.  It’s a perfect place for a picnic, with plenty of stopping places to lay out a rug, unpack the butties and paddle in the river.

Dunsop Bridge is in the heart of the Forest of Bowland, and also, oddly enough, virtually the geographical centre of Great Britain.  I stopped off at the pretty Post Office/Puddleducks café for a drink and had to fight my way through a huge number of ducks, all intent on tripping me up and snatching a few biscuit crumbs.  Having had a walk along the river, I drove on to the Inn at Whitewell, now well-known as the starting point for TV’s ‘The Trip’, the quirky roadtrip taken by Rob Brydon and Steve Coogan through NW England.  I love this place – it’s got an eclectic elegance and friendly atmosphere, a really well-stocked wine/delicatessen shop and intriguing antiques dotted all round.  Oh, and the food is superb.  Behind the building flows the River Hodder with a set of stepping stones, although the water was a bit too high and fast that day to risk a dunking.

Finishing off the day out I went across to Slaidburn, one of the most popular Bowland villages,  to have a snack at the Riverbank Tearooms.  The owners are rightly proud of their Green Tourism accreditation – and I can highly recommend the Lancashire Cheese and pickle sandwich.  Further up the road is Gisburn Forest, with excellent mountain bike trails and the wonderful tree-studded scenery that gives the area its name.  Stocks Reservoir has plenty of great picnic spots for tired walkers and cyclists; next time I may even be tempted to bring my bike …

Zoë Dawes, voted ‘Britain’s Best Travel Blogger’ in 2011, is a travel writer based in NW England. Read more in her popular blog The Quirky Traveller  and follow her on Twitter @quirkytraveller and on Face Book. Find out more about the Forest of Bowland here.