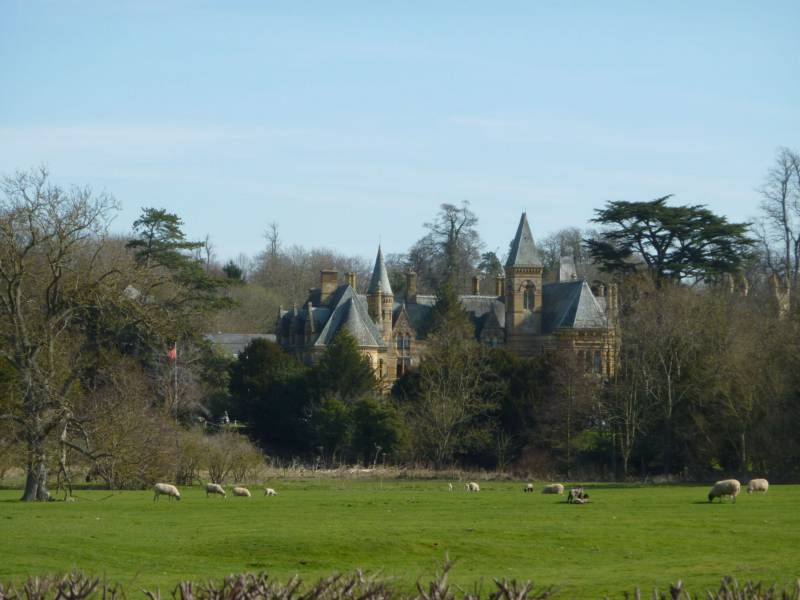 Staying somewhere that is said be haunted adds an extra frisson to any hotel stay – and the UK has any number of historic hotels with resident ghosts and spooky stories to match, involving ghostly landladies, angry chambermaids and all sorts of things that regularly go bump in the night. Here are some of our favourite UK haunted places to stay...

This historic coaching inn has been much expanded over the years and remains Thetford's most comfortable place to stay. The best rooms are the ones overlooking the river in the modern wing, while those with the most character are the ones facing onto King Street, a couple of which are said to be haunted by the ex-landlady of the hotel – indeed one member of staff admitted she would never spend a night in either!  The dog friendly hotel is perfectly placed for the delights of nearby Thetford Forest, and a welcoming place to come back to after a day's cycling and hiking in the woods.

With a name like that you'd put money on this being a scary place to stay, and Chillingham Castle doesn't disappoint, with a whole host of ghosts that have been spotted by residents over the years. It even runs its own ghost tours of the castle and grounds for both the enthusiast and the sceptic. But it delivers as a place to stay too, with eight very comfortable self-contained apartments divided between the main castle and a coaching block nearby, access to the castle's spectacular grounds and a location that's ideal for exploring further afield, including visits to its nearby castle counterpart in Alnwick.

No other hotel in York can surpass the location of the venerable Dean Court., slap bang opposite the Minster. Rooms have been given a contemporary makeover, and as there are only 37 of them there's a boutique feel - even if it's not quite exclusively boutique in tone and style. If you want to be in the city centre and handy for all the historic sights, this is the hotel for you. Not only that, it's famously haunted by an angry chambermaid who only appeared after the hotel's last refurbishment a decade ago.

Sitting in 40 acres of picturesque parkland, the neo-Gothic Ettington Park Hotel is a great place to escape to at the end of the day, a family-owned hotel full of exquisite antiques and fine paintings, yet managing a successful blend of traditional and contemporary styles. The hotel has a spa, including a swimming pool and sauna, but what brings a lot of guests is the fact that it's famous haunted by various ghosts. The spirits of an army officer and an elderly lady are often seen in the Long Gallery, books fly off the shelves in the library and the hotel's room 6 has a red cord to pull in case of ghostly emergencies.

Cornwall's most famous historic inn has been given quite a makeover since the days of Daphne du Maurier's famous novel, but the location on Bodmin Moor is as wild and  beguiling as ever. Unsurprisingly it's something of a magnet for tourists, who come for the Maurier museum and the ghosts of various smugglers and other ne'er do wells who are said to haunt the bar and restaurant and one of the rooms – in fact TV's 'Most Haunted' reckoned it was one of the scariest places they had ever visited. Whether you believe in all  that or not,  it's one of the most atmospheric and iconic Cornish locations you could choose to stay in.

It’s four-poster beds and bumps in the night at this self-styled jewel in the crown of Rye. Once a notorious smugglers’ den, this is now one of the oldest buildings in Rye and has all the charm you'd expect,  a traditional looking inn which somehow it manages to pack 31 rooms under its seemingly modest roof. It's about as charismatic and cosy a place as you could find – and has a few resident ghosts just to add to the atmosphere.

Spending the night in a cell might not be everyone’s idea of fun for a city break in Oxford, but at this converted jail you can do just that. Rooms have chunky, heavy doors with original ‘prison features’ and date back to the 1800s. The interior design is modern and funky, and the hotel boasts two bars as well as all the usual high-end trimmings. Located in the city centre, it’s a stone’s throw from the main attractions (Oxford Castle Unlocked is right next door). The prison theme is endlessly overworked, but be warned: not every room is a converted cell, so you need to request one specifically if that’s what you want. Do ask too about the ghosts of various executed prisoners who are supposed to roam the common areas and even a couple of the rooms.

With a location to die for at the top end of Regent Street, The Langham may just be central London's most conveniently situated hotel. It's also one of its most elegant, with the stately feel of a landmark building, no less than 380 luxurious and very spacious guest rooms and a bar (The Artesian) which is as good a place to sink a cocktail or two as exists in the capital.  It's also one of the country's most haunted places to stay, with various ghostly sitings, most famous of which is the Victorian gentleman who appears from time to time in room 333 – a doctor who murdered his wife while honeymooning at the hotel.

It's not every day you get to stay in a grade-one listed historic monument, let alone one that's over 800 years old and has its own ghost and is the venue for regular ghost hunts. Yet at St Briavels you not only get all that but at a budget price too, and a tremendous bucolic location on the edge of the Forest of Dean to boot. The nice thing about YHA St Briavels is that you're always aware that you're staying in a castle, with characterful rooms that pay great respect to the building, from the mysterious 'Oubliette' room (ask about the contents of the dungeon below) to the State Apartment with its so-called 'King's Seat', as well as two spacious dormitories at the top of the castle towers.