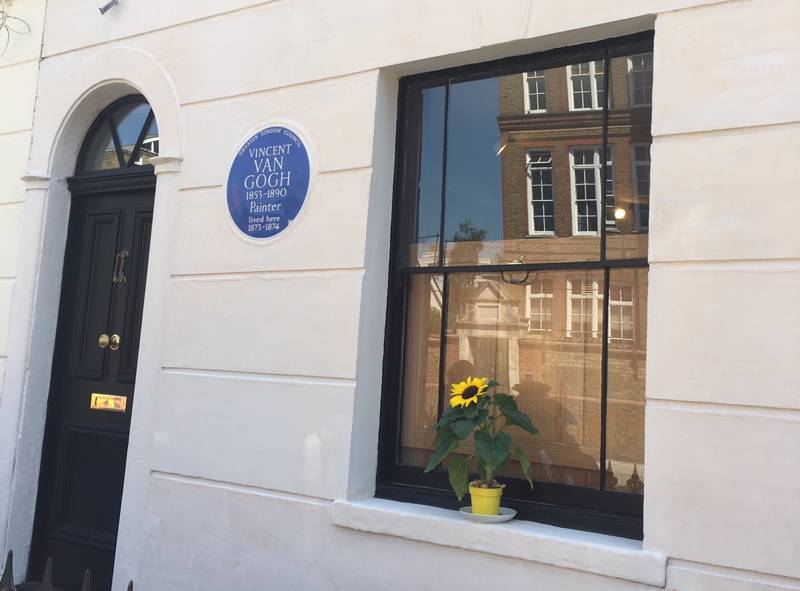 Back in the 1980s when I was writing the Rough Guide to Amsterdam, I read a book called the 'Van Gogh Assignment', learning for the first time that in 1873 the artist had spent at least a year in London, when he was just 20 years old – in Stockwell to be precise, not a million miles away from the first Rough Guides office.
The author Ken Wilkie uncovered all sorts of intrigues and managed to track down a rough sketch of the house by Van Gogh himself – probably one of the first ever pieces of work Van Gogh completed.  I've been fascinated by the connection ever since, which is why I was excited to hear that the house he lodged in – 87 Hackford Road, SW9 – had recently opened to the public and was running tours. Lived in by the same family for more than 50 years and in a terribly dilapidated condition, the house was purchased 7 years ago by Chinese businessman and musician James Wang, who with his daughter has spent several years and a great deal of money renovating the place to an approximation of how it would have looked in Vincent's day. As James said after he bought the property: 'I can't afford to buy Van Gogh's paintings, so I bought his house instead'.
Before you get too excited, I should say that there's nothing at all of Van Gogh in the building, although the neighbourhood tries its hardest to make up for this, tagging everything with the artist's  name: the plot opposite (which would have been fields in what was a genteel semi-rural district in 1873) is occupied by the recently renamed 'Van Gogh Primary School' and the next road down was renamed 'Van Gogh Walk' in 2013. That said, the house is still easily recognisable from the artist's murky pencil drawing that I first saw all those years ago – apart from its blue plaque and the fact that the corner was bombed in WW2 and has been replaced by a dinky 1950s terrace.
Van Gogh occupied the top floor bedroom and was by all accounts very happy living in Hackford Road. He didn't much enjoy schlepping up to Covent Garden every day to do a job he wasn't very good at – he was a salesman at Goupil, the art dealers, like his celebrated brother Theo. But he enjoyed his time in Britain, exploring London on foot and enjoying time with his new-found family;  indeed there's speculation that he fell in love with the daughter of his landlady, Eugenie, and even fathered an illegimitate son with her.
So what's the purpose of all this, apart from the chance to wallow in a great deal of speculation about what Vincent got up to before he was an artist? Mostly, it's about the unique history of the building – a typical London townhouse in many ways, still standing despite the bombs and expertly restored using traditional techniques and materials, but which was was uniquely the home of the one of the most recognised artists of modern times.
Inside the house, the Wangs are keen to remember not only Van Gogh's time here but also his legacy as an artist. They've re-planted the garden with some of the flowers that Vincent describes in the many letters he wrote from here, along  (naturally) with a few pots of sunflowers, and added a studio for resident visiting artists. The house is going to host regular exhibitions, and indeed has already begun with an installation of objects and videos by Saskia Olde Wolbers, 'Unreliable Biographers', all about Hackford Road. In July the house will also host performances of Nicholas Wright's play about the artist's time in London – 'Vincent's Brixton' – using the whole of the house at the backdrop, which is sure to be memorable. It's a new kid on the block of the London art world, and well worth a visit.
Find out more and book a tour of Van Gogh's House here; get details of 'Vincent's Brixton' here.