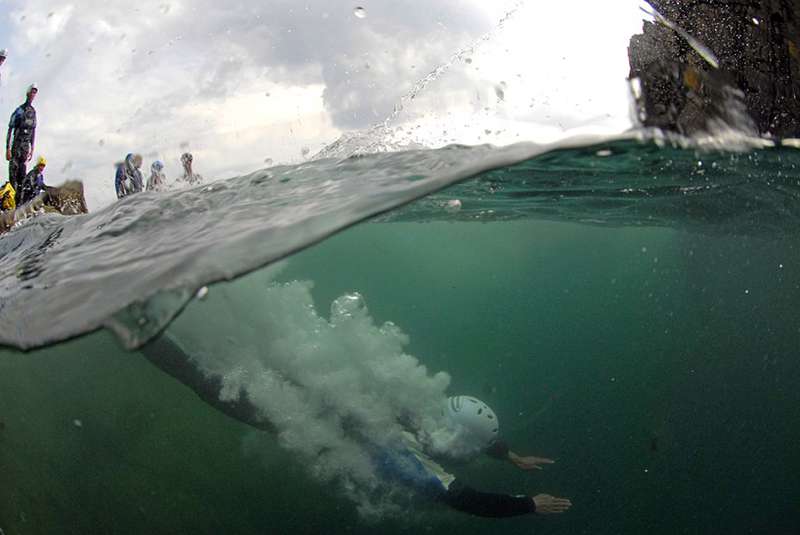 I’m going to own up to something here. I’m terrified of the sea. Yep, me, a travel writer. Scared of the stuff that surrounds us here in Britain.

But, like all good explorers, I’m willing to put my own comfort (and sanity) aside for the sake of discovering something new. And so, last week I wetsuited up and joined an Adventure Sark coasteering expedition around the island of Sark.

My guide for the morning’s adventuring was Ant Ford-Parker – and he was raring to go. First stop: the harbour wall, and what I estimated to be a 15-foot jump into cold waters. Gulp.

There was nothing for it but to close my eyes, take a deep breath and step away from dry land. It was over in a second – and I could breath again.

First challenge completed – and wetsuit speedily filling up with icy tendrils of that always-chilly British water – we swam quickly to the coastline, where Ant pointed out an old rusting chain left behind by some ancient seagoer. As the waves swelled against the cliffs the chain banged ominously and I struggled to get a foothold on the rock. As most beginners do, I tried to use my arms to climb more than my legs, and it quickly became apparent that this was futile – I’m simply not strong enough to let my leg muscles off so lightly.

As we scrambled further along the water’s edge I forgot all about the cold, instead focusing on the number of bruises I was surely accumulating. Not one for those who like to look glamorous this; I spent most of my time bum in the air, fingers clinging to the rocks beneath me, shins banging on previously unseen outcrops.

But the joy of coasteering is in the jumping and after another long drop from a great height I was once again all smiles. Even better, coasteering allows you to reach places you otherwise couldn’t, including some very out-of-the-way caves. We swam into Cathedral Cave, where the light illuminates one specific rock like an altar at certain times of day, and a cave so undiscovered it’s even unnamed, where the detritus of some long-lost ship, or possibly the gear of some erstwhile smuggler (if we’re to be really poetic) had got itself wedged in the dark recesses. To stand where very few others have done so before is a moving experience, and something we so rarely achieve within our extensively charted isles. If this is just one cave of many, who knows what else is out there?

Returning to the harbour, I did indeed discover a patchwork of developing bruises, but along with the injuries came a sense of achievement. I may not have the bravery (or the muscles) to return to coasteering, but I will return to Sark – and to exploring its waters. Perhaps I can learn to love the sea after all.

Adventure Sark run coasteering day trips around the island of Sark. Find out more hem or from www.sarkislandhotels.com/kayaking