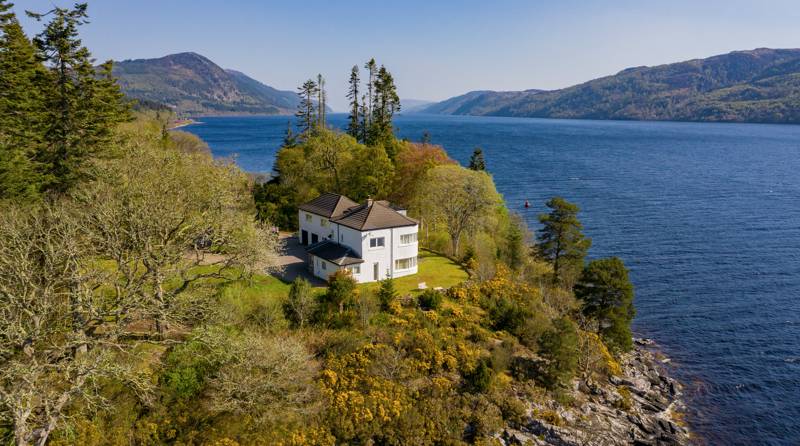 The ultimate Scottish loch-side retreat – in a breathtaking setting right on the shores of Loch Ness.

An exceptional country house in a breathtaking setting right on the shores of Loch Ness, Point Clair House is perhaps the ultimate Scottish loch-side property. Set high on its own wooded peninsula, between the villages of Fort Augustus and Invermoriston, it has the sort of views that you never get tired of. The house has six bedrooms, which can comfortably accommodate up to 13 people, direct access to the loch with its own shingle beach and has been recently kitted out by its owners to an ultra-exacting standard, making it quite frankly a luxury Scottish property like no other. Arriving here, you might really think you have died and gone to heaven.

The house was built in the 1930s by a local ship's captain and there are watery references throughout, from a bow-ended front built to resemble the prow of a ship to the uninterrupted views of the loch, which extend in every direction. On top of this spectacular location, it's a very comfortable house in every way, recently and very sensitively restored by its owners, who have furnished it with all sorts of antique oddities – lovely old work benches and the odd church pew – as well as kitting it out with every modern feature you could think of, including but not limited to good wifi throughout, a state-of-the -art kitchen and some very stylishly updated bathrooms. There is central heating throughout, and the house's water comes directly from Loch Ness itself.

Point Clair House has 6 double bedrooms (5 of which have en-suite bathrooms), a large living room that makes the most of the views from a panoramic curved window and has a large TV, bluetooth speaker and cosy wood-burner; there's also a well-equipped kitchen and utility room, and a dining room whose unique table, custom-made from the doors of a Danish cathedral, can accommodate up to 14 people. The cinema room has been furnished with several newly restored 1930s theatre chairs that give a touch of  atmosphere while you're watching Sky or Netflix on its massive 90-inch surround-sound TV. There's a Sony PlayStation console with plenty of games for younger members of the family, who may also want to try out the games room, which has a table football, a pool table and any number of arcade games. There are also plenty of board games and books for rainy days, naturally including a small library of tomes on the Loch Ness Monster.

The uninterrupted views from the property are superb, taking in Fort Augustus Abbey at the end of the loch, the lower slopes of the Monadhliath Mountains across the water and north right up the vast blue sweep of the loch towards Drumnadrochit, where there's a Loch Ness visitor centre. Most of the bedrooms come with binoculars in case you want to spend the days looking for Nessie, and the house has four acres of grounds to enjoy – taking in a large lawn for sports and other activities, formal gardens and wooded corners and a tree-lined path that leads down to a private beach and sheltered harbour, from where you can swim in the deep cold waters or launch your own kayak or canoe.

The grounds are certainly large enough for idle wanders, with plenty of benches around to soak up the views. There are also plenty of way-marked trails in the area, and you can drive around the Loch taking in the views or walk, cycle or ride the new 'Loch Ness 360' trail, a 80-mile-long circular route taking in the Great Glen Way and South Loch Ness Trail. Boat cruises also operate from various locations on the loch shore, giving visitors the chance to look for the monster. But really you might want to just stay put and make the most of the house and its grounds – rabbits hop around nearby, there are grouse and wild pheasants and red squirrels, seals basking in the loch, and occasionally you might see a stag or a deer wander down to the water's edge for a drink.  Why on earth would you want leave?

Six double bedrooms – 5 of which have en-suite bathrooms – that comfortably sleep up to 13 people.

The A9 runs from the cities of Perth, Edinburgh and Glasgow to Inverness, from where you can follow the A82 for about 45 minutes to Invermoriston. Pass Loch Ness Holiday Lodges on your left hand side and carry on driving for a further 5 minutes and Point Clair House is on your left hand side.If you are travelling from Fort William follow the A82 until you reach Fort Augustus.  The house is about 10 minutes' drive from Fort Augustus on your right-hand side. Train from Edinburgh or Glasgow Queen Street to Inverness takes approximately 3.5 hours, from where local buses travel to Loch Ness.

See Self Catering in Inverness 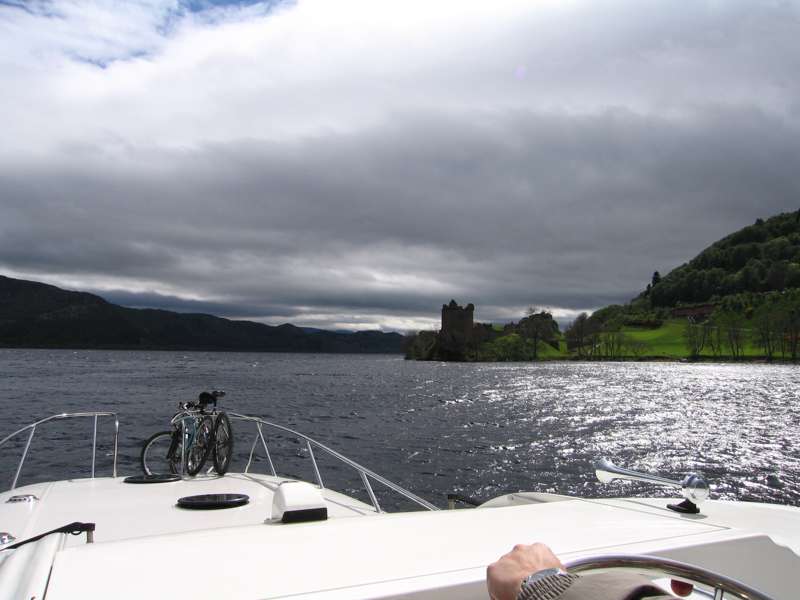 Surely the most famous loch in the world