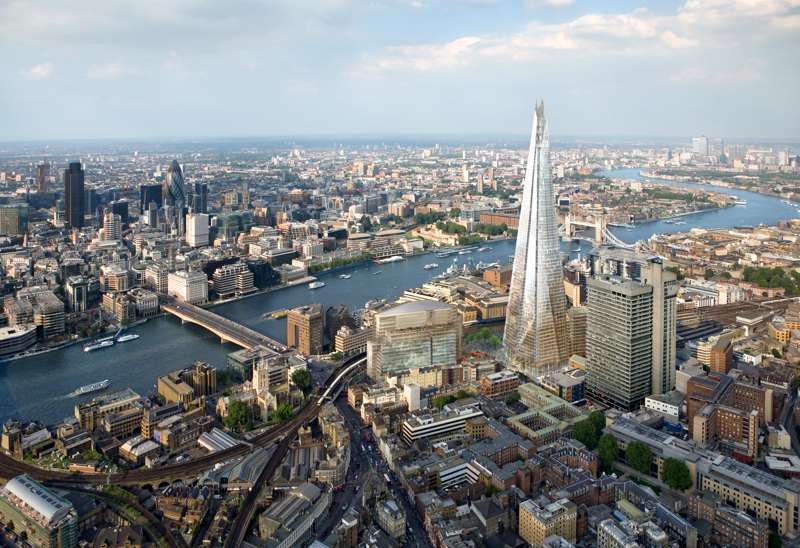 The View from the Shard

London's changed. Historically a low-rise city, for centuries the best view of the capital was the one from St Paul's. This was famously eclipsed by the building of the Post Office Tower (now the BT Tower) and its famous revolving restaurant in 1966, although the observation deck there closed in 1981, and the next big high-rise effort, the tower at the heart of the Canary Wharf development in the 1980s, wasn't interested in marketing itself as a tourist attraction. Then it went quiet again until London's current craze for towers that aim to be both big and clever culminated in Renzo Piano's The Shard – the latest London building to be known by an affectionate nickname even before it had been finished. Indeed The Shard feels as if it's been part of London's skyline for a while, yet it's only from February 1 this year that you'll be able to get inside, and most importantly ascend 244 metres to its 72nd floor for a view from the top of what is London's (and, for the moment, the European Union's) tallest building – and the only one with a public observation deck.

The entrance is oddly anticlimactic, a back door tucked away behind the tube station, and a lobby dominated by glass murals of famous London figures striking unusual poses: Kate and Wills as pearly king and queen, Boris Johnson shining Red Ken's shoes, Hitchcock in the midst of Trafalgar Square's pigeons – you get the picture. There's the inevitable photo call, whereby you can get your face on the body of a famous Londoner or two (and pay for the privilege), before two high-speed lifts whisk you to up to the 68th floor at a speed of 6 metres per second, to the accompaniment of soaring voices and orchestra music – past offices, the Shangri-la hotel and its restaurant, and some of the world's most expensive private  apartments. On floor 33 you can test your knowledge of London walking across a map littered with facts and events, while floor 68 fills you in on different types of clouds and what they might mean for your visit (useful the day we were there, when we had the full-on rain-laden nimbostratus). There's also a shop selling high-class souvenirs. The main observation deck is a floor up, on the 69th storey, where floor-to-celing glass gives impressive 360-degree views and the chance to look through so-called 'tell-scopes' – digital telescopes with large touch screens that either show you the live view or an alternative that has been conveniently photographed on a sunny day, along with nuggets of info to help you identify what you're looking at. Upstairs from here is a partially roofed gallery with similarly gob-smacking views that again go all the way round – upriver to the West End, across the water to the City and east as the river snakes its way to the sea.

Is it worth 25 quid? Probably not. London is in any case a city best experienced at ground level – less vertical than, say, Hong Kong or New York, and with most of its best features flattened out by an aerial view. That said, £24.95  is a lot less than the £40 million the guys immediately  below have paid for their apartments. And, hey, it provides what are without question the best views of the capital – and, better than that, a new and unique perspective on London.