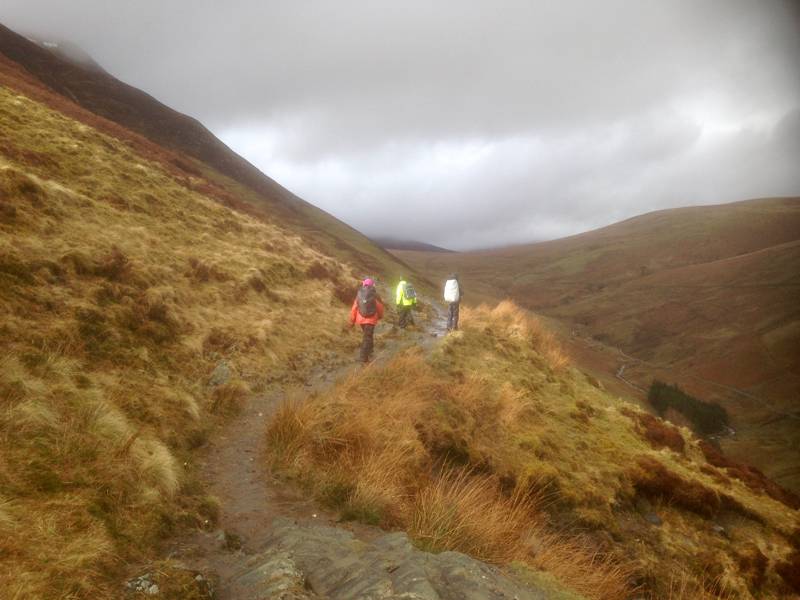 How to Go Hiking: a Novice's Guide

Time has passed and the expensive counselling has obviously helped. In due course I should be able once more to wear large boots and a colourful fleece. I may even feel like buying something made of Gore-Tex.

But, says the therapist – usually with a weary sigh – I am never again to take hiking advice from a man wearing khaki gaiters. This man may well have a pair of ski poles and a GPS. He might even have his sandwiches in a little snap-shut plastic box. But for all his knowledgeable talk about rocks and clouds, I am never, ever – often, her jabbing finger makes little dints in my chest at this point – ever to follow his advice.

Trouble is, the English Lake District is full of men with khaki gaiters and ski poles, striding confidently about. Ask them what the path ahead is like and they say it’s a bit of a climb, when what they mean is you’re going to need stepladders and an oxygen tent. I was misled after a simple enquiry about Jack’s Rake, a route up a cliff called Pavey Ark in the central Lakeland mountains. “It’s easy”, said the man. “Bit of a climb though”.

Well I’m here to tell you that it is, in fact, not easy at all. It’s a very hard route – a route not to be attempted unless you’ve got four arms each about nine feet long. An octopus could climb Jack’s Rake – I got stuck about a third of the way up, while behind me a queue of hardy men shouted helpful things like “keep going, it’s easy” and “if you fall off, try to fall sideways”.

“If you fall off, try to fall sideways”.

I should have known better. When it comes to hiking in the Lake District – hiking anywhere come to that – it pays to know your own limitations. For most walkers this boils down to taking a peek at the map and keeping well away from the tricky bits with no recognisable path. It’s usually easy to spot these in the Lake District because the tricky bits are called things like Foul Crag, Black Mire, Sharp Edge or Death-Plunge Peak. All right, I made the last one up, but there’s definitely a hill north of Keswick called Great Cockup, which I’d think twice about climbing. Only bad things are going to happen to you on Great Cockup.

In a region where a mountain is known as a ‘fell’ (you see what they did there?), it comes as no great surprise to find that anything marked on the map as a ‘crag’, ‘knott’ or ‘needle’ is also probably going to have sharp pointy bits, which you have no business climbing. Sometimes it’s a little harder to figure out. Is Sourmilk Ghyll going to be an easy stroll or not? And what the hell is a ‘ghyll’ anyway? You can only hope that Heron Pike is a geological feature and not some giant bird-fish with razor-sharp teeth. Warnscale Bottom doesn’t really bear thinking about.

'Only bad things are going to happen to you on Great Cockup.'

Once you’ve planned a route, there’s the thorny question of clothing and equipment. Pioneer 19th-century rock-climber Walter Parry Haskett Smith made do with hob-nailed boots, a pipe and a tweed jacket, while ‘Lake Poet’ Samuel Taylor Coleridge generally just took a notebook and quill (and a satchel of opium, obviously). Colour-coordination is crucial – the air ambulance needs to be able to pick you out from a fair height, so day-glo is the way to go.

Suitably kitted out, it’s time to address the most important issue, namely where to stash your map and compass. Ideally, you want to fold the map up so that it fits into your shiny see-through map case, which then flaps ostentatiously around your neck in the wind. This way everyone can see how serious you are about hiking. A compass is very important too, and the bigger, heavier and more expensive the better. I use mine to weigh down my map case whenever I stop for lunch, but apparently they have other uses too.

Your choice of accommodation also says much about the kind of hiker you are. Staying at hostels that you can only walk to is a good way to impress, though naturally you’ll actually have to walk to them. And these low-impact, eco-hostels – while clearly very fine places in many ways – also tend to have nowhere to charge your iPad or plug in a portable espresso machine.

'I use my compass to weigh down my map case whenever I stop for lunch, but apparently they have other uses too.'

You could always book into one of the classic lakeland hikers’ inns instead, such as the Old Dungeon Ghyll or the Wasdale Head. Park a mile or so down the road, put on the gear, run the last hundred yards or so to work up a bit of a sweat, and no one will be any the wiser. The only drawback is that you have to make a big fuss about leaving at 6am every morning – “I just thought I’d climb Scafell before breakfast” – but a couple of hours tucked up in the back seat of the car sees you right, before returning to tackle a mountainous Full English breakfast.

Which reminds me. Hikers will hear a lot about the Lake District’s other local food speciality, the rock-solid, energy-boosting peppermint slab that is Kendal Mint-Cake. Some people might even suggest you try some. After all, it’s been carried up the world’s highest mountains: Chris Bonington had a piece on the top of Everest, though I understand he used it to weigh down his map case when he stopped for lunch. Anyway, it’s entirely a matter for you – if dentistry is cheap where you live, go right ahead.

The only remaining piece of advice is to keep an eye on the weather. Basically, if you can’t see the mountains it’s raining, and if you can see them it’s going to rain. And if you’re really unsure about the weather, then it’s probably best never to go hiking in England in any month containing letters.

This is an extract from ‘Takoradi to the stars (via Huddersfield)’, by travel blogger and Cool Places contributor Jules Brown –  available from Amazon as a paperback (£5.99) or ebook (£2.99).