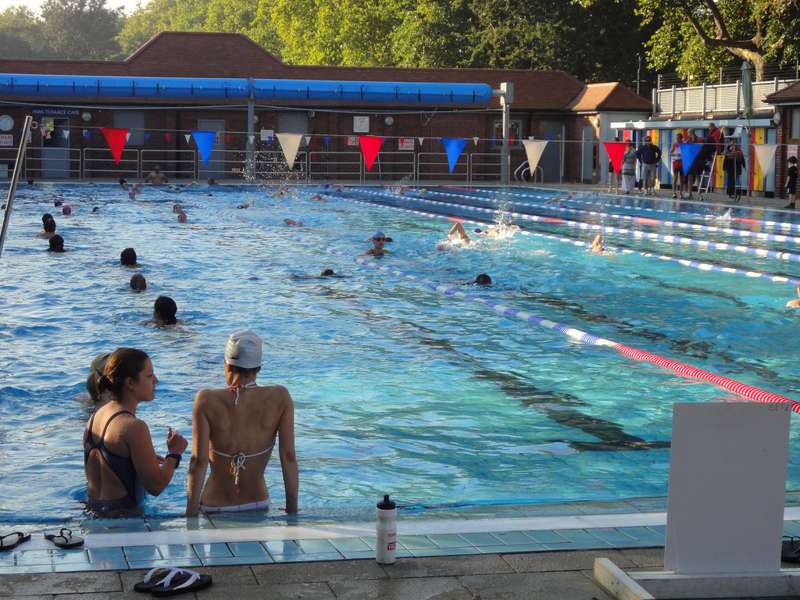 With summer here at last, and the extraordinary feats of Britain's sportsmen and women at the Olympics to inspire us, there's no excuse for not putting in a few lengths at one of the capital's wonderful open-air lidos. There are great pools north and south of the river, and you can even emulate the efforts of our heroes in the heart of London's West End. But don't put it off – most of them are only open until the end of August.

Situated atop a Covent Garden roof on the fringes of London’s buzzing Theatreland, the Oasis’s open-air pool (there’s also an indoor one) is a tranquil, well… oasis amidst the hubbub of central London.  Remarkably, records date a pool on this Endell Street site to as far back as 1728. The current 27m, three-lane lido has been soaking swimmers since before the 1960s started swinging, and was, in its heyday, something of a watering-hole for louche Soho spivs and luvvies treading the boards at the Shaftesbury Theatre opposite.  Today the pool is a heaving throng of office workers out for a lunchtime dip so make sure you plan your visit accordingly.

Opened in 1937 as a sister pool to a now sadly defunct one in Victoria Park, it’s easy to see why locals affectionately refer to Brockwell Park Lido as ‘Brixton’s Beach’. On scorching summer days, the unheated, Olympic-sized pool attracts a young crowd of bathers (both the solar and aquatic kind), not least for its barbecues and loungers, all housed within a Grade II listed art-deco masterpiece. There’s also refreshingly few ‘serious’ swimmers. A true icon of south London life.

As far as London locales go, Parliament Hill Lido’s Hampstead Heath setting takes some beating, and the pool is the capital’s only year-round open lido, making it one of the city’s more popular swimming haunts. Like its Brockwell counterpart, Parliament Hill was built in the late 1930s upon an altruistic wave of town planning, transforming pockets of the city into the far-flung shores the masses could only dream of. Though this unheated 200-footer can be a shade on the shivery side (even in summer), you can’t help but fall for the art deco charms and all-round bonhomie of this busy north London institution.

Thanks to the dogged efforts of local campaigners, London Fields’ beloved lido was reopened in 2006 having sat parched and silent for 18 years. Since its rebirth, London’s only 50-metre heated outdoor pool has proven amazingly popular with trendy locals and young families alike. With its colourful bunting and mutli-coloured lockers shouting seaside kitsch, there are few better places to spend a sunny afternoon in Hackney than its spacious poolside sun terrace.

No round-up of London’s best swimming pools would be complete without a nod to the famous Tooting Bec Lido. At 91 metres long, Tooting Bec is Britain’s biggest and Europe’s second biggest outdoor freshwater pool. It is also one of the UK’s oldest. Built in 1906, its fin de siècle functionality gave way to the beach-hut inspired changing rooms of the 1930s which remain lovingly intact today. The bird-inhabited trees surrounding this quiet corner of Tooting Common tower pleasingly over the perimeter. There’s a happy medium of serious swimmers (the South London Swimming Club have called Tooting home since the pool’s opening) and recreationals, with a children’s pool, well-kempt grass for sunbathing and decent café serving chips and ice cream.