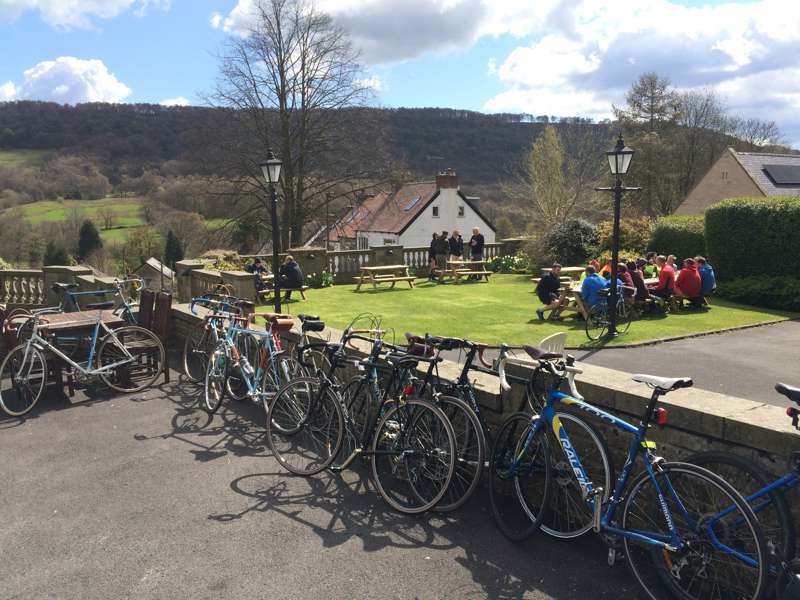 "It is by riding a bicycle that you learn the contours of a country best" Ernest Hemingway.

There is no better way to see a country than by bike. At one with nature; slow enough to take in your surroundings, stopping as an when you please, but fast enough to cover a decent amount of ground in a relatively short space of time. A week-long tour of the UK would be lovely, but you often can't set set aside a whole week to ride your bike, so why not go for a weekend cycling trip instead? Set off on Saturday morning (or even Friday night if you can) for your chosen train station and enjoy a day of exploring, arriving at your evening destination pleasantly worn out and entitled to as much food as you can manage, not to mention a few glasses of wine, before bed! After another day in the saddle, you arrive at your final destination for a celebratory photo, a well-deserved beer and a quick train ride home. Not a bad weekend of exercise, exploring, food and drink – all without having to take any time off work!

London to Brighton (and back)

London to Brighton is a classic cycling challenge and one that should be on everyone's cycling 'bucket list'. The good news is it couldn't be easier to do in a weekend! The route is 55 miles each way, heading south into the Surrey Hills and the Sussex Downs, before taking on the famous Ditchling Beacon before dropping down to the coast and into Brighton. The beauty of this route is its flexibility; if you want to head back to London straight away you can do just that very easily; either by jumping on the train, or by simply turning around and heading back the way you came (after some fish and chips of course).However, we recommend staying the night, and riding the return leg the next day. Brighton is a wonderful place to stay for one night – maybe at YHA Brighton which has first-class facilities, a city centre location and has very cool double rooms for £25 a night. After breakfast at The Cyclist, just jump back on the bike and head back to London!

The Yorkshire Coast-to-Coast route offers a much more rugged cycling experience, starting in Whitby on the east coast and heading directly across country to Whitehaven. We recommend getting to Whitby on Friday night and staying at Dillon's; head to the Abbey and channel your inner Dracula and on Saturday morning strike out west through the North York Moors and into the Yorkshire Dales. The first leg is 80 miles, so it's no small challenge, but the countryside provides its own reward. Spend the night in Hawes, before riding the next 80 miles to Whitehaven, passing through Kendall and around Lake Windermere, taking in the best of the Lake District at the same time. If you are able to make a long weekend of it, we suggest staying the night in Whitehaven and travelling back on the Monday.

The Peak District is our favourite place to cycle! Close enough to London and easy to reach by train, and as far away from the capital in cycling terms as you could imagine, with quiet country roads and beautiful stone villages with great pubs. We recommend starting in the south of the Peaks, at the pretty town of Matlock, and setting off north from there. Matlock is reachable by train in just over two hours, or you can drive and leave your car there. From here, head west into the Peaks and then strike out north to the Hope Valley via a stop in Bakewell for tea and, of course, a Bakewell pudding! Castleton is your destination, but if you're making good time we suggest going past Castleton,into the Edale valley and over Mam Nick hill; the climb is great, and the descent down Winnats Pass exhilarating. Stay at Losehill Hall and walk into town to one of the many excellent pubs for dinner. On Sunday it's time to head south on the western side of the Peaks, via Buxton and Newhaven, before returning to Matlock to pick up the car or hop on the train home.

Wales offers some of the best cycling in the UK, and most of it can be experienced on a south-to-north ride over a couple of days. Take the train to Cardiff on Friday night and stay at the budget hotel Sleeperz, next to the station. Day one of the ride takes you north out of Cardiff and straight into the Brecon Beacons, one of the most beautiful areas of the UK and the perfect place to see from a bicycle. Spend the night at the halfway point in Llanidloes, before riding the second leg up through Snowdon National Park to Bangor. You can then jump on the train from Bangor back towards London, or stay the night in the quaint North Wales town.

Way out West: Bristol to Plymouth

The aouthwest of England holds some of the hilliest terrain in the UK and, in Exmoor and Dartmoor National Parks, some of the best scenery too. The ride from Bristol to Plymouth takes in both parks and some of the best bits of Somerset and Devon. Arriving in Bristol on Friday night, stay at Brooks Guesthouse in the city centre and head to trendy College Green for dinner and a drink. On Saturday morning head south out of Bristol towards the cycling mecca of Cheddar Gorge before following the coast round to Exmoor for a lovely afternoon cycling on the moor. Stay at the picturesque Royal Oak Exmoor for a night and from there Exmoor head southwest into Dartmoor for another epic stretch of wilderness (and plenty of hills), before arriving in Plymouth, ready for fish and chips and a pint of cider!

Like London to Brighton, Bournemouth to Brighton is one of the more easily achievable challenges on this list. Not only is the mileage among the lowest, but the logistics from London are also that little bit easier. The train to Bournemouth takes no time at all, so you can depart London on the Saturday morning (if you can leave Friday and stay in Bournemouth, at xxxx, then so much the better). The Saturday leg of the ride takes you on a spectacular cycle through the centre of the New Forest, complete with winding roads and wild ponies. Finish up day one in the lovely Hampshire village of Droxford. Day two is as picturesque as day one, as you wind your way through the South Downs, onto the coast road and into Brighton. You will arrive in Brighton with plenty of time to have a pint (and some fish and chips!) before jumping on the train back to London.

Dirty Wknd is the leading expert in UK wide cycling weekends and group rides. Find out more and join a group weekend away by visiting www.dirtywknd.com