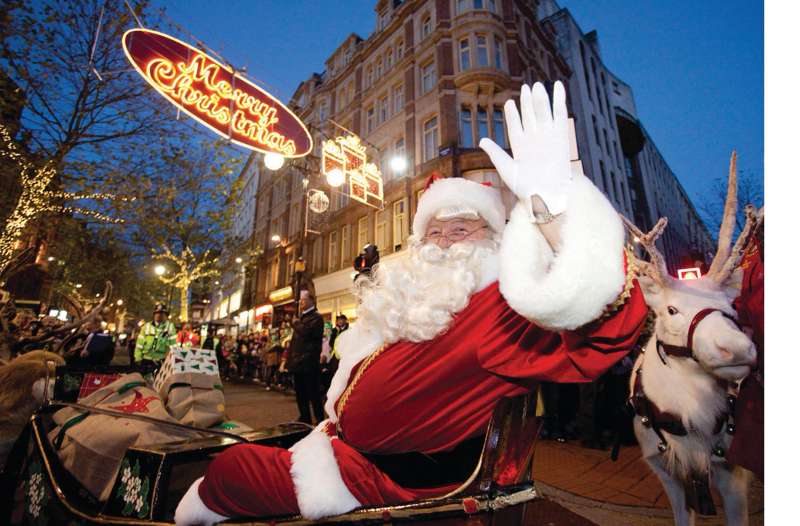 Christmas starts earlier every year, and we're now really into the swing of it, with nativity trails, Christmas markets, ice-skating and more. It's a great time of year, not only to get into the festive spirit in your hometown, but also to check out what they're doing to celebrate the season in other towns and cities around Britain. Here's our round-up...

Bath really pulls out all the stops come the Christmas period, with a pretty fabulous Christmas Market between the abbey and the baths, ice-skating in the city centre and a chance to enjoy mulled wine in the Apres-Ski bar. Or just check out the baths themselves: what could be better than a winter bask in the warm spa waters?

Lots for kids in Belfast this December, with the chance to make craft offerings with real elves in the city's Learning Space; the same place also offers the opportunity to go on an elf hunt, while there's a decent Christmas Market outside City Hall. There's even the chance to meet Santa on the Titanic!

Birmingham's 'Frankfurt' Christmas Market is the largest outside Germany, and a fabulously festive affair, with 180 stalls so you can shop till you drop while consuming vast amounts of gluhwein and bratwurst!

Cardiff's Christmas Market is up and running in the city centre around the Hayes, Trinity and Working Street and St John's area, and is supplemented by ice-skating and and an ice café at the city centre's Ferris Wheel. Lots of authentic Welsh products for sale too.

Durham's award-winning 'Christmas Festival' runs from December 5 for three days and includes all sorts of events, from a craft and gift marquee on Palace Green to a food market in the cathedral cloisters. There are also carol services in the cathedral and a wonderful children's lantern parade on Saturday Dec 6.

Edinburgh never does anything by halves so there are six weeks' worth of entertainment in the build-up to Christmas. George St is closed off to traffic so the restaurants can have late-opening terraces; there's a European Christmas Market in Princes Street Gardens, and of course an ice rink, a Christmas Tree Maze and various rides and attractions in 'Santa Land'.

There's an emphasis on shopping in Leeds when the ChristKindelmarkt takes over Millennium Square int he centre of Leeds and there's a also a reindeer trail around the city centre, where you are encouraged to take your own reindeer selfies. Oddly you can also make Gothic Christmas decorations in the Thackray Medical Museum if that floats your boat, while the West Yorkshire Playhouse is showing Raymond Briggs's bloomin' Father Christmas.

It's not in Norwich itself but nearby Thursford hosts the largest Christmas Spectacular in the country believe it or not– a three-hour performance of seasonal razamatazz that's always popular. In the city itself there's a Christmas Tree Trail, with trees positioned in historic buildings on a Twelve Days of Christmas theme.

With brass bands, stilt-walkers and regular visits from actual reindeer we like to think Nottingham is striving to be a bit different this year, although they do the traditional stuff pretty well too, with performances from the angelic Lace City Chorus and a good Christmas Market and ice-skating on Market Square.

York's St Nicholas Fair is one of the more atmospheric Christmas markets around the country, with lots of Victoriana and folk in Dickensian dress. There's also a seasonal 'Made in Yorkshire' market in the medieval guildhall, and if you've had your fill of shopping, there's nowhere better to both sing and listen to carols than the glorious Minster.