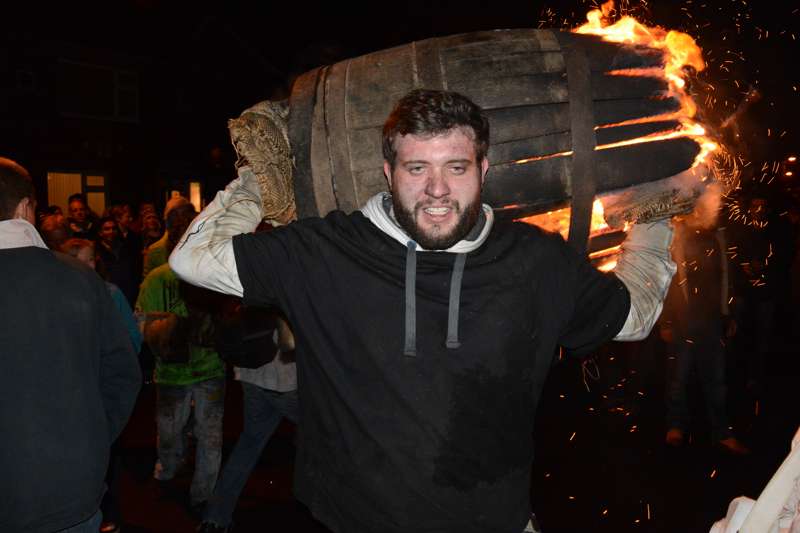 Bonfire Night... but not as we know it

Edward Teach  – better known to the world as Blackbeard, the pirate – famously used to fill his hair with lit firecrackers and bits of burning rope before going on the rampage, in order to make himself look demonic and scare the living daylights out of people. Unsurprisingly, it generally worked.

Teach was originally from the Southwest of England, and it seems his hair-raising penchant for pyromaniacal high jinx is in the blood down this way. I'm in the little Devonian town of Ottery St Mary, and a big man with an out-of-control beard is charging right at me, with fire flickering in his eyes and his entire head ablaze. I yelp (manfully, of course) and join hundreds of other people scrambling out of his path.

Blackbeard performs an unlikely, but graceful little pirouette, and the inferno on his back – which comes from a flaming barrel – intensifies. He is surrounded by other men, all with soot-smudged faces and hair full of embers and ashes. One of them demands the burning barrel. The big blazing baton is surrendered. The new carrier of the flame hoists it onto his shoulders and runs harum-scarum into the night, scattering onlookers asunder in his wake.

It feels like I've blundered into some sort of pirate party, but actually this is all part of a proud tradition that has played out annually in Ottery since at least a century before Blackbeard began wreaking terror around the Caribbean. Maybe Teach really did get some inspiration from these very streets.

Every November 5, the men, women and children of this usually quiet town take to the streets and celebrate bonfire night in a truly unique fashion: by setting fire to tar-lined barrels and running through the streets with them held aloft on their shoulders or heads. It's the kind of thing that gives health-and-safety reps night sweats, but it's one of the best spectator sports I've ever seen.

And clearly I'm not alone. Around 20,000 people flock to the town to see this pyros' pantomime play out every year. As the cider swilling gets going, and the atmosphere gets increasingly boisterous, many would like to be more than just spectators – but they can't. Participation is strictly for Otterians, and even the locals have to come up through the ranks.

Andy Wade, who has been involved for the last three decades, tells me how barrel runners are blooded in the art from the age of eight, when they take part in the junior version of the event (which is exactly the same, except with slightly smaller barrels). "Then they progress to the intermediate barrels," says Andy. "And then – if they're big enough and ugly enough – they move up to the men's barrels."

Throughout the evening, which culminates with a whopping great bonfire, a total of 17 barrels are set aflame and run around the streets of the town. The barrels have been carefully lined with tar several times throughout the year, and traditionally each would be sponsored by a local pub. Only four of Ottery's old drinking houses remain – the Volunteer, the Lamb & Flag, the London and the Kings Arms – and each of these has several barrels lit outside their doors.

Many villages and towns throughout the UK used to have barrel rolling and burning traditions, but Ottery's head-height version of the activity is unique. Although the event's exact origins have been lost in time, it's thought that the fiery festival's roots go back to the Gunpowder Plot of 1605. There's no specific objective or competitive element to the pursuit – the challenge is simply to get the flaming barrel up on your shoulders and to run around with it for as long as possible, without dropping or letting it go out (hence the pirouettes, which get extra oxygen into the inferno).

It looks like madness to me, but according to Andy, I ain't seen nothing. "It was proper mayhem when I was young," he recalls with a chuckle. "People used to get cidered-up and there was plenty of fighting over the barrels. Things used to get sorted out on November 5."

The crowd suddenly roars, and I look up to see Blackbeard in action again. The barrel has been burning for a while and is seriously falling apart. No one else will go near it, but he hauls the glowing mess onto his great hirsute head, and as a cascade of sparks and embers falls around his ears like an anti-ice-bucket challenge, runs straight at me. As the smell of burning tar and hair wafts towards me, I suspect a few things are going to get sorted out this November 5 too – not least the length of his beard.