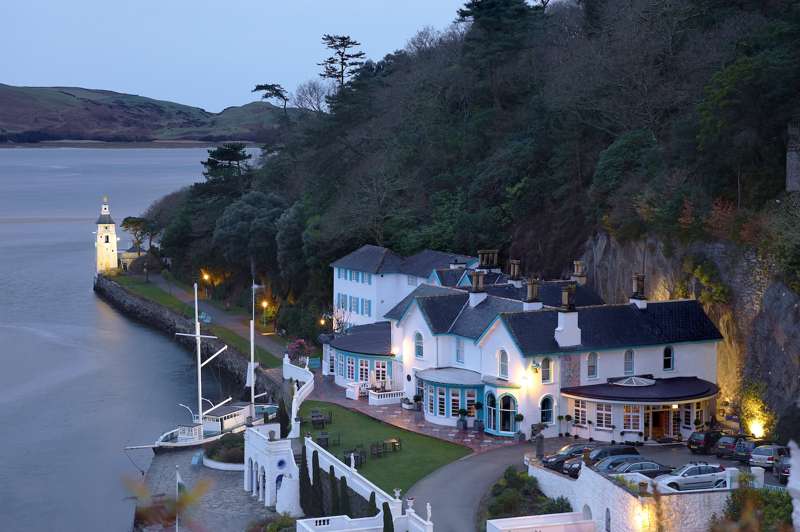 It's an odd thing, but in the cult Sixties TV show, The Prisoner, which was set in Portmeirion, Patrick Macgoohan spent most of his time trying to escape. Now, if there's one thing you won't want to do when you arrive here, it's leave. In fact, this purpose-built village, which has been a resort since the 1920s, is about as magical a place to stay as you could imagine – the creation of one man, William Clough Ellis, who was inspired not only by the architecture of Italy and the Mediterranean, but also wanted to create somewhere beautiful according to his imagination.

He certainly had the perfect location for his project. The village is located in a beautiful part of North Wales, on the edge of Snowdonia on the estuary of the Dwyryd river, whose wide tidal sands are visible from all over the village, which scales the hills above in a tumble of colour and invention. The Hotel Portmeirion, right by the water, was the focal point of William Ellis's vision: he knew that the village would have to attract tourists and so he rebuilt this derelict building by the water's edge as the village's hotel,  adding a new wing and later its lovely curvy art deco dining room, and in doing so created one of the most iconic hotels in Wales, and one which soon became a favourite haunt of celebrities, writers and politicians. You name it, everyone wanted to stay at Portmeirion – that is until a fire gutted the place in th 1980s, since when it has been restored to its former glory.

The hotel is comfy rather than grand, with 14 traditionally decorated rooms, and since 2001 its accommodation has been supplemented by Castell Deudraeth, a crenellated Victorian mansion whose baronial features give way to 11 further spacious rooms and suites decorated in a crisp, contemporary style. Rooms here have all mod cons – flatscreen TVs, DVD players, wifi and their own kitchenettes – and you're a little separated from the main bustle of the village, while still getting to enjoy all its facilities and unique atmosphere.

Of course if you really want to live out the Prisoner fantasy you'll need to stay in one of the village cottages. There are 15 in total, sleeping from 3 to 8 people, and they range from options right in the centre of the village to others in much more isolated locations – though still naturally only a few minutes' walk from all the village facilities. They all have TV and wifi and you can arrange papers and food deliveries with the village shop – in short you could make believe you really live here for a while. Unfortunately you can't stay in the house where Number 6 lived - it's now used as The Prisoner shop.