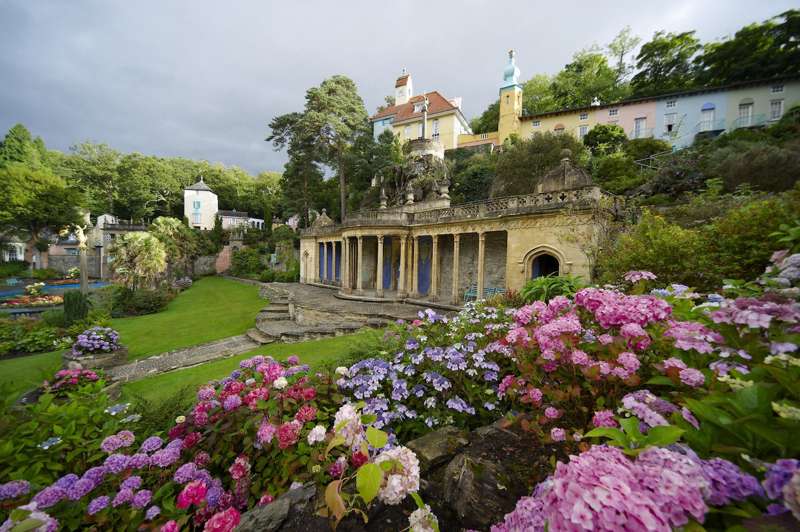 Designed and built by the architect and part-time magician, Clough Williams Ellis, the Welsh coastal village of Portmeirion is like nowhere else you've ever been. Yet it will remind you of so many places. Its church towers, squares and fountains are reminiscent of Italy, its grand. columned, neo-classical facades straight out of Vienna, and are interspersed with clapboard cottages that might be from Kent. But despite the fact that it was built somewhat haphazardly over a fifty-year period, somehow it all fits together. Said to have been inspired in part by the seaside village of Portofino in northern Italy, it's a fantasy, where nothing is quite as it seems – grand palaces turn out to be small bungalows, windows turn out to be brick walls, facades are exercises in perspective. But it's playful and inventive, the creation of someone fascinated by the possibilities of architecture, and not surprisingly its fanciful incorporation of multiple architectural styles laid the way for the post-modernist architectural movement of the 1980s.

It has fascinated all sorts of celebrities and creative types over the years: Noel Coward wrote Blithe Spirit here, Frank Lloyd Wight was a visitor and admirer, pianist Jools Holland modelled his London house and studio on it; and unsurprisingly it has featured regular as a TV and film backdrop, most famously doubling as 'The Village' in the cult 1960s TV series The Prisoner – and even now is a venue for the blazered enthusiasts of the show to congregate every year.

These days it has reverted to its original function as a private resort, incorporating two hotels (the original Hotel Portmeirion and the slightly smaller Castell  Deudraeth), a number of self-catering cottages, a spa and wedding venue – and of course as an all-round tourist attraction. You could happily spend a day wandering its diminutive streets and squares, admiring the views and stopping off at its shops and restaurants – there are restaurants in both hotels, as well as a couple of cafés and a fab Italian gelateria. And the Portmeirion estate also encompasses the coast and woodlands beyond, through which there are marked paths, so – unlike the hapless number 6 – it's easy to get beyond the confines of the village. You can buy a day pass for £10, and an annual pass for just double that. But really there's no substitute for staying here for at least one night. Once the day-trippers have gone home there's really nowhere like it.