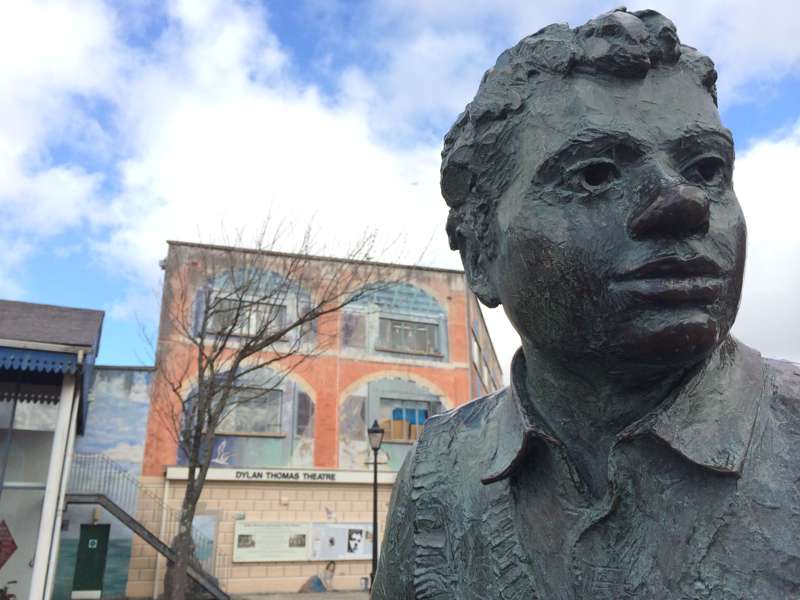 A Weekend in... Swansea

I am sleeping with Dylan Thomas’ ghost. His half-finished whisky sits on the side and his newspaper lies unread on the bed. I cannot decide yet if this creeps me out or not.

Dylan Thomas was born 100 years ago this October in this small semi in Cwmdonkin Drive in Swansea – and tonight I am all set to sleep in his bedroom.

This may sound a little creepy, and at first I must admit I was unsure about spending the night in a house furnished entirely as if it was 1914. But then I arrived to find a bustling tour group making their way through the house and I realised I was being ridiculous – there are no ghosts here, right?

The Dylan Thomas Birthplace is owned by Geoff Haden, who took it on in 2005 in a state of disrepair. Geoff, a Swansea local and huge Dylan Thomas fan, has lovingly restored the house to its 1914 grandeur. Gone is the green corner bath that sat in Dylan’s birth bedroom when this was student digs, in its place a sturdy wooden double bed and a writing desk under the window, where Dylan (everyone refers to him by his first name) sat to write his poetry.

Geoff gives me a tour and lines from Dylan’s poems to fit where we are standing – “ships sailing above rooftops” can be seen from the back bedroom, the garden is indeed “small, but big enough for a washing line, three sparrows and a deckchair.”

I have to confess that I don’t know very much about Dylan and decide I really should fix this if I plan to sleep in his bed. And so I head out to the Dylan Thomas Centre, and its Man and the Myth exhibition. Here I find out that his womanizing and drinking reputation may have been more fiction that fact. I can’t decide if this is disappointing or not.

Dylan’s parents weren’t rich, but they stretched themselves to afford a house in the middle-class Uplands part of the city – something that may sound familiar to modern ears. Uplands has remained fairly well-to-do, and the streets around Dylan’s birthplace are lined with hip new bars and restaurants, especially along Uplands Crescent. Noah’s Yard leaps out at me with its outdoor tables and quirky sign – famous in Swansea as a place for public proposals and shock divorces. Inside it has a cosy interior and regular live jazz. I could have stayed from morning coffee to late night cocktail.

For dinner, though, I had been told to head into town and eat at Grape and Olive, Swansea’s most highly regarded restaurant – literally. My table, 28 stories above the city, is booked for sundown and I enjoy the sea views over scallops and city views with my steak. It is fantastic to get a view of the whole of Swansea and its diminutive size starts to sink in as I tuck into my perfectly cooked rare fillet and raise a glass of Malbec to Wales’ most famous poet.

After dinner I return to Uplands and the Thomas residence. Letting myself in feels naughty – I am after all stealing into a museum after dark – and making tea in Dylan’s kitchen and drinking it in his living room feels like trespassing. Everything has been set up as if the family have just left and so   I find it a bit hard to relax – there is a sense that they might return at any moment.

Of course they don’t, although in the morning I wake up unsure of where I am. But I do have a good night’s sleep. Geoff had even delivered breakfast while I was out the night before and so I make myself bread and jam and more tea in a kitchen I now feel almost at home in. One more night and I would probably have found the courage to sleep in the room set up as Dylan’s – complete with that half-finished whisky and balls of scrawled on paper on the floor. Well, maybe.

There's loads to do in Swansea, and we haven't even started on Mumbles and the Gower yet – for more information and inspiration, visit the Visit Swansea Bay website.