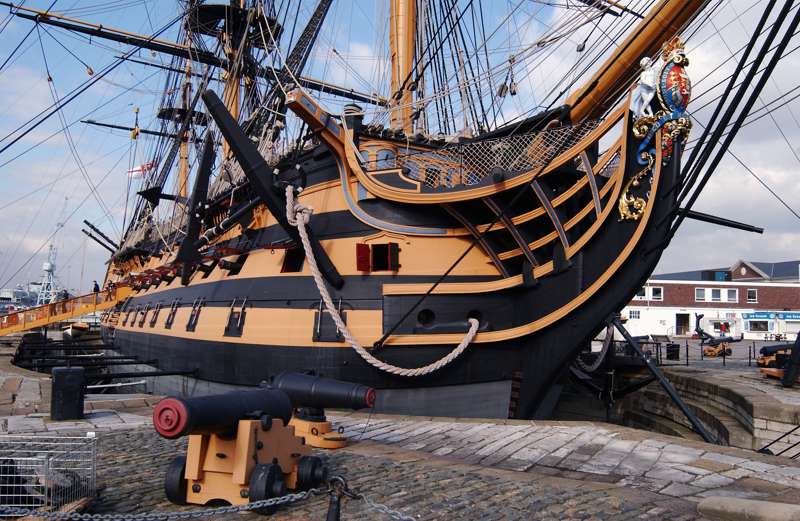 A Weekend in... Portsmouth

Think of a cultural British destination… You probably didn’t think Portsmouth, right? This functional port city on England’s south coast isn’t generally regarded as a cultural hotspot – in fact I knew it more as a shopping destination or the jumping-off point for trips to the Isle of Wight or France. But I have been missing the point. Portsmouth has been one of the UK’s most significant naval ports for centuries – and so of course there is plenty of history here, and consequently plenty to occupy a weekend – or so I told my husband, who I have been badgering to accompany me to Portsmouth for months. Yes, really!

He's a bit of a history buff on the quiet and so was happy to start our tour of the town at Portsmouth Historic Dockyard, home to the new Mary Rose Museum, which opened last year. Now, it's hard to do this justice on one visit – there is just so much of it. Not only the ship itself,  which is perhaps the most mind-blowing historic artefact I have ever seen, but also hundreds of objects that lay with it at the bottom of the Solent for almost 500 years. We linger over tiny dice, shaving kits and longbows, constantly pointing out more and more amazing things to each other and before I know it we have spent two hours there.

Next up, HMS Victory, famous of course for being Nelson’s ship. We duck to pass along the low-ceilinged lower decks and make our way up to the upper deck to stand along with everyone else on the gold plaque that marks where Nelson was struck by that fatal shot. Being able to explore this iconic ship is mind-blowing, but perhaps it would be better with a tour to explain what we were looking at?

With time running short, we switch museums once again, this time for the Royal Naval Museum where the brand new 'Hear My Story' exhibition tells the moving stories of the men and women who make up the Royal Navy. Military history is a subject I find tough but for once I am completely absorbed – listening to descriptions of games played on board and playing with interactive screens that show the position of our fleet today. Closing time is suddenly upon us and in the end staff practically have to beg us to leave. I definitely underestimated how much there was to see here.

We spend the night in Southsea at the Holiday Inn, close to the seafront and the D-Day Museum, where we head first the following day. This is a subject I know only a little about and so there is a lot to learn – from the stories of subterfuge that kept the Germans from knowing the details of the operation to the factors that led to such a large attack being necessary. By the end, as the tales of lives lost and families quite literally blown apart are told, I am almost in tears. This is a museum that has been judged to perfection – there is just the right balance between fact and emotion and with the 70th anniversary this June there has never been a better time to understand it.

To let it sink in we head for lunch at The Belle Isle and dig into tempura prawns, paella and warm brownies. It is the perfect place to recharge and get ready for one last museum.

The Royal Marines Museum gets very little attention (in fact, I had never heard of it) but perhaps that will change this year with the 350th birthday falling in the same year as the 100th anniversary of World War One. We start our visit in the museum’s dedicated World War One gallery, where we learn about the battles of Gallipoli and Zeebrugge and how the Marines played their part, but I am more taken with the exhibition on the training they go through. This gallery tells the story of a Marine’s journey from getting off the train at Lympstone to being awarded the green beret. After trying on a standard issue rucksack and learning about how troops must operate in jungle, desert and arctic conditions I am left with nothing but respect. The final room on our museum tour is the medal room, where numerous Victoria Crosses and hundreds of other medals are on display. We could spend ages here reading the stories behind case after case of medals – there are more here than in the Imperial War Museum.

And this seems to say it all. In a museum I had never even heard of, in a city I had never considered for a weekend break, is a collection larger than that of one of London’s most famous cultural institutions. Time to take another look at Portsmouth perhaps.