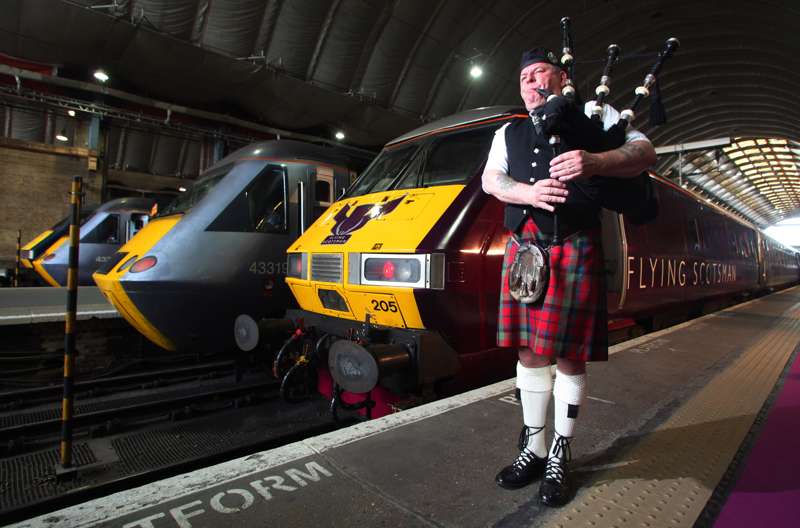 I’m writing this blog from aboard one of the world’s most famous rail journeys. No, not the Orient Express or the Trans Siberian – we’re talking about a train ride right here in the UK. I’m talking, of course, about the legendary Flying Scotsman.

The fact that I’m writing a blog at all aboard is something that would have been quite alien to the first passengers on Britain’s king of trains. They boarded back in 1862 and chugged out of London King Cross in a grand puff of steam, bound for Edinburgh, a whopping 392 miles away, which in those days must have felt like a journey to the other side of the world. Actually the Flying Scotsman was not even called the Flying Scotsman then; instead two trains used to simultaneously depart both Kings Cross in London and Edinburgh Waverley every day at 10am under the moniker ‘Special Scotch Express’. The journey time was a sedate 10½ hours, inclusive of a rather decadent lunch stop at York roughly halfway through the journey – a stop the Flying Scotsman made right up until 1928.  That sojourn at York provides a window into just how luxurious the service was in its historic heyday. It was a veritable palace on wheels, complete with a plush restaurant and even a hairdresser. Taking the train was not something you did to get to work, more as the start or end of a great travel adventure.

The journey-time was eventually cut to as little as four and a half hours, but by the time the the network was broken up in the 1990s much of the romance of the journey had been lost. Privatisation heralded turbulent times. The first operators – GNER – tried to resurrect the spirit of the old Flying Scotsman with proper restaurant cars and complimentary tea, coffee and biscuits. However, they ran into financial difficulties and the route was taken over by National Express, who axed the dining car and service before they too ran into trouble.

In 2009 the government stepped in to take over the route and it's now run by East Coast Trains, under whom it seems to have recaptured some of its old glories. Only some trains are actually called the Flying Scotsman now, but almost all follow the route of the original train, and it's a nice feeling to be boarding this historic train in London, especially as for once I'm in first class. We'd barely left the platform and I'd not even fired up my laptop before I’d been furnished with my first coffee (served in a proper cup) and a newspaper. I could get used to this!

We quickly picked up speed as we zoomed through suburban London stations I soon could not even read the name of heading towards the train’s maximum permitted speed of 125mph. Arsenal’s Emirates station flashed by on the right and then the graceful outline of Alexandra Palace loomed to the left as we started to shake off the tentacles of Europe’s largest city.

We continued to bash north as I plug my laptop in and use the complimentary wifi to research the history of this great rail route. Breakfast arrives, a proper cooked affair or continental option. Later I also enjoy lunch, all part of a First Class service that includes free soft drinks and alcohol. At York I savour a glass of Sauvignon Blanc and raise a toast to the original passengers, who stopped for their decadent lunches here.

Next comes the delightful form of Durham. Bill Bryson once remarked how he was so struck by the sight of the cathedral and castle from the train that he wondered why nobody had foisted car keys on him and forced him to visit Durham before. I’m with Bryson – Durham does look bewitching from the East Coast Mainline.

We are heading into border country after we clear Newcastle – itself a scene of a dramatic crossing over the Tyne. Perhaps the most spectacular section of track comes as we approach the old border between Scotland and England at North Berwick – around the epic arch viaduct that takes us between the two sides of the town. Shortly after we cross the border and bullet across the most attractive part of the journey yet, with the rugged sweep of the North Sea and its cliffs and beaches to our right and the rolling hills of the Borders then East Lothian on our left. All too soon we ease into Edinburgh Waverley just as I finish this blog and my last cup of coffee, four and half hours after leaving London Kings Cross.

She may no longer be under steam or stop for lunch at York, but I’d thoroughly recommend a trip on today’s impressive descendant of the legendary Flying Scotsman. My next stop? Checking into The Balmoral Hotel, of course, not only perhaps Edinburgh’s finest hotel, but one of Europe’s great railway hotels – once a stalwart of Flying Scotsman passengers.