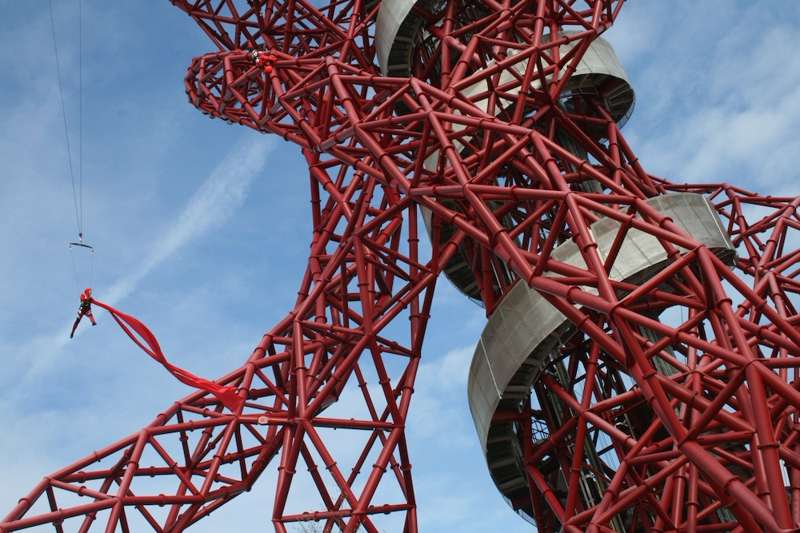 I’ve always loved getting up high, and in any new city always have to climb the tallest building or tackle the nearest viewpoint.

So I’ve been very excited to see London get several new lofty viewpoints recently. I’ve walked across the top of the O2 and ascended the Shard, but today I was lucky enough to be one of the first people to climb the revamped ArcelorMittal Orbit at the Queen Elizabeth Olympic Park – and I think it trumps the lot.

The trouble with most tall structures with viewing platforms is that you can never see the building you’re actually standing in. But from the Orbit you can take in a vast sweep from south to north – the O2, the Gherkin, the Shard – and the geography of the capital starts to make sense. For a little extra help you can use one of a series of mounted touchscreens, which function like large iPads to zoom in, switch to a night view or get more information on specific buildings. You can see for up to 20 miles here on a clear day and I could see the BT Tower, the cable car across the Thames and even the arch of Wembley. I could also see myself – in the two huge concave mirrors Anish Kapoor has designed to bring the sky in. I wasn’t the only one to snap a selfie here!

But perhaps the best thing about the Orbit is the park that surrounds it. From ground level I was whisked to a height of 84 metres in just 34 seconds by the super-fast lifts and suddenly was looking down on the archaeology of London’s proudest summer. I could look across to the Aquatics Centre and for the first time properly appreciate Zaha Hadid’s beautifully curved design – you can’t see it in its entirety from anywhere else. In the distance I could see the velodrome where Sir Chris Hoy made Olympic history with his 6th gold medal, and on the tower’s other side look down into the Olympic Stadium itself. Memories of cacophonous crowds rushed back to me (I roared until I was hoarse seeing David Weir race to a gold medal here in 2012), and I watched in fascination for several minutes as construction continued beneath my feet, adapting it into the new home of West Ham United FC.

The stadium is closed until next year but there is plenty else to see in the park. Just behind the Orbit is a series of outdoor “rooms”, designed to inspire creativity, and on a warm spring day there are hundreds of families playing here. There’s a music maze, sandpits and fountains and all manner of climbing frames and outdoor gym equipment – you can even try to jump the jaw-dropping distance Greg Rutherford leaped to win his gold medal. The Aquatics Centre is now a community swimming pool and the velodrome is part of the Lee Valley VeloPark where you can try track cycling, road racing, BMX and mountain biking.

I was mesmerized by the view from the Orbit, but even better was the walk back down. Anish Kapoor has created the only sculpture in the UK that you can experience from both inside and out and the spiral staircase around its exterior is strung with “soundscapes” – noises of everything from Wembley Stadium to Brick Lane. I hardly noticed the 455 steps – and am already keen to get back up there, especially if in future it’s open after dark.

The ArcelorMittal Orbit is open 10am-6pm daily. Tickets cost £15 for adults and £7 for children. Book online at  or buy in person on the day – the tower has been designed to take 500 people an hour so is rarely sold out.