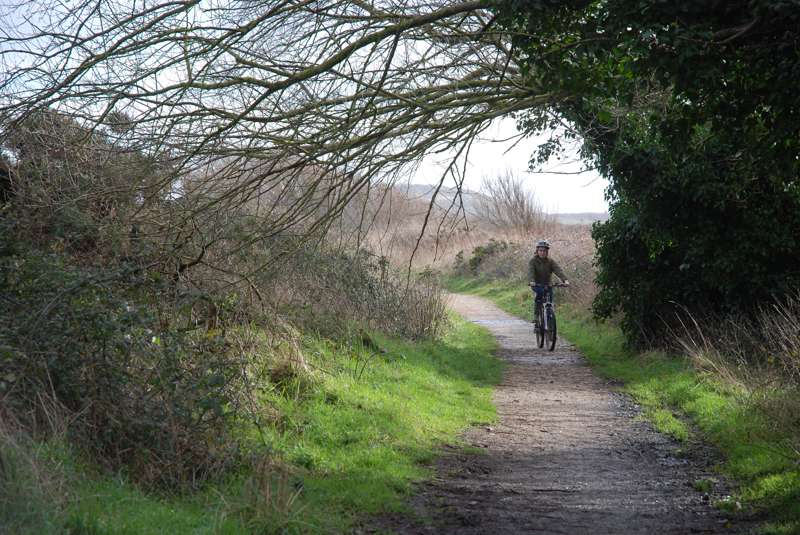 It’s a well-known fact that the New Forest is liberally scattered with roaming ponies, gnarled trees and the odd foraging pig. Less known is its network of excellent cycling tracks, which, with a bit of careful planning, you can link up for a full day’s cycling via a series of some of the Forest’s best pubs. The route we've chosen gives a good 40 miles of idyllic, reasonably easy cycling, through beautiful countryside on mainly off-road tracks – and with eight pubs to choose from on the way!

My starting-point was Christchurch railway station, though you could easily start from the cycle hire facilities of Burley. There’s a cycle route along the Christchurch bypass, but you quickly leave the traffic behind by taking the bumpy Ambury Lane, heading left under the railway bridge and across the hidden delights of Burton Common – a kind of New Forest in miniature. You then wend your way along rural back lanes – through the ford of the appropriately named Waterditch Road –  to the slow climb along the leafy Lyndhurst Road (clocking film director Ken Russell's place on the way). Take a left along Forest Road and you’ll be crossing one of the many former airfields that were used in the New Forest during the Second World War. There’s a memorial to the pilots just off the road here, while the adjacent Homsley campsite partly sits on sections of the concrete runway.

Head right onto Burley Road and you cruise downhill through archetypal New Forest terrain of rolling open heathland dotted with grazing ponies. By now you may feel like a break and luckily you soon hit Burley, which has a choice of three good pubs: the White Buck, which has been recently refurbished and has an excellent garden, but we opt for the Burley Inn: no detour needed, good beer and a warming fire.

Head out of Burley, keeping another pub – the Queen’s Head – on your left, and after a mile or two you’ll see a wide forest track through a gate on your left. This is perfect for cycling, despite the steady incline that continues through the trees for several miles. You may spot deer along the way, before stopping at Bolderwood near the top of the hill where you’ll amost certainly see some of the four-legged beasties close to the deer feeding station.

You rejoin the road at the Canadian War Memorial and head left along a minor road that passes under the busy A31. Shortly after this, look for another forest track on your right which cuts a corner to the road to Fritham. This northern section of the New Forest feels wilder, with fewer trees; even the ponies seem smaller and stockier. The final climb to Fritham warrants a stop at one of the Forest’s finest pubs, the Royal Oak – a tiny thatched building with real ales, giant ploughman’s and a hilltop garden with superb views.

Suitably refreshed, continue onwards following the 'Cycle track to Frogham' sign – a blast of a ride down through dense chestnut and oak woods before a devil of a climb up to a high ridge that offers dazzling views across the most empty part of the New Forest. Next stop, the Forester's Arms in Frogham, another classic rural hideaway that has recently been renovated.

From here it is mostly downhill and the pubs keep on coming. Within a few miles you hit the idyllic village of North Gorley, where the Royal Oak  serves great food. Then it’s wet feet time via back lanes with fords to the Alice Lisle, which has a lovely garden overlooking a lake. Head back through Poulner, a suburb of Ringwood, and find the quiet Crow Lane to Ripley. You can cut down from here to cross the swollen Avon river, and it’s a couple of miles to the Avon Causeway pub, a former railway station with an old train carriage in the garden. From here you can pick up the old railway track opposite, now a bumpy cycle route emerging at the northern stretches of Christchurch. You can then wend your way along various paths adjacent to the Avon river, emerging close to Christchurch station where you began.