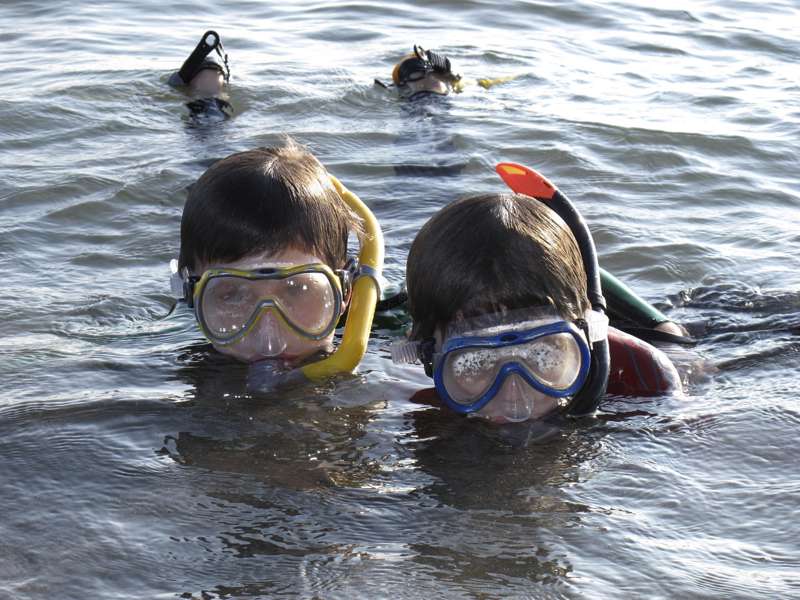 When I suggested a snorkelling and kayaking trip, my two teenage children were excited.

“Where to? The Red Sea, Barbados, the Great Barrier Reef?” “Not exactly,” I said, “Try Dorset”.

In fact, the soft white sands at Studland Bay could pass for the Caribbean on a sunny day, and we were lucky enough to arrive on a calm, bright morning – perfect conditions for snorkelling.  Our instructor Dan was brilliant – reassuring and safety-conscious enough to put a nervous mother’s mind at rest, but with a suitably gung-ho attitude that had the kids really enthused. Once we were kitted out with our full winter wetsuits (this is Britain, after all), had tried our masks for size and grabbed our paddles, we headed down to the waterside of Middle Beach to choose our kayaks. I shared a double one with my daughter – I was sitting at the back so didn’t realise she was doing most of the paddling!

We set off along the coast to neighbouring South Beach, where we landed our kayaks next to a fallen World War II pillbox. In fact, we were right below Fort Henry, a 27-metre clifftop bunker used by King George VI, Churchill and his generals to monitor the progress of their troops as they practised for the D-Day landings here. However, Dan assured us we were more likely to encounter spider crabs, grey mullet and pipe fish than pipe bombs or rifles.

If you have not snorkelled before it can be a strange feeling. You need to get over the dubious sensation of sticking your face under water, and for a time you find yourself breathing unnaturally fast. Once the initial fear has gone, however, it becomes a surprisingly relaxing sensation: you float, semi-weightless, the outside world muffled by a watery hum, and confronted by an eerie but beautiful world of darting little fish and a dazzling array of coloured seaweeds swaying rhythmically with the ebb and flow of the waves. Studland Bay is definitely not the Caribbean when it comes to marine life. But it is unique in its way, home to rare seagrass meadows, the only truly marine flowering plants, and the UK’s only known breeding site for spiny and short-nosed seahorses. You would be lucky to spot any of these shy creatures while snorkelling, but it has been known.

Once Dan was happy that we were vaguely competent we kayaked across the bay to the base of Old Harry Rocks, a spectacular series of chalk stacks rising sheer out of the sea, dramatically tunnelled with arches and caves. We paddled through a sea arch and moored our kayaks on a small stony beach, only accessible by boat, surprising little rock pipits which flitted off the beach. Reflected against the white chalk cliffs, the water here was clear and blue. The snorkelling was superb, and we were able to swim through more arches to peer below the waterline at rock faces dotted with pretty red anemones and tiny fish, while the children leapt off rocks above us into the deep clear water.

Snorkelling and kayaking are surprising tiring, yet the bay is so attractive it did not seem like hard work. We watched oyster catchers circling around the cliffs, and, further out at sea, giant ferries heading off to France from Poole harbour, as we steered back to the beach between the moored yachts that anchor here for the night. The largest creature I saw was a sea bass, but it's not unusual to see dolphins and even basking sharks, and  at the end of the day it really did not matter. It's not the Caribbean, but we had seen a magical world above and below the waves.

Studland Sea School is based on Middle Beach, Studland, Dorset  and offers kayak and snorkelling tours for £40 per person for a half-day, or £70 a day. They also offer kayak fishing tours, coasteering at nearby Dancing Ledge, and they rent out kayaks.