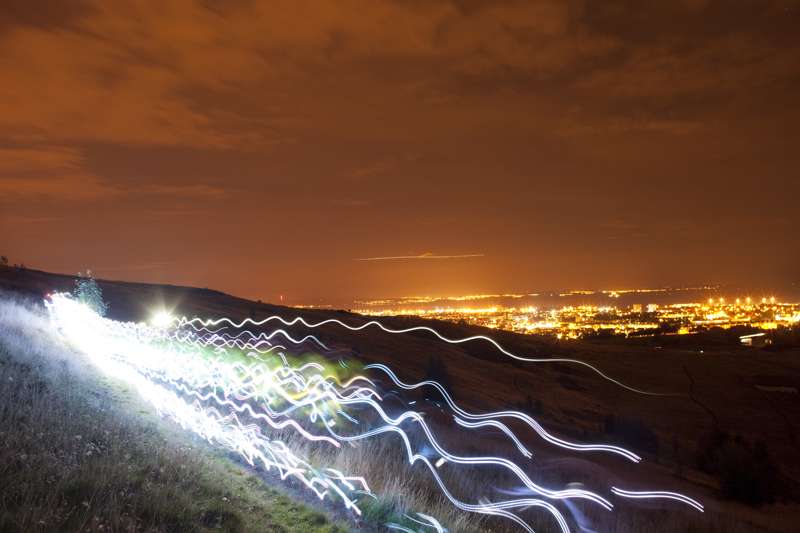 Anyone who’s spent any time at the Edinburgh Festival will know that two things are a given here in the merry month of August.

1. Any and every space which can possibly be pressed into service as a venue will be seized upon. You haven’t really ‘done the festival’ until you’ve attended a show in a public toilet, carpet shop or had dinner at the top of a 250ft crane.

2. The second is audience participation, as anyone who’s sat through the legendary bearpit that is Late N Live will surely testify.

This year a seriously impressive public art project combines both of these elements with, well literally thousands of other elements…

Speed of Light is an ambitious event, a collaborative venture between the Edinburgh International Festival and the London 2012 Festival, which will see one of Edinburgh’s truly iconic landmarks, Arthur's Seat, illuminated by hundreds of nocturnal runners and walkers brandishing light staffs and specially designed light suits for 23 nights from 9 August onwards. The end result promises to be like a cross between the movie Tron and the 2012 Olympic Opening Ceremony – audience participation on a grand scale, with 200 volunteer runners and 600 walkers, guided by a team of experts who have been training since January. The best way to experience it is to register to join in and become part of the work yourself, but you can also buy tickets as a spectator.

The bright sparks behind the project are environmental art charity NVA. As you might expect, they have ‘some previous’, having masterminded similar escapades on Skye, a beautiful Chinese lantern festival at the Edinburgh Botanical Gardens and various other lighting and landscape projects across Scotland. NVA's Creative Director, Angus Farquhar, has long been inspired to do something with Arthur’s Seat.

‘I grew up in Edinburgh and to almost all people who have lived there for some time, Arthur’s Seat has a special place in their hearts or minds.’ Arthur’s Seat is a popular draw for local runners and walkers: while watching them, the geography of the place produced optical illusions which intrigued Angus: “The strange angles that the path lines create in the sunken bowl of Salisbury Crags mean that you lose clarity of where they are heading and what direction even means in this setting. It looked like runners were actually doing the impossible of moving into and out of the hill, giving the movement an almost hallucinatory quality.’

Far out eh? Now just imagine watching it when a sea of dazzling, different coloured lights move around the crags in a choreographed dance in Auld Reekie’s pitch-black night. The runners have already been allocated, but if you want to take part you can still sign up as a reserve or support runner  at the Speed of Light website, and there are plenty of tickets at the festival's official website. As for getting to Edinburgh, try www.fly.co.uk for the very best current flight deals.