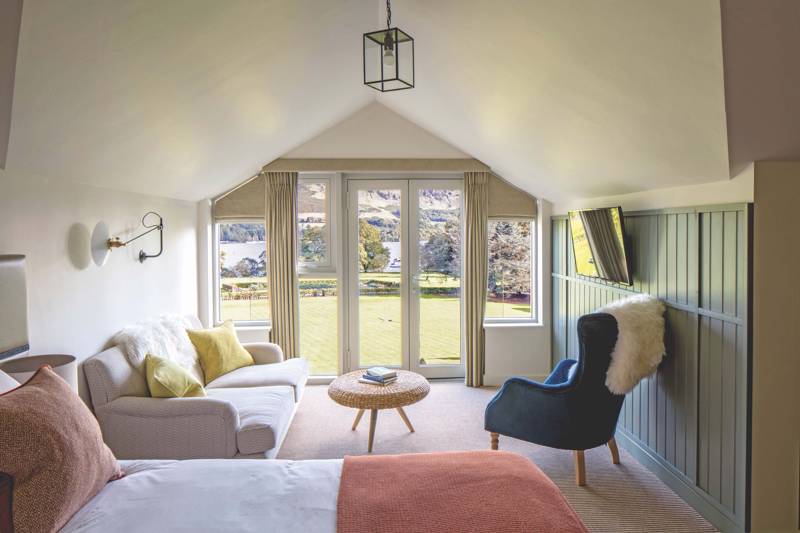 The UK's fifteen National Parks are all unique, ranging from green spaces with mountainous backdrops to parkland along stunning coastlines. Why not head out and explore them... and come the end of the day, book into one of the fabulous places to stay that are dotted in an around these protected areas – read on for some of our favourites.

A truly special bed and breakfast in a beautifully restored mill building in the heart of the Yorkshire Dales, the three rooms at this intimate B&B are fashioned from an eighteenth-century watermill on the gushing riverside in Bainbridge, in the heart of Wensleydale. There's no mistaking the building's heritage – owners Neil and Jane have restored the lot to working order, so the grindstones and cogs form a dramatic backdrop in the eye-popping guest lounge, while the wheel itself lies underneath the dining room (a tour by Neil, who did the work himself, is very much part of the experience).

Occupying its own secluded grounds, this cosy country house is just the place to come back to after a spot of yomping across the wilds of Dartmoor. A large and elegant Georgian house that has been a hotel since the 1970s, it was extensively refurbished a few years ago and now boasts nine guest bedrooms, each named after Lewis Carroll characters. Awarded 'boutique hotel of the year' in 2017, they more than live up to their billing, with king-size beds and luxurious bathrooms with underfloor heating.

This beautiful boutique B&B is situated on the edge of the Peak District in the heart of the Derbyshire Dales, looking down onto the Ecclesbourne Valley. The elegant late-18th-century farmhouse lies at the centre of a 154-acre working farm on the Chatsworth Estate at Shottle, and although it's easy to reach, it's a very rural place to stay, with levels of luxury that compare favourably to a top-end hotel but in a gloriously informal setting. We also love their sister businesses Dannah Cottages.

Sarah Copley's Tinkersley Cottage was one of our favourite Derbyshire B&Bs, so we were sad when she decided to up sticks and move, but delighted that she decided not only to stay reasonably local but also opened another B&B – the Manor House just outside Matlock, on the edge of the Peak District National Park, roughly between Ashbourne and Bakewell. It picks up where Sarah left off, with three beautiful bedrooms, in a Grade II-listed greystone Georgian building, where breakfasts are sumptuous, and on arrival you're served tea and cake.

An eye-catching Victorian Gothic-style castle situated on 84 acres of National Trust parkland next to the river Manifold, with stunning views of Ilam? No, we're not talking about a top-flight country house hotel, but actually one of the YHA's most historic properties, a fabulous 17th-century manor house that enjoys a unique location just outside the picturesque village of Ilam in Derbyshire.

Here guests will find a pub with a collection of contemporary rooms, all of which are very comfortable, up-to-date and well-equipped, plus the spot is also part of the excellent Waveney River Centre, a camping, glamping and self-catering site that occupies a beautiful, almost secret spot by the river that is home to all sorts of activities. In short, there are any number of reasons to come here, and it's a fabulous place to enjoy the more untouched southeastern corner of the Broads National Park.

This old stone rectory, now home to a small boutique hotel, would be a lovely place to stay wherever it was located, but its location in Dolgellau, at the foot of the Cader Idris mountain and not far from the sea, makes it extra-special. Its six bedrooms are thoughtfully decorated in a manner that's designed to be both in keeping with the Victorian property but artfully modern too, and all decorated in a different style.

Another Place, The Lake

If you’re going to go to the trouble of updating a country house hotel in the Lake District – where there’s lots of competition – you need to do it right, so kudos to Another Place, The Lake, handsomely sited on the shores of Ullswater. It’s stylish yet unstuffy, and properly family friendly, but there are also romantic lake views, convivial public spaces and a great restaurant, which makes it a fabulous grown-up retreat too, handy for exploring the less-visited northern Lakes and Eden Valley.

The Angel at Hetton

As one of the Dales' most celebrated gourmet-dining destinations, and perhaps the North of England's original gastropub, the Angel at Hetton has long been a destination for both good food and comfy accommodation. But this legendary North Yorkshire Dales establishment has been breaking new ground of late, with the two Michelin-starred chef Michael Wignall taking over the business in 2018 as chef-patron.

'The simple things in life done well' is the motto of this rather special inn – and we reckon it's perfectly suited to this gastropub with rooms, situated on the edge of the Brecon Beacons National Park. There are seven cosy rooms above a restaurant that is one of the best in the region, it's also a proper pub, with all that that implies, serving well-priced, well-kept local ales – a bit of a haven for local drinkers and a welcoming place for everyone else, with a roaring fire in winter. And dogs and children are very definitely welcomed.