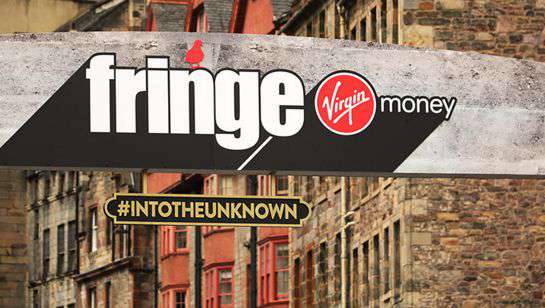 Edinburgh Fringe 2018 - a handful of shows to tickle your tastebuds

Rugged, intense and eye-catching, Edinburgh is one of Europe's most striking capital cities. Gathered around its craggy central castle, the medieval core is a breathtaking warren of cobbled streets, towering spires, turbulent history and one or two striking modern buildings. Only barely less central are museums and galleries of international importance, wild grassy moorland, dramatic viewpoints, huge Grecian edifices and effortlessly elegant Georgian streets. It’s a handsome, memorable city, despite being home to less than half-a-million people, with a cultured, contemporary vibe that peaks during August's annual Festival. Now in full swing, the spotlight is firmly fixed on Scotland's capital and the Fringe right now. Here are just a small selection of shows showing throughout the month....

If you've ever been engaged at 19 or have parking tickets worth a house deposit, then, like Tash, you've probably not mastered "Adulting". Known for her ballsy voice and witty repartee, this award-winning cabaret artist Tash York explains why growing up is hard.

Soar with Sam on his thrilling migration North: journey through wondrous landscapes, meet the creatures that inhabit them, and see the impact of pollution and climate change. A poignant, heart-warming and entertaining new play for children and families about the beauty of nature and our need to protect it, brought to life through music, dance and puppetry.

Russell Howard, Miranda Hart, Tim Minchin... what have they got in common? They all once received one-star reviews. Now in it's sixth glorious year, this show presents a fresh daily line-up of one-star wonders who've proved their reviewers wrong. Hosted by the wonderfully funny Nigel Lovell.

The sell-out comedy tap-dance hit is back! Addictive, eccentric performances combine tap, circus and comedy for an unforgettable toe-tapping experience you have never seen before. The 2014 winner of C's Got Talent and nominee of the Asian Arts Award.

Taste and learn all about Arbikie's family of world award-winning field-to-bottle gins from the Arbikie Ambassador team. Arbikie is both the current World's Best Martini champion and also Scottish Gin Distillery of the Year, a significant award when over 70% of UK Gin is distilled in Scotland. Sample their delicious gins distilled from scratch on the family farm. An afternoon to savour!

The renowned Edinburgh International Exhibition of Photography, now in its 156th year, showcases the very best of modern photography from entrants worldwide. Over 2000 prints are submitted by over 300 photographers from about 40 countries. An international panel of selectors choose the 200 which comprise the exhibition.

Using nothing but their voices and innovative live looping techniques, genre-bending FreePlay takes you from the concert halls of Europe to the jazz clubs of Manhattan, the temples of India and back to their native Toronto... all without leaving your seat. The duo effortlessly crosses musical boundaries to create an a cappella concert of endless variety. Imagine Simon & Garfunkel crossed with a Bach two-part invention... or an acrobatic jazz melody combined with ancient Indian beats... or an eight-part vocal arrangement created by two singers...

Musicals and Opera – A Fair Tale About a Fairy Trade

A new musical adaptation of the classic tale of Cinderella, by Charles Perrault. However, in this modern-day version, Cinderella is not only a slave at home, but in a twist of events she ends up being trafficked and becomes a sex slave. Shining a light on one of the fastest growing criminal industries in the world, the musical is comprised of real-life stories of trafficked victims and it aims at educating the audiences in the hopes of reducing the risk of potential exploiting in the future.

Join former 80s pop star turned vicar and broadcaster Reverend Richard Coles – co-host of BBC Radio 4's Saturday Live and BBC One's The Big Painting Challenge, star of Strictly Come Dancing 2017 and panelist on Have I Got News for You, QI and Would I Lie to You? – for an hour of candid chat and confessions with special guests and celebrity friends.

There's been a murder. Race against time to solve it or you might be next! Investigate the Museum of Secrets in this immersive escape game. An Agent November Mystery, now bigger and better than before. A 2017 Fringe smash hit.

The Virgin Money Street Events take place each and every day of the festival with hundreds of free, family-friendly shows. Most of the Street Events acts are scheduled by a daily draw at 10:00am each morning. Get a taste of Virgin Money Street Events with the regular showcases at West Parliament Square Spectacular (daily at 13:15 and 20:15) and Fringe Sunday Comedy on the Mercat Stage (every Sunday at 13:00).
For more info, dates and tickets, see the Fringe website.
Fancy making a weekend of it? 94DR is a sharply designed guesthouse with super friendly hosts, whilst Brooks Hotel Edinburgh is a comfortable yet affordable hotel with the odd high-end flourish.