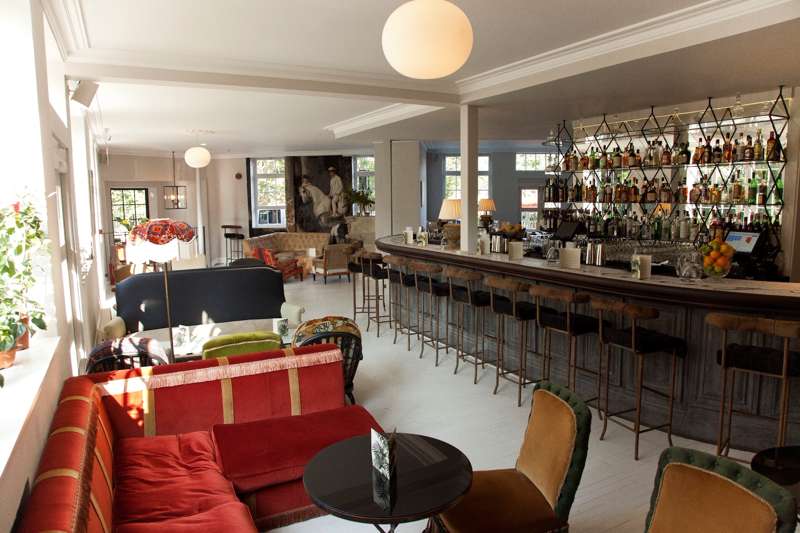 This new Bourne & Hollingsworth looks pretty  cool. It's like the French Caribbean in the middle of Clerkenwell, with slatted shutters masking the private dining area, palisade ceiling fans, and flora and fauna adorned furniture, beautifully cluttering a space that feels relaxed and romantic yet elegant and polished at the same time.

We began the evening at the giant marble bar in the main room. As you might elect  the cocktails were excellent, or so I'm told by Johnny, my date for the night (he drank three). They even obliged by making me a rather delicious virgin concoction with cucumber, lime, and some heat. We ate triple fried parsnips chips (awesome) from the bar snacks menu, which is tempting enough to keep you propping it up.

But with very little coaxing, we were led through to the conservatory dining room, a secret garden filled with hanging plants, armchairs from nearby House of Hackney, and foliage climbing the white walls.The place is a visual feast – and the food was pretty special too.

To start, we had roasted baby artichokes, poached egg, spinach and parmesan (£9) which was perfect; we were divided on the marinaded squid with potato and fennel salad (£9): the squid was slightly curried, which I'm not sure quite worked, but the bed of buttery potatoes and fennel was totally scrummy.

For mains we shared the lamb cannon with a minted (cheesy) crust and ratatouille (£20) – insanely good, the lamb cooked perfectly pink – and scallops with parsnip puree and hazelnut gravy (£23): a simple but unusual dish that worked much better than we had feared.

Pudding was chocolate genache with a ginger biscuit and vanilla ice-cream (£6) and lime and verdi bella olive cheesecake (£5). I hate people who say things are too rich. Pudding could never be too rich (and I will never be too thin), and this didn't disappoint. It was borderline rich, in the best possible way.  The lime and olive cheesecake wasn't far off either.

We finished with an aperitif and espressos at the bar, chatting away to the (gorgeous, naturally) French bartenders, before drifting off happily into the night.

Bourne and Hollingsworth have nailed it. The staff were friendly and attentive whilst making you feel unobtrusively indulged; the setting is dreamy, and overall the food was pretty damn good.  Not cheap, but a good choice if you're looking for a place for a special night out.