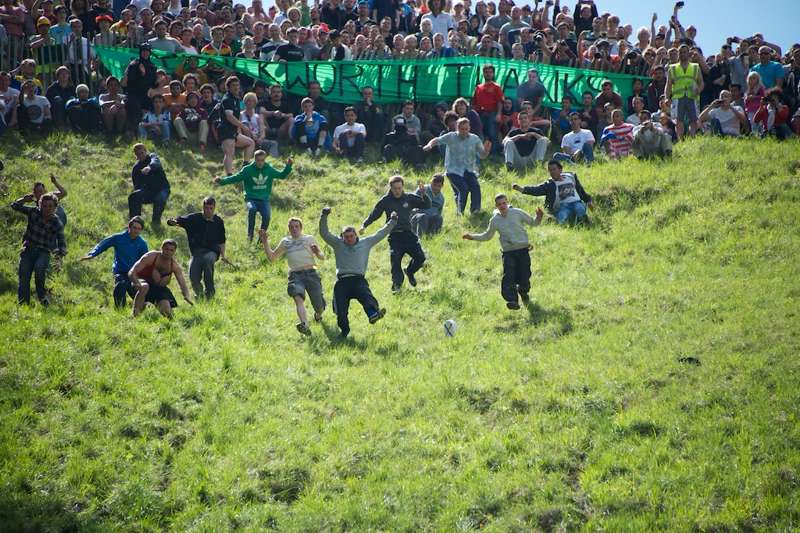 Get ready to tumble...

Britain has a surprising number of annual events that err on the wackier side of celebration, and one that gets more media attention than most is the Cheese Rolling at Cooper's Hill in the Gloucestershire village of Brockworth, which takes places this year on Monday 30 May.

In a nutshell, several large Gloucestershire cheeses are rolled down a hill, and the locals throw themselves trying to catch each one until they are proclaimed the winner. It’s not a knock-out competition (unless you count concussion), but in fact five separate races for men and for women, all of whom hurtle down to the waiting arms of local rugby club members whose job it is to catch racers before they end up head long in a prickly hawthorn bush.

And their prize? To keep the cheese, of course.

The event hasn't been without controversy over recent years, and it isn't entirely clear why until you see quite how steep is the slope down which the cheeses are rolled. The authorities actually deem it a safety hazard – there are usually one or two casualties every year – and they would prefer spectator cordons, ticket sales and plenty of police in attendance. The locals, however, like it just as it is, and so far they're winning apart from one crucial respect – the cheese is now sadly made of foam and wood since the local cheesemakers were warned if anyone was seriously injured they would be liable for damages.

All this aside, it’s a fun day out for locals and visitors alike, attracting an nternational pool of participants, and plenty of Australian and Japanese TV crews in attendance. Indeed one of the 2013 races was won by American Kenny Rackers, whose life ambition had been to win the competition (indeed he spent his life savings getting here).

If you want to come and watch (or even participate) it’s worth following a few simple guidelines.

Arrive a good few hours before the noon start and be prepared to park your car quite a way from the hill itself and walk through the woodland to the site. Bring a picnic and any other supplies you might need, as there’s little to be had in the area, pick your spot and stay put. Either side of the hill is good: the bottom is cleared of people before each race to avoid unwitting collisions between spectators and racer. If you want to soak up the atmosphere of the event without being in the thick of it, you can position yourself in the field on the other side of the buildings.

Diana Jarvis is a freelance travel and outdoors photographer. You can see more of her work at Diana Jarvis Photography