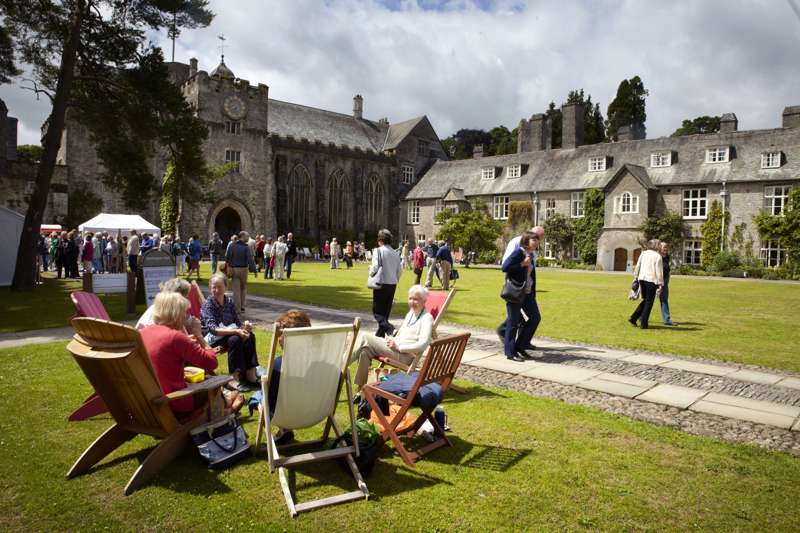 This July the gorgeous Dartington Hall estate in Devon plays host to the 21st Ways with Words festival, an annual literary event which has far outgrown its Devon roots and now takes place in Cumbria, Southwold and as of this year in London’s Holland Park. However, Dartington is the original home of the festival, and for me remains the best event. I try to go each year, and what I’ve always loved about it is its calm and relaxed holiday atmosphere. Unsurprisingly it's at its best when the sun is shining. People discuss stuff they’ve seen lounging on deckchairs between events, or at the on-site  pub, the White Hart, every evening. There are open-air book signings, little kiosks selling homemade and organic goodies, and you can just bring a blanket and sprawl on the grass between talks.

There’s usually a great sense of community too, because many people, including the writers, stay on site. Writers are not segregated in the way they often are at other literary festivals, so you’re quite likely to run into speakers in the pub or on the lawn – great if you’ve got a burning question you didn’t get to ask in the event or if you just want to connect.

I can’t think of a more inspiring venue. The largest events take place in the impressive Great Hall, which dates back to medieval times, while smaller, more intimate talks, interviews and screenings happen in the converted Barn, where you can also pick up snacks at the Roundhouse café-bar. If you’ve time spare and want to get out and about, the estate has a thousand acres of farm and parkland to explore, as well as an art gallery and mature gardens.

The festival interprets the idea of ‘words’ in its broadest sense, and goes far beyond a purely literary remit, with a sparky mix of big names and lesser-known folk speaking on all kinds of interesting topics. This year it’s great to see local authors like poet Matt Harvey getting a look in alongside bigshots like Anita Desai and actor Timothy Spall. Julian Clary is talking about his new novel Briefs Encountered with Joan Bakewell, and I'm also hoping to catch the poet Blake Morrison, who’s going to be dwelling on witches, and Jung Chang, who’ll be talking to journalist Rosie Boycott 21 years after the publication of her Wild Swans. I also fancy trying a workshop on novel writing with Rebecca Gethin, and a comedy night with Jeremy Hardy.

Get thee quickly to the booking office though! Tickets only went on sale May 22 but several events have already sold out: the Telegraph Ways With Words Festival at Dartington Hall, July 6–16, 2012.