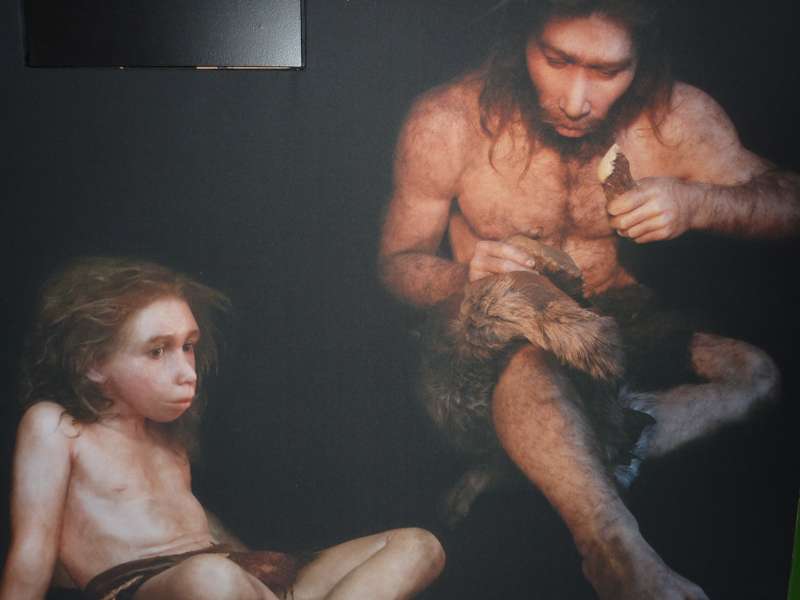 One Million Years of the Human Story

It may not have the wow factor of the dinosaur gallery, but this new exhibition at London’s Natural History Museum deserves just as much attention for the fascinating tale it tells of the four successive human species to have made Britain their home over the last million years. It’s a gripping story, set against a backdrop of wild, inhospitable terrain inhabited by a cast of even wilder beasts – lions, mammoth, rhino and hyenas. The exhibition focuses on the extraordinary wealth of archeological material that Britain’s marshes, estuaries, caves and coasts have yielded over the decades. The razor-sharp flint tools, hefty hand axes, spears, extinct giant-beaver bones, and perfectly preserved, ancient pine cones are from such familiar places as Norfolk, Kent and Sussex; even the soil beneath Trafalgar Square revealed a 125 million-year-old hippo canine.

This all helps to connect us to our human forbears, in whose footsteps we now walk: the opening of the exhibition was timed with media coverage of a ground-breaking discovery of footprints dating back to 900,000 years ago on Happisburgh beach in Norfolk. They’re the oldest evidence of human habitation in Britain, in fact the oldest outside Africa. Video footage of the footprints – now covered again by the sea and sand – makes it easy to picture this group of adults paddling about in the estuary mud of what was then the ancient course of the River Thames. It’s gems like this, and the teeth of a Neanderthal child found in Sussex, and – from Wales – possible evidence of cannibalism in the form of scalped human skulls fashioned into bowls, that make this exhibition so engaging. There’s a great section highlighting recent scientific developments, like the fact that DNA analysis has revealed that, today, some 2% of people outside of Africa have Neanderthal DNA – a fact used to entertaining effect in a section that investigates the genetic ancestry of a few of the museum’s more famous friends: the comedian Bill Bailey (a suitably hairy choice) and broadcaster Clive Anderson among them.

But the real stars of the show are the two specially commissioned models – one of a male Neanderthal and one of a male Homo sapiens – that leave nothing to the imagination. In a deliberate rejection of the clichéd pose of ape-man with spear, the Dutch artists, Alfons and Adrie Jennis, have made their models hairier and craggier versions of ourselves. Neanderthal Ned (as the public have apparently nicknamed him) is the exhibition’s poster boy. His rugged features speak of the harsh life of a Neanderthal hunter (he is only in his twenties after all), and his inquisitive, thoughtful expression invites us to ponder – as does the whole of this superb exhibition – our own place in the human story.