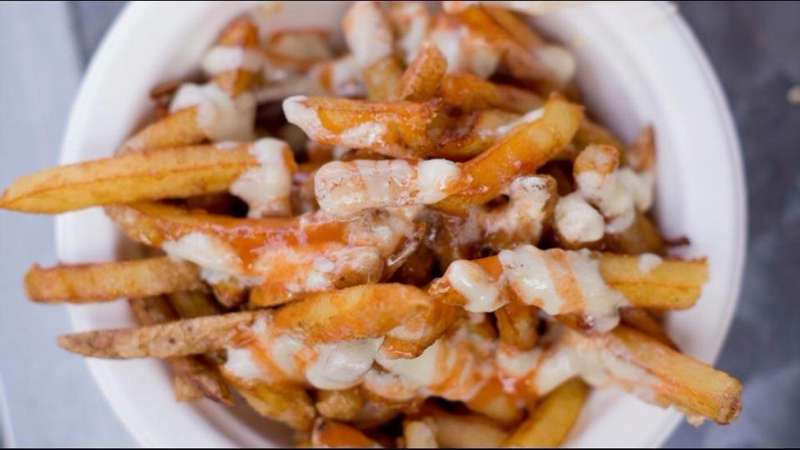 The days are finally getting longer, warmer and, if we're lucky, a little sunnier. So, why sit in a stuffy restaurant when you can people-watch from a park bench? Let's face it, fresh food is always best enjoyed in the fresh air, and with street food there's no middle man between the cook and the customer: the food is freshly made before your very eyes, and the chef usually specialises in the one thing he or she does best. London is scattered with different types of street food, and, if you know where to go, you can find lunch twice as good as any restaurant but at half the price. Stick a paper under your arm, head for the streets and sample some of our London street food favourites.

Based in Old Street, though often on the move, Big Apple have been taking London by storm with their American style hot dogs for a couple of years now. Don't be fooled by those supermarket wieners that taste of water and cardboard, these dogs are the real deal, full of flavour and 98% meat. At £4 a (sizeable) dog, they're not a bad deal either, and you more than get your money's worth by piling your roll high with onions and BBQ sauce. The meat is free-range, the buns locally baked and all the dogs are gluten-free.

Amy and Kristian are the stars behind the pan-Asian meals that roll out of Dosa Deli every day. Made redundant a few years ago, the pair decided to draw on their travelling experiences to create a pop-up stall selling fresh Asian-inspired dishes. Though not vegetarian themselves, their specialty is veggie and gluten-free dishes that aim to show you don't need mountains of meat to keep you salivating – and their menu is always changing to keep it fresh and seasonal. Look out for the pink top of their pop-up gazebo!

Describing themselves as providing 'gourmet food for Londoners on the go', Street Kitchen cook up bistro-style food from the back of a silver airstream van. Set up by Mark and Jun, who have years of culinary experience between them, Street Kitchen has grown rapidly without losing its reputation for making great food. It's one of the more pricey choices in our list, but doesn't exactly break the bank and still comes in cheaper than a restaurant. The menu is constantly changing to make use of fresh produce – and if you really have to know what's new each day then Street Kitchen even have a mobile phone app to let you know!

With their retro pink and green Citröen H Vans, Luardo's are not difficult to spot. They're most often parked up at Kings Cross, Whitecross Street or Brockley Market and if you're a regular festival-goer you'll probably already know them already), serving up Mexican cuisine in the form of real value-for-money burritos, at around £4–£5 a pop – just choose your filling from a list of the meats and standard burrito ingredients.

How many people decide to throw in their job as a New York City corporate lawyer to flip burgers? That's the story behind this black and silver van, which serves up great burgers all over town. There are just three burgers to choose from, plus medium cut fries with the skins left on. The meat, which is sourced from independent farms across the UK, will melt in your mouth and is squeezed between a light and slightly sweet sesame bun. Burger Heaven.

Based in Portabello Market, this street stall serves up traditional spanish paella and is easily spotted by the three massive pans bubbling away on the stoves. It's a mouthwatering display of colourful food and attracts plenty of tourists, but these guys arguably serve up some of the best Spanish food in London and they're a friendly bunch too! It's costs just £5 for a decent plate of chicken paella (meat sourced from the Portabello butcher),  £6 for seafood, both of which contain plenty of fresh vegetables and perfectly textured rice.

If you're looking for good meat, slow-cooked to perfection with a spicy homemade sauce, then there's only one man to call… Rib Man. This guy starts his cooking at 3am so that he can have tender and juicy rib meat ready for the 9am market, and, since he closes when his stall sells out, you want to make sure you don't leave it too late either. The Rib Man serves pulled-pork in a bun for £6 and you can add to that either BBQ sauce or one of his homemade concoctions (aptly named "Fuck Off" and "Christ on a Bike" sauce) that use Scotch Bonnets to create a real blow-your-head-off tang. If you're suited and booted and looking for a clean meal then this is perhaps not the place to go; otherwise, you definitely won't regret it.

Winner of 'best snack' and 'people's choice' awards at the British Street Food Awards, Yum Bun have been successful enough that they now have a permanent premises on Old Street. But, sticking to their roots, the Yum Bun van is still out and about serving food across London, as well as at summer festivals. For just £3.50 you geta chinese steamed bun with a choice of fillings (pork, duck, salmon and more), with seasonal additions from time to time. The buns are perfectly soft and the fillings delicious. If you're looking for a filling lunch then you will definitely be needing more than one, but for a warm snack on the go, Yum Bun is ideal.