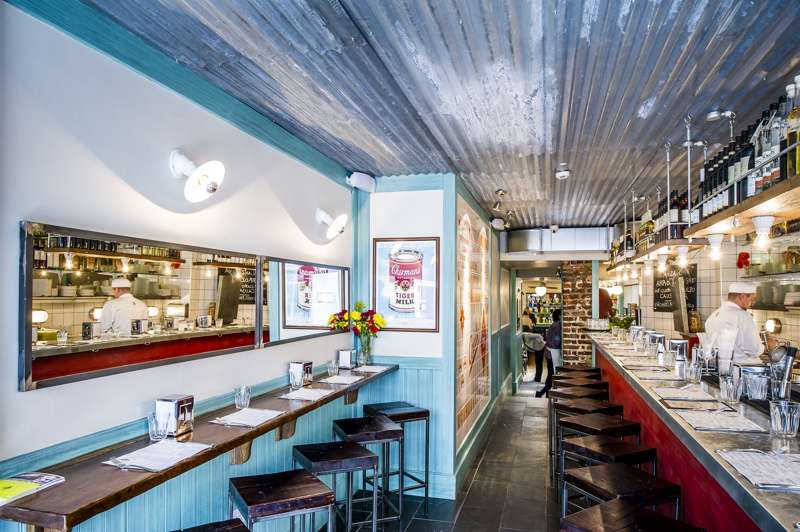 Where do you go in London during the run-up to Christmas when you're looking for a both a good night out but great food too? We asked local adventurer and travel blogger Amber Kingsley for some of her current favourite London restaurants.

Tracey McLeod in the Independent coined the term “Frankenfurter-stein” for this curious combination of  everyone's’ two favourite things, champagne and hot dogs. I am, of course, an American who travels. So naturally I feel right at home when ordering these two seemingly disparate items.  No Chicago style dog, true, but Bubbledogs attends to something that seems lacking with British street food: imagination.  I call this street food because the arrangement of Bubbledogs seems to also mix tone, with a sidebar standing and 35 tables for seating. This is a gourmet, dare I say, hot dog (or veggie dog, if you prefer), paired with “growers champagne”, indeed the single source champagnes are the focus, and the creative dogs are the novel side dish, though there's plenty of them, with choices on the menu like the Mac Daddy, topped with macaroni and cheese, crispy onions and bacon bits, a greasy dish that perfectly offsets the refined champagne.

Much has been said of Merchant’s Tavern. Not only was it hotly anticipated as another top-notch success from the folk who brought London Canteen, but its initial rave reviews still hold good fare three years in operation – no mean feat on the mean foodie streets of London.  It still feels fresh, homely yet sophisticated, both in terms of the environment and menu. Chef Neil Borthwick takes inspiration from Italian and French with cuisine, producing that combine flavors from both cuisines such as his roast quail, hazelnut pesto remoulade and foie gras starter.  It's not a place to rush: Michelin-starred dining without the Michelin prices and you’ll love the atmosphere of the restaurant alone.

It's a traditional place in its way, but this is no pub with grub, taking traditional English foods and giving them a gourmet twist, as in their duck fat chips and venison and pig’s trotter pie with buttered greens. The menu changes with the seasons, guaranteeing fresh ingredients and new flavors with every visit, and the drinks menu features a feast of cocktails, including no less than five different Bloody Marys, each with their own distinct spice and flavour ( their 'classic' bloody mary is anything but, using chorizo-infused vodka and fragrant house spices). Beagle does what so many new pubs and restaurants try to do, infusing classic dishes with modern flavurs and ingredients, and pulls it off brilliantly.

I worked with a man from Peru once, at a temp job in Chicago. He let me try some of his homemade ceviche, taught me how to make it at home, and I was hooked!  Mine is a sad imposter.  Ceviche in Soho is a re-kindling of my love for ceviche, its signature dish and a Peruvian staple. The dining room is small, but this is a cosy, convivial restaurant of the highest order, not only one of the few places in London you can try the fresh and bright flavors of this classic South American dish, but one of very few places you can eat Peruvian food, full stop. The drinks menu alone is worth the visit, not just for the wonderfully more-ish Pisco Sours but also for a choice of cocktails that expertly fuses traditional South America flavours with traditional English ingredients, such as their Black Butterfly cocktail, a complex and sweet mix that uses lavender infused pisco with English blackberries and wild nettle cordial. Like my friend, they are more than ready here to share the techniques and flavors of their diverse culinary homeland here – make the most of the opportunity!

With its lively and vibrant decor, Dishoom is no ordinary Indian restaurant.  But my friend Whitney (whom I trust for all things of taste and discernment) says she will not eat Indian food anywhere in London but here – at least not with as much pleasure. You may not trust Whitney as I do, but if nothing else just come here to try their signature black daal, the mention of which makes even the waiting staff swoon, and once you've had that you'll be hooked and working your way through the menu along with everyone else.  Apart from anything else, it's a nice concept, taking its inspiration from the traditional Bombay cafes brought to Mumbai by Persian immigrants as the restaurant is decorated with dark wooden seats and with walls lined with vintage photos. There are Bombay-inspired cocktails too and the name (in case you were wondering) is the sound effect you get in a Bollywood movie when the hero punches the baddie. Now in two locations, the original in Covent Garden and with another branch in Shoreditch.

Amber Kingsley is a freelance writer for RedSeven and has contributed to several travel blogs and sites. As an avid traveller, she loves discovering new eateries and sharing them with her fellow adventurers,